Need for a TVC in the Towns and Cities

A TVC is not a tripartite council. It is much more than that and hence can be called a multipartite committee. Each TVC is to be chaired by the Municipal Commissioner or Chief Executive Officer and consist of such number of other members as may be prescribed, to be nominated by the State Government, representing the local authority, medical officer of the local authority, the planning authority, traffic police, police, association of street vendors, market associations, traders associations, NGOs, community based organizations, resident welfare associations, banks and such other interests as it deems proper.

15. For redressal of grievance or resolution of disputes of Street Vendors there shall be a Committee consisting of a Chairperson who has been a civil judge or a judicial magistrate and two other professionals. But no government employee or the local authority shall be appointed as members of the committee.

According to 2014 Act, the appropriate government may by rules provide for the term and the manner of constituting Town Vending Committee in each local authority Depending on the rules being framed by respective states under Section 36 of the Act, the roles may vary. What is given below is a general summary and indicative of the roles of different Govt. functionaries that are emerging across India.

To Spread awareness in the context of various health and hygiene programs of the government (For this work, help can be taken from TVC, Town Lavel Federations and other street vendors associations or representatives)

Representative of Chamber of Commerce

Representatives of NGOs and Community Based Organization

The role of the representative of street vendors in the Town Vending Commission is very important. It is known that TVC is formed for the regulation and welfare of the street vendors.  Thus the TVC members have to play a pro active role in pushing the agenda of street vending.

on a regular basis, agenda is circulated before hand , consensus is built among the street vendor representatives before the meeting , minutes of the meeting are rightly recorded immediately after the conclusion of the  meeting  and minutes are circulated . The TVC should also demand that there should be an office of TVC with secretarial support and also they are issued identity card and a letter of election/appointment as TVC member.

Constitution of the TVC.

After the notification of the rules, the next step is to constitute is as per the prevision of the rules. People having questions about constitution must look into the rules regarding the procedures for constitution of the TVC. A major problem raised is how to fill the representatives of Street Vendors who are to be elected and not nominated. States are finding different methods. Here is an example from Jodhpur, Rajasthan.

In the city of Jodhpur, the ADM City II) initiated the formation of Town Vending Committee under section 22 of The street vendors (Protection of livelihood and regulation of street vending) act, 2014.. ADM visited the markets enquiring about organizations working with street vendors. In the first stage different NGOs and Organizations working with street vendors were asked to prepare a list of all the vendors who were their members stating their, name, address, sex, place of vending and type.  Vendors who were not associated with any organization was asked to submit his or her details directly. At the end of this stage approximately 400 vendors were identified.

All the vendor organizations were invited and asked to nominate names for TVC.12 people from the vendor organizations were nominated for being members of the upcoming TVC. The ADM organized a meeting for all, for discussing the process and motto of the TVC and also to organize voting process.2 people withdraw their nomination at the last moment. So all the 10 nominees were declared winner by the ADM after a through verification process. The verification process included that the nominated member’s name is there on the survey list and this will be further clarified by a personal verification by Municipal Authority and Police.

The public notification published on 18/04/2016 stated that a town vending committee needs to be formed in the city of Jodhpur where other than    representatives of vendors, 2 members from Trade Unions, RWA & NGOs will also be selected for TVC. Interested members can nominate their names for the TVC. Names could also be withdrawn by 29/04/2016. The final nominated candidates are supposed to submit self-declaration regarding his innocence and membership with the vendor organization. After this the voting would take place and only vendors are entitled to vote.

On 2nd of May 2016, TVC members were elected for TVC and on 5th May 2016 the election identity card was provided to the selected members. And on 11th May, 2016 TVC list was formed.

TVC was finally formed with the membership of different stakeholders in the city of Jodhpur: 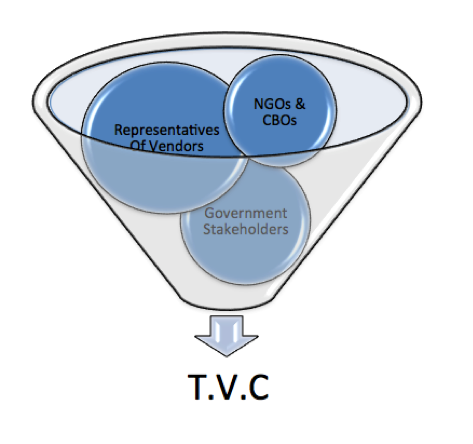 After the formation of the T.V.C a demonstration was carried out in the city so as to spread the news across the city and aware the citizen and vendors about the same. The entire process of election was completed by 2nd May 2016 and TVC was constituted on 11th May 2016.