Home  /  Status of Act  /  Progress in the implementation of the street vendors act, 2014

Progress in the implementation of the street vendors act, 2014 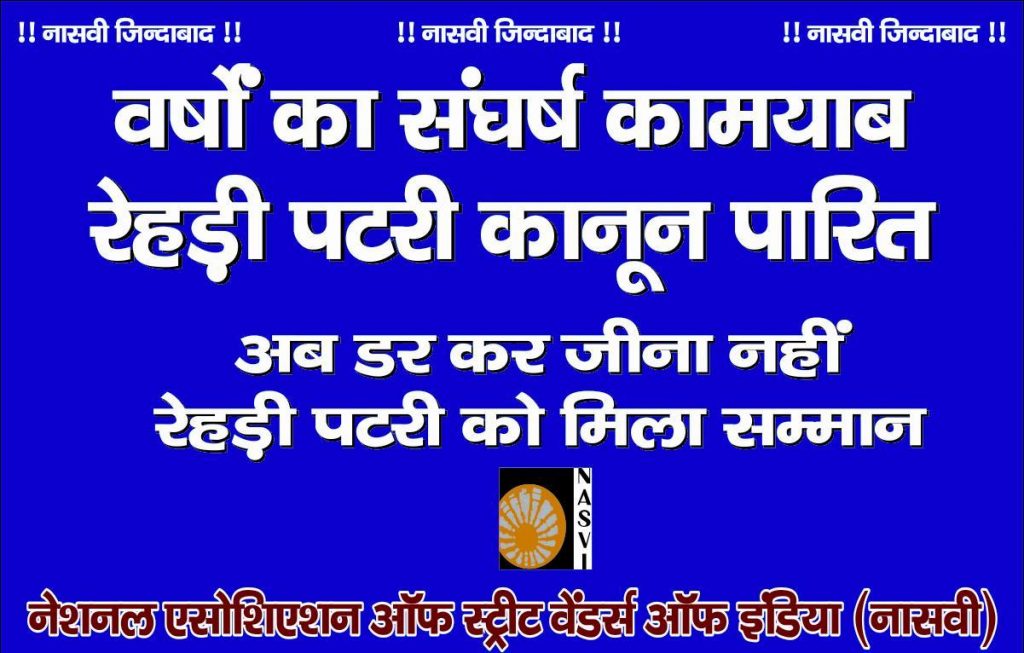 Status of the Implementation of the Street Vending Act 2014

Notification of Rules and Schemes

NASVI has been entrusted by Government of Bihar for implementation of this Act for StreetVendors in 42 towns major (ULBs) of Bihar. Town Vending Committee has been formed in 42 ULBs and is having their meetings. In Bihar, NASVI has completed biometric survey in 42 ULB and has surveyed 55,635street vendors. All the data has been uploaded on SULM website. 306 vending zones have been identified. 943 street vendors from different ULBs have been given training under the NULM component. IHM, Hajipur has been giving training for preparing safe and hygienic food under FSSAI ACT. 40122 Vendors are being linked with social security schemes PMJJBY, APY, PMJDY, PMJSBY pension schemes, Housing for all etc. They are also linked with Bihar Shatabadi, JSY. 14,103 street vendors are linked financially like opening of bank accounts, loan linkages (SEP), Mudra loan, etc.

Madhya Pradesh is still following the law it made for its state in 2012 . Municipal corporations did not start survey according to central law they only renewed old I’d cards Town wending committees were constituted but not as per guidelines and not active it’s only paper formalities. hawkers zone were established in Bhopal and Gwalior In Madhya Pradesh, TownVending committee has been formed in four district of Madhya Pradesh i.e. Gwalior, Jabalpur, Bhopal and Indore and the survey has been completed in these districts. In Jabalpur, Madhya Pradesh, 12 Vending Zones are created and some vending zones were identified in Gwalior, Bhopal etc. The process of distribution of identity card in Gwalior is under progress.

Both rules and schemes have ben formed In Rajasthan, TownVending Committee has been formed in JaipurJodhpur, Kota, Jaisalmer, Barmer and Bikaner. In Rajasthan, only in three cities i.e. Jodhpur, Mt Abu and Kota, survey has been completed. Vending Zones have been identified inJodhpur.

Rules and Schemes have been adopted. Survey completed in Chandigarh, Mohali and Jalandhar. TVC formed in Ludhiana and Mohali inPunjab.

This state has the most sensible rules and schemes and Municipal Corporations of Bhubaneswar, Cuttack, Rourkela and Berhampur in Odisha have formed Town Vending Committee for further implementation.

Rules have not been framed though scheme has been notified. TVC formed in almost all important ULBs though meetings are not being held .Survey has been conducted in ten districts – Adilabad, Nizambad,Medak ,Karimnagar, Khamam, Hyderabad, Rangareddy ,Nalgonda, Mehboobnagar and Warangal .36,076 street vendors have been identified and 17,788 have been given identity cards . Vending Zoneshavebeencreated inWarangal

In Tamil Nadu, Rules were drafted on 2 November 2015 and scheme was notified on 2 November 2015. 10 Cities constituted TVCs butthere are no regular meetings inTVCs, not completed TVCs formations in fewtowns. Survey is completed in 3 cities i.e. Trichy, Madurai, and Coimbatore and only intwocities of Madurai and Tirunavelli, ID Cardsare issued.

In Karnataka, Rules were drafted on 13 May 2016. TVC is formed in Mysore and Mangalore only. Mangalore created a vending zonewhere half of its vendors were adjusted. Distributing of ID cards is underprogress. Morethan50000 ID cardshasbeendistributed acrossKarnataka.

In Delhi, Ruleswere notified on 7 January 2016. Schemewas notified on 7 January 2016, but Delhi high courtput stayonthe Scheme. Surveyhas beendoneonly intheNDMCarea butitwill not beapplicable as it was not done according to street vendors act. Vending Zone has not been identified or created till now. Delhi vendors faced lot of problem which has taken lot of our time. Markets after markets were evicted. We got the scheme stayed from the High Court still vendors faced problems. Finally High Court gave a stay against eviction which it however amended later saying that the no vending zones which were declared in the past would continue .Thus in Delhi only one Municipal Body, the NDMC has constituted Town Vending Committee and even this could not function because of stay of HighCourt.

In Chandigarh, Rules and schemes have been formed. Survey has been done by a private agency. TVC has been constituted but active vendor leaders have been ignored .

State government has notified rules on 18 October 2016 but no schemes has been formed till now. Vending zone are not created or either identified by the state government. No TVCs are formed till now but the advertisement for the formation of TVC in Baroda has been placed in newspapers. Survey has been conducted in8 small ULBs .

InHP, rules and schemes have been formed. Survey has been carried out in 10 towns. Vending zone has been created in the seven districts .. 294 ID cards has been issued till now.

Both schemes and rules have been formed by the state government. TVCs have not been created or neither survey conducted by theTVCs. Survey completed only in Palakkad District. Vending Zones are not created. ID cards have been distributed inPalakkad.

Rules were drafted on 3 August 2016. But no schemes are formed till now. TVC is formed only in Pune. But till now no survey has been done though a survey was conducted in Mumbai No rules and schemes are formed in Arunachal Pradesh, Goa, Meghalaya, Mizoram, Nagaland, Puducherry, Sikkim, Tripura, Jammu& Kashmirand WestBengal.

Street Vendor Law and the Judiciary

The Street Vendors’ Act 2014 was enacted the law on 4.3.2014 and came into force on 1.5.2014, as The Street Vendors (Protection Of Livelihood and Regulation of Street Vending) Act, 2014. It has overriding effect on all other laws as per Section33 of the said Act.

TheAct under Clause 3 (e) of the First Schedule prohibits declaration of any area as no-vending zones or vending zones or restricted vending zones until survey as provided under the Act has been carried out and the Plan for street vending has not been formulated. This read with Section 3 of the Act mandates that no existing hawker/vendor shall be evicted or relocated until the survey as envisaged under the Act is completed and the certificate of vending is issued to all street vendors. It is clear that the language of the Act is categorical that all existing street vendors are to be provided the benefit and protection of theAct. Therefore, any claim and the averment by the authorities that there is a ‘no hawking zone’ existing prior to the enactment of the Act is false and baseless. Further, the claim that vendors are “illegal” seeking their removal, is wholly false and cannot be entertained or sustained in law.Indeed, it has been held by the Division Bench of the Delhi High Court that any vendor who has been removed in contravention of theAct, must be restored.