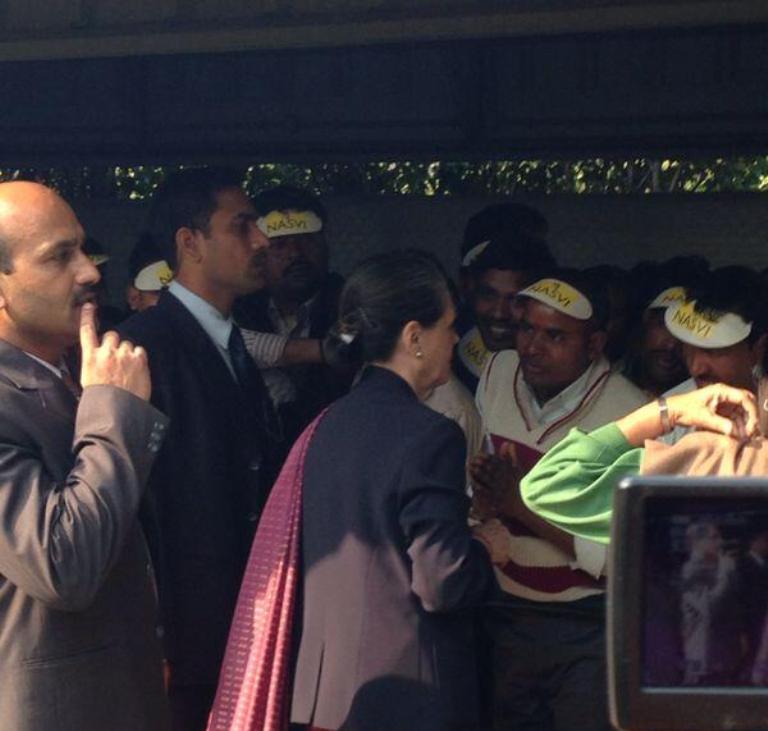 But, Police and Municipal agencies in Delhi have launched anti-street vendor backlash across several markets

Brutal attack on street vendors in Okhla area in Delhi by police and MCD officials, seven street vendor leaders were sent to jail


Even before the President of India puts his ink on the Street Vendors (Protection of Livelihood and Regulation of Street Vending) Act passed by the Indian Parliament last week, the legislative development in favour of street vendors has sent shock waves to the marauding police and municipal officials across national capital and the authorities have started launching backlash against the street vendors in many markets in Delhi including Okhla, Vasant Kunj and Janpath.

On Thursday, thousands of street vendors under the banner of National Association of Street Vendors of India (NASVI) marched to the residence  of UPA chairperson Sonia Gandhi demanding immediate stop on the anti- street vendor backlash unleashed by the police and municipal agencies.

The street vendors led by NASVI national coordinator Arbind Singh urged Ms. Gandhi to see to it that the Ministry of Home Affairs instructs Delhi Police Commissioner to ensure ‘no extortion of money and eviction of street vendors’ till settlement of all vendors as per the mandates of the law. They also congratulated Ms. Gandhi for pushing forward the legislation.

It reads, “Despite the fact that the Indian Parliament has accorded a new deal to the street vendors by passing the Street Vendors (Protection of Livelihood and Regulation of Street Vending) Bill, the police and the municipal agencies in Delhi have unleashed new rounds of terror across several markets. In fact, the passage of the legislation has badly disturbed the police and the municipal agencies as they see potentials in the legislation which harm their ‘parallel economy of extortion from street vendors.”

The memorandum cites cases of harassment and extortion of money from street vendors in Okhla and Vasant Kunj areas of national capital and says, “Last month, on 15 January, the street vendors who had been earning their livelihood in Vasant Kunj area in Delhi were beaten up and displaced by the policemen after they refused to pay extortion money to the cops and South Delhi municipal officials. The worst part was that the four street vendors were taken away by police in the name of getting medical checkup done, but after other vendors dispersed, instead of medical checkup, false cases were lodged against them. On 17 January, a large number of street vendors held protest demonstration at the Delhi Police headquarters and sought time from the police commissioner. But, he refused to meet the vendors. Yesterday, on 26 February, the police and the MCD officials launched eviction of street vendors in Harkesh Nagar Sabzi Mandi in Okhla area of Delhi after the vendors refused to pay extortion money.  Many carts of vendors were damaged, goods were confiscated, hard earned money was forcibly taken, vendors were beaten up and even women vendors were abused. The police also arrested seven street vendors, clamped non-bailable charges against them and sent them to jail”.

The memorandum demands of the Union Home Minister to give written instruction to the Delhi Police Commissioner to ensure an end to extortion of money from street vendors.  It also demands mandatory registering of FIR against cops and municipal officials after complaint by any street vendor, no police support to the municipal authorities raiding street vendors, registering of FIR against those cops and municipal officials who demanded extortion money and beat vendors in Vasant Kunj and Okhla areas after the vendors refused to pay and the withdrawal of cases lodged against street vendors.

Ms. Gandhi promised that she would take up the matter with the union home minister.

The Bill passed by both houses of parliament has several provisions to protect livelihood, social security and human rights of those more than ten million urban street vendors who have been facing several barriers and onslaughts of the municipal bodies and the police across cities and towns of India.