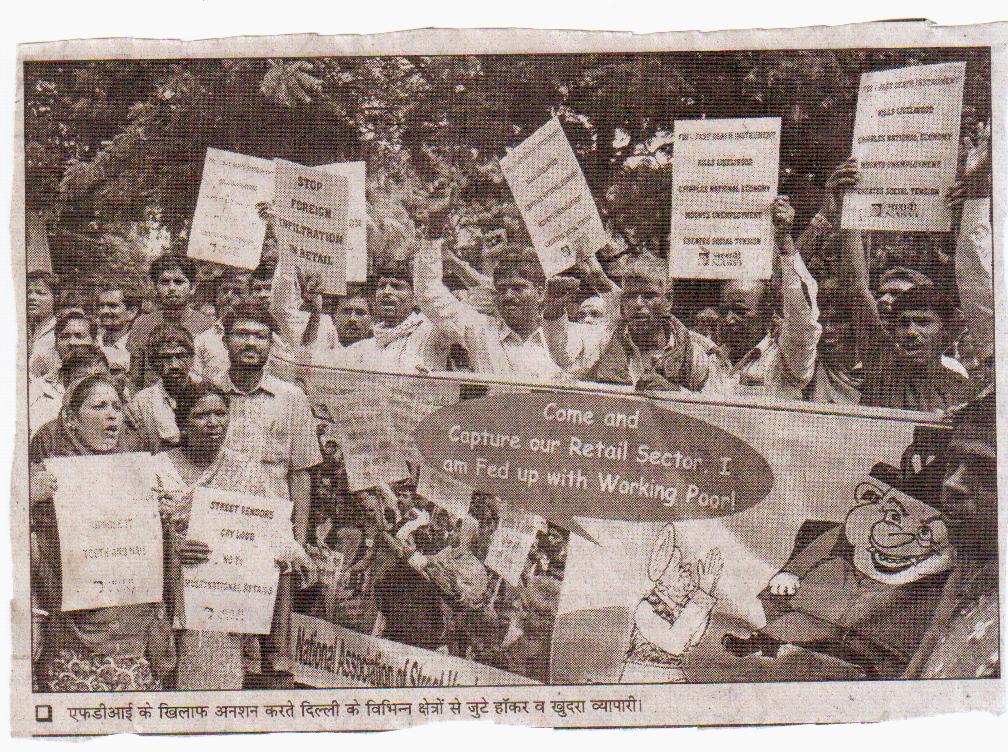 Thousands of street vendors and small retailers across several cities on Wednesday responded to the ‘Anti- FDI Protest’ call given by the National Association of Street Vendors of India (NASVI) by coming on to the streets shouting slogans like ‘FDI is national disaster for working poor, Protest it tooth and nail’ and ‘Indian Prime Minister suffers from foreign investment complex’.

The protesting vendors charged the government with ignoring and dishonoring the voices of the working people and protecting the interests of the multinational retail giants. The agitators warned the government that if it does not retreat on disastrous FDI decision, they would storm to the Prime Minister Office (PMO) and the Union Commerce Ministry.

Leading the street vendors march and demonstration at Parliament Street in Delhi, the national coordinator of NASVI Arbind Singh said that at one level the UPA government was introducing the Bill to protect livelihood of street vendors, but on the other allowing multinational retail giants to further threaten the livelihood of vendors. It is not overcoming what the corporate and a section of mainstream media call ‘policy paralyses, the fact remains that the government, particularly the prime minister has ‘foreign investment complex’.

He also found official government arguments diversionary and said that small farmers and consumers would certainly not get benefitted and a new class of middlemen patronized by multinational retailers would emerge. The inflation would not come down, prices of essential goods would further escalate and incidence of labour rights violation would be regular.

“FDI, in essence, means direct foreign infiltration into domestic economy and it would ruin the retail and help the realty sector as the move would create demand of mall and real estate developers for retail space”, Mr. Singh added.

He said, “Last year when we had come out on the streets against the FDI and many political parties and state governments had also opposed the move, the government was forced to retreat. But, now, the regime in Delhi has finally succumbed to the pressure of foreign multinational companies.” He warned that if the government does not retreat on the issue of FDI in retail, the street vendors would storm to the PMO and the Union Commerce Ministry.

The nationwide anti- FDI protest day marked marches, demonstrations, sit in and effigy burning in several cities down south from Palakkad, Cochin, Chennai, Mysore, Vijayawada and Hyderabad to Kolkata, Bhubaneswar, and from Mumbai, Pune, Surat, Bhopal, Jodhpur, Jaipur, Chandigarh, Ludhiana to Haridwar, Dehradun, Kanpur, Lucknow, Varanasi, Patna and Guwahati. Everywhere the vendors and small shopkeepers came out on streets protesting against the government’s decision to allow the FDI in retail. At several centers in Uttar Pradesh and Bihar, the agitating vendors thanked their respective state governments for opposing the decision of the central government.