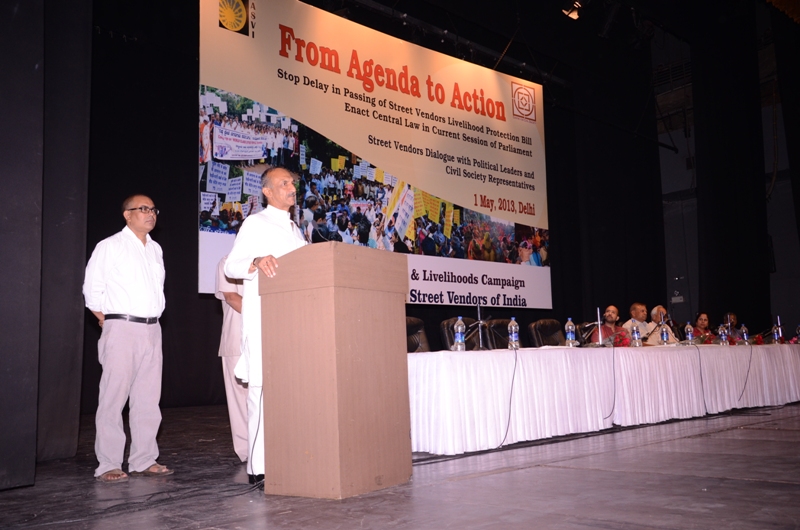 New Delhi, 1 May:  Smiles and cheers prevailed among thousands of street vendors’ representatives on  International Labour Day at the” Street Vendors Dialogue with Political Leaders and Civil Society Representatives’ in Delhi .  The national dialogue was organized by the NASVI with support from Centre for Civil Society.

Mr. Maken who was to address the street vendors’ convention could not turn up because of his presence in the Cabinet meeting.

The Bill vetted by the cabinet incorporates the issue of inclusion of vendors doing their business on railway lands.  Earlier version of the Bill had excluded the railway vendors and the NASVI had strongly objected to the exclusion.  The revised Bill also has greatly empowered the Town Vending Committee (TVC) and given it power to decide ultimately on almost all issues of determining the vending zones. The Bill does also have strong grievance redressal mechanisms.

Mr. Singh urged all political parties and their Members of Parliament to give a thumping support to the Bill in both houses of the parliament.

Describing an inclusive and effective central law as a critical social-political imperative of urbanizing India, NASVI coordinator  said, “Once enacted by the parliament, the Act would go a long way in protecting the rights and entitlements of street vendors who earn their livelihood in tough and harsh conditions in cities and towns across India”.

Based on the recommendations of the Parliamentary Standing Committee on Urban Development, the revamped Bill vetted by the Union Cabinet makes the proposed Act having overriding effect over all state and municipal laws  as well as the Police Acts.

The Bill states, “ The provisions of this Act shall have effect notwithstanding anything inconsistent therein contained in any other law for the time being in force or in any instrument having effect by virtue of any law other than this Act.”

The Bill states that at least 2.5 per cent of a city’s population would be eligible for vending licences and it would be mandatory to form Town and Zonal Vending Committee in each and every city. Such committees would have 40 percent representation of elected representatives of vendor organizations, 10 per cent of NGOs and rest of town planners, administrators, police and elected peoples representatives.

Earlier in the day, more than a thousand street vendors’ leaders from several states joined the National Dialogue at Kamani Auditorium in the national capital and raised their concerns over the delay in passing of the Bill. The main purpose of organizing the dialogue was to build momentum on getting effective central law in the current session of parliament through bringing key stakeholders together in support of early enactment of Street Vendors (Protection of Livelihood and Regulation of Street Vending) Act.