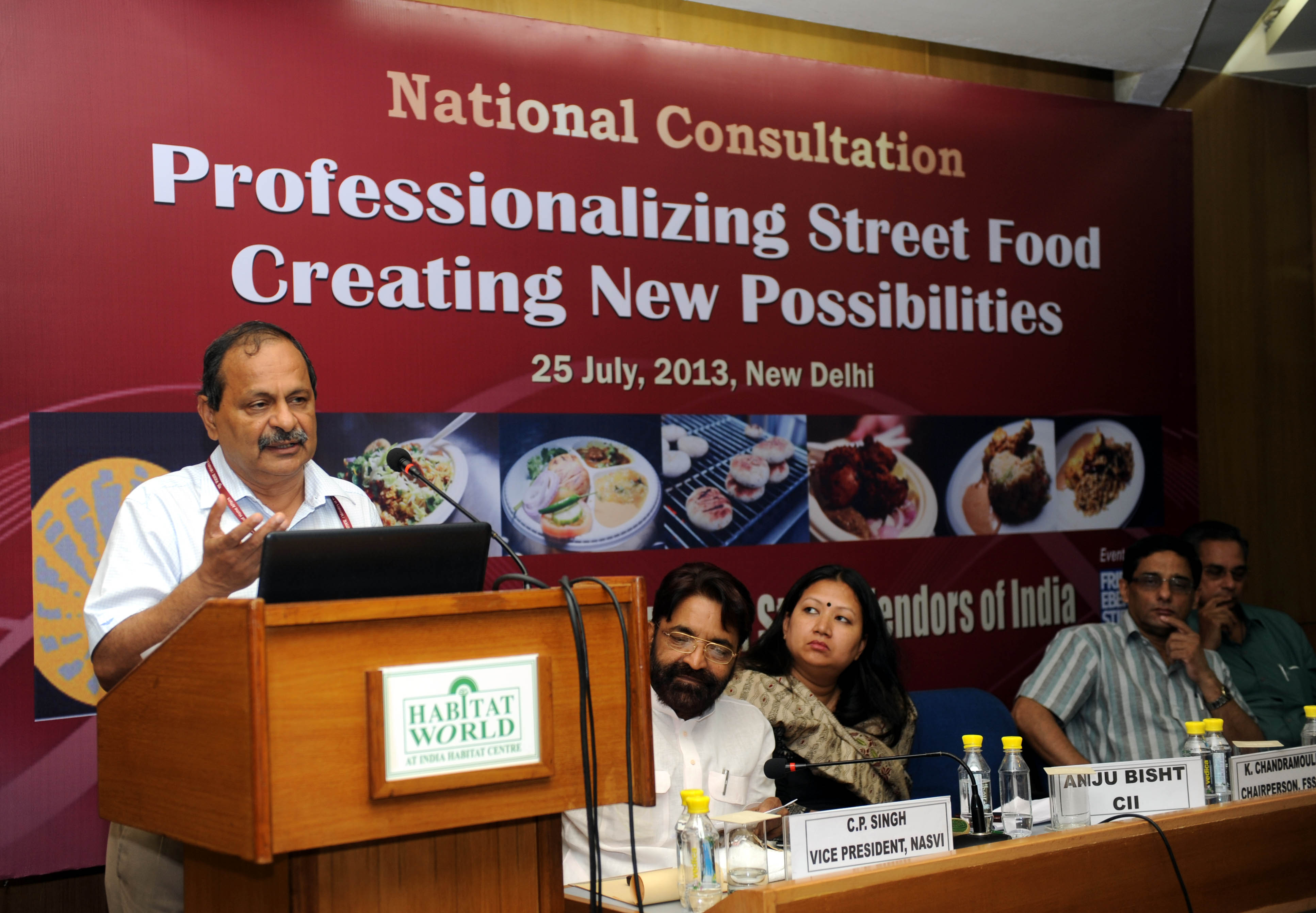 The street food advocacy campaign gained momentum on Thursday with street food representatives, food, health and nutrition experts and social entrepreneurs asserting at a national consultation organized by the National Association of Street Vendors of India (NASVI) here in Delhi that the country needs to tap the huge potentials of street food vending sector for employment generation, food and health security and growth of tourism. The street food advocates demanded of the government to formulate a national policy for preservation and professionalization of street food.

They also called for creation of food streets and street food courts in cities and towns, hygiene and health trainings of street food vendors and support for entrepreneurship development of food vendors. The activists and experts urged the media institutions, particularly the journalists and the food critics to go beyond glamourizing and pitching for high end restaurants food and beverages and vouch for promoting the street food culture. The consultation was organized on the theme of “Professionalizing Street Food and Creating New Possibilities”.

Speaking at the consultation as chief guest, the chairperson of the Food Safety and Standards Authority of India (FSSAI) K. Chandramouli said that the FSSAI had notified the Food Safety and Standards (Licensing and Registration of Food Businesses) Regulations under which food and beverage firms, manufacturers and vendors including companies in the unorganized sector had to be registered and licensed and the regulations had helped street food vendors get legitimacy in several cities.

He, however, added, “a lot still have to be done. We admit that the implementation is a huge challenge and multi sectoral synergies are needed to professionalize the street vended foods.”  Mr. Chandramouli said that the FSSAI had constituted a ‘Committee on Street Foods’ and being a member of the committee NASVI had been engaging with the food safety and health departments across several states.

Mr. Chandramouli said, “the unorganized food operators constitute approximately ninety per cent of the total food business operators of the country and coordinated efforts should be made to protect their rights. We have to ensure administrative sensitivity and responsiveness towards street food vendors as they also have equal stakes in overall mission of food safety and security.” He asked NASVI to develop a simple Standard Operating Procedure Manual and submit it to the FSSAI. The FSSAI would call a meeting of all state food safety commissioners and health officials for proper implementation of the manual, he added.

Speaking on the perspective and purpose of the consultation, NASVI national coordinator Arbind Singh said that building commitment among key stakeholders to professionalize street food in an era of high marketization, expanding food distribution system and growing concerns for hygiene and health is the need of the hour. He emphasized on organizing the disorganized street food vendors, training them on hygiene and health and providing them legitimate urban space to vend.

Mr. Singh said, “ though late, but in recent years a great churning has begun in India on how to professionalize the age old street foods and tap their potentials in mitigating poverty, creating employment, ensuring food security and health standards, and boosting economy and tourism.” He welcomed the recommendation of the parliamentary standing committee on industry to create a ‘Retail Regulatory Authority’ to  monitor the entry of foreign chains through foreign direct investment (FDI) and study the impact of FDI on medium, small and micro enterprises (MSME).

NASVI coordinator said, “There is a common perception that the street food vendors are disadvantaged because there is usually no support from formal institutions to improve their businesses or protect them from external influences. In 2010, the government of India came out with a ‘Scheme of Up gradation of Quality of Street Food’ to ensure economic sustainability and betterment of the livelihood of street food vendors. The scheme had two components, one being developing Safe Food Towns and the other being creating Food Streets. Unfortunately, the scheme proved to be a non-starter as the Ministry of Finance and the Planning Commission did not support the scheme.”

The senior functionaries and consultants of Confederation of Indian Industries (CII) Deepak Mathur and Anju Bisht made a presentation on food safety sensitization initiatives and stressed on the importance of food safety and quality. They announced that the CII would engage with NASVI in its new intervention project which includes street food.

A large number of health and nutrition experts, food critics, social entrepreneurs, and officials and functionaries of health department as well as officials of municipal bodies joined the consultation.