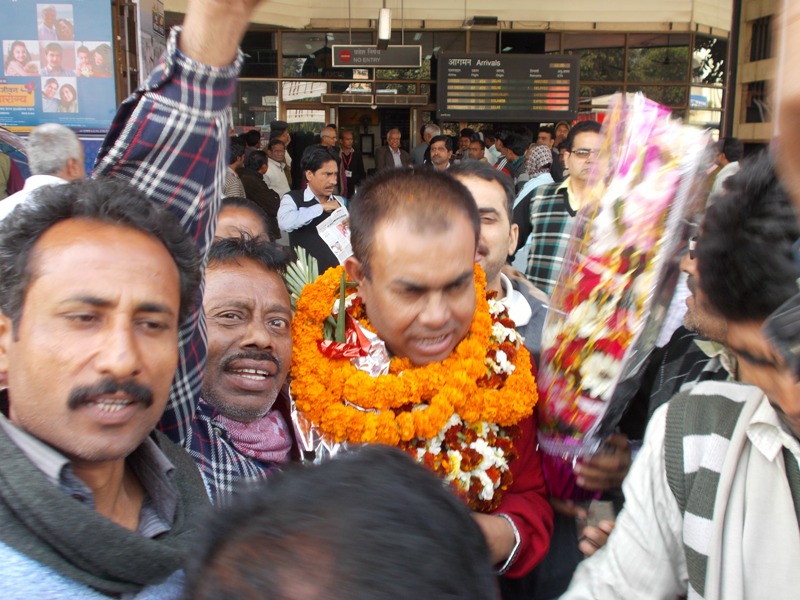 A large number of street vendors and other informal workers on Wednesday morning thronged at Patna airport to receive and welcome  a leading social activist Arbind singh reaching the city from Delhi. The jubilant informal workers gave a warm welcome to Mr. Singh for spearheading the national struggle of street vendors for comprehensive central legislation and getting it passed by the parliament.

Mr. Singh is the national coordinator of National Association of Street Vendors of India (NASVI) and the founder of the Nidan, a well known social development organization working for the informal workers, women and children.
Acknowledging the affection of the working poor and expressing gratitude to them, NASVI leader said, ” We fought together and won together. It is not the effort of one person, thousands of street vendors under the banner of NASVI struggled for years to get an inclusive law to protect their livelihood and social security. The sustained struggle and hard advocacy efforts influenced the government to ensure enactment of the law. The law has the potentials to put stop on the reign of loot and terror of municipal bodies and police”.

“We would ensure that the law is implemented properly in all urban areas of Bihar. We would accelerate the process of organizing among street vendors and massive organizing would lead to federalization of street vendors at city and state levels. We are committed to bring cheers in the lives of those who toil hard, build and sustain the city, but remain marginalized” , said Mr. Singh.

NASVI leader also thanked the civil society organizations, enlightened members of political society and several activists, academics of Patna and elsewhere for their consistent solidarity and support to  the informal workers’ rights movement.
The Street Vendors (Protection of Livelihood and Regulation of Street Vending) Bill was passed by the parliament last month on 19 February.
The UPA chairperson Sonia Gandhi and the Congress vice president Rahul Gandhi batted strongly in favour of the legislation.