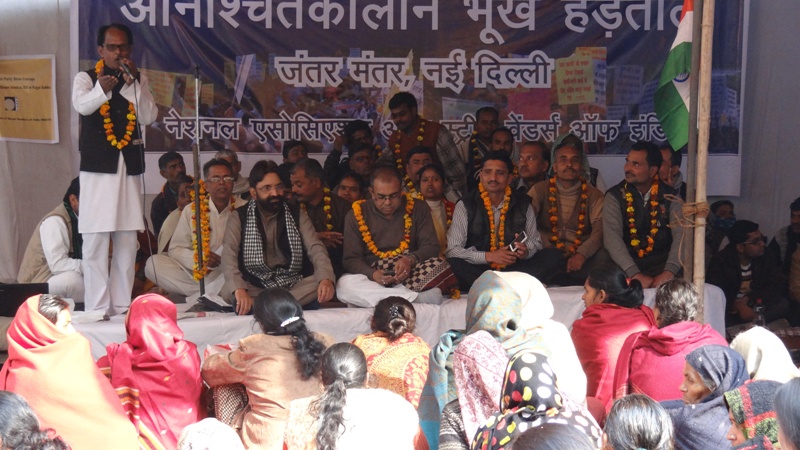 Responding to the call given by the National Association of Street Vendors of India (NASVI), a strong contingent of more than 500 street vendors launched their ‘indefinite hunger strike’ at Jantar Mantar in Delhi on Sunday afternoon demanding immediate passage of the Street Vendors (Protection of Livelihood and Regulation of Street Vending) Bill by the Rajya Sabha.

NASVI national coordinator Arbind Singh has also joined the fasting street vendors. On Sunday evening, Mr. Singh announced, “Enough is enough. We would fight to the finish to reclaim the rights of street vendors. The political parties would not be allowed to do nasty politics over the livelihood of street vendors.”

Several street vendors of Ludhiana, Ahmedabad, Jabalpur and Patna are also participating in the hunger strike.

“We suffer daily at the hands of corrupt police and municipal inspectors. They harass us, humiliate us and demand extortion money. This must stop. We need safe space, dignity and voice”, said Ram Karan, a fruit vendor of Badapur of Delhi.

“A strong law protecting our livelihood can only put brake on loot and terror of khaki clad people and municipal officials. Such people need to be put behind bars. Except such people, a large section of society recognizes our contribution and respects us for our labour and pain”, a street vendor leader of Jabalpur, Gopal Singh Lodhi said.

Ram Kumar, a street vendor leader of Shadipur in west Delhi said, “BJP is humiliating tea vendors and other sections of vendors. It is doing politics in the name of ‘ chai, chai’. Such politics should stop. The BJP leaders should not stop our bill in the Rajya Sabha. They should show moral and political courage and support the passing of the bill.”

Shriram, an agitated street vendor leader of Prabhu Market in south Delhi who have had faced and witnessed many rounds of forced eviction since 2010 Commonwealth Games, asked the members of Rajya Sabha, “ Come and clarify, why do not you be condemned and protested for not passing street vendors’ bill.”

Several street vendors and their leaders including those of Vasant Kunj, Okhla, Chandni Chowk, Janpath, India Gate, Narela, Shahdara and Sarojini Nagar are participating in the hunger strike.