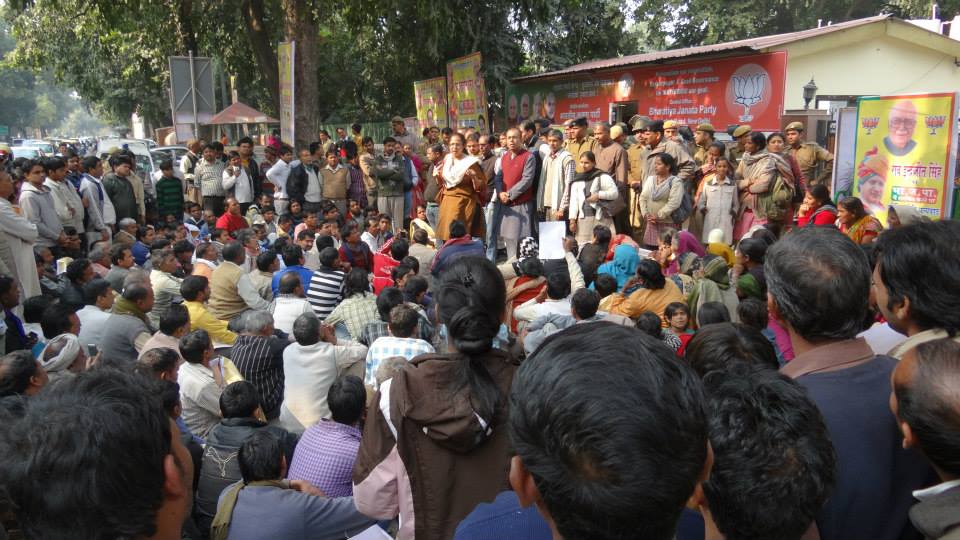 Similar protests in other cities

The Bhartiya Janata Party (BJP) on Thursday faced wrath of angry street vendors in Delhi and several other cities for trying to obstruct the Street Vendors (Protection of Livelihood and Regulation of Street Vending) Bill in the Rajya Sabha a day ago. The street vendors under the banner of National Association of Street Vendors of India (NASVI) staged a militant protest demonstration at the BJP central office in the national capital and targeted BJP leader Ravi Shankar Prasad for, what NASVI said, ‘trying to sabotage a crucial bill having bearing on livelihood of millions of street vendors’.  The protesters shouted slogans like “Chai Chai Bolte Ho, Chai Walon aur Rehri Walon Ke Pet Par Laat Marte HO” [You Speak Tea, Tea, Tea, But You Attack Livelihood of Tea Vendors and Other Street Vendors]. The main entrance of the BJP central headquarter remained jammed for hours.

The street vendors’ body also charged Mr. Prasad with playing nasty game between Patna and Delhi. “On 8 February, nearly a thousand street vendors had met BJP leader Ravi Shankar Prasad in Patna demanding passage of the bill in the Rajya Sabha. Talking to the representatives of NASVI and city based street vendor organizations in Patna, Mr. Prasad had assured them that once it is taken up in the Rajya Sabha, the BJP members would not stall it, rather pass it in a minute.  But, on Wednesday, he changed his colour in Delhi and obstructed the passage of the bill”, NASVI national president Manali Shah said while leading the street vendors at the BJP office at Ashoka Road in Delhi.

Ms. Shah called upon the parliamentarians in the Rajya Sabha to fully support the passage of the Street Vendors (Protection of Livelihood and Regulation of Street Vending) Bill which holds several provisions to make cities inclusive, participatory, resilient and vibrant.

“The political class needs to ensure that the right to secured and dignified livelihood of street vendors is protected through legislative instrument and accountable municipal and police governance.  The reign of extortion and terror of police and municipal agencies must stop and the realtors be barred from usurping the retail space in urban settings”, said NASVI president.

Currently the street vendors’ bill is listed in the business schedule of the Rajya Sabha. It was passed by the Lok Sabha on 6 September, 2013.

Last month, thousands of street vendors had joined the ‘Rehri Patri Sansad’ organized by NASVI at Jantar Mantar in Delhi. It was addressed among others by Delhi chief minister Arvind Kejriwal.

This month, on 3 February, a large number of street vendors had also marched up to the doorsteps of Congress vice president Rahul Gandhi’s residence demanding passage of the bill by the upper house.

Last week, NASVI had also released an open letter to the heads of political parties urging them to ensure that the bill is passed by the Rajya Sabha.

In Patna, a large number of street vendors protested at the BJP state office and denounced the political hypocrisy of BJP leaders like Ravi Shankar Prasad.