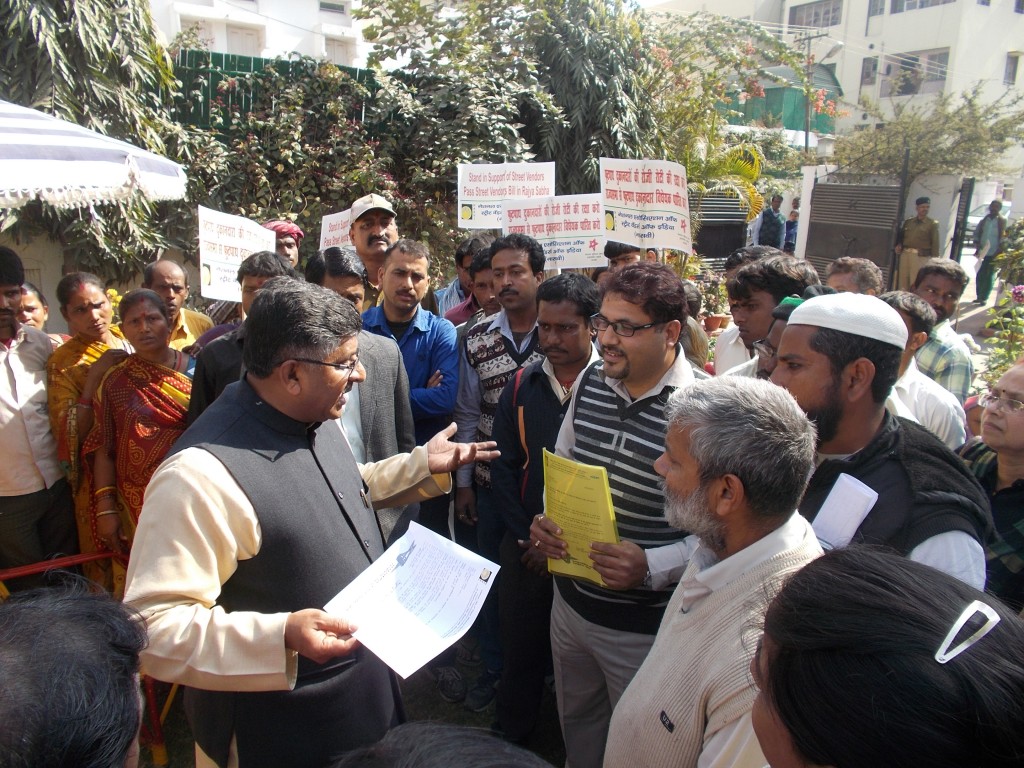 The agitated street vendors also marched to the residence of Mr. Prasad calling upon him to ensure that the bill is passed by the upper house. The street vendors strongly resented the persistent adjournments of the houses of parliament and appealed to the parliamentarians of the BJP to stop stalling crucial bills having major bearings on the livelihood of working poor like street vendors.

Later, talking to the representatives of NASVI, Nidan, National Union of Informal Workers and city based street vendor organizations, Mr. Prasad assured them that once it is taken up in the Rajya Sabha, the BJP members would not stall it, rather pass it in a minute. “We are committed to protect the vital interests of street vendors. India needs such legislation.”

“The political class needs to ensure that the right to secured and dignified livelihood of street vendors is protected through legislative instrument and accountable municipal and police governance.  The reign of extortion and terror of police and municipal agencies must stop and the realtors and the mafias be barred from usurping the retail space in urban settings”, NASVI representatives said.

The street vendors’ bill is pending in the Rajya Sabha. It was passed by the Lok Sabha on 6 September, 2013.

Last month, thousands of street vendors joined the ‘Rehri Patri Sansad’ organized by NASVI at Jantar Mantar in Delhi. It was addressed among others by Delhi chief minister Arvind Kejriwal.

This month, on 3 February, a large number of street vendors had also marched up to the doorsteps of Congress vice president Rahul Gandhi’s residence in the national capital demanding passage of the bill by the upper house.

Just four days back, NASVI had also released an open letter to the heads of political parties urging them to ensure that the bill is passed by the Rajya Sabha.

The bill awaiting the nod of the upper house holds many promises for the beleaguered street vendors. It has several provisions to protect livelihood, social security and human rights of those more than ten million urban street vendors of India who have been facing several barriers and onslaughts of the municipal bodies and the police across cities and towns.

The bill states that at least 2.5 per cent of a city’s population would be eligible for getting vending certificates and it would be mandatory to form Town and Zonal Vending Committee in each and every city. Such committees would have 40 percent representation of elected representatives of vendor organizations, 10 per cent of NGOs and rest of town planners, administrators, police and elected peoples representatives.

The proposed legislation greatly empowers the Town Vending Committee (TVC) and gives it power to decide ultimately on almost all issues of determining the vending zones.  It does also have strong grievance redressal mechanism. The most salient feature of the legislation is its overriding effect over all state and municipal laws as well as police acts.