Loss of Income, Debts, Police Harassment: A Street Vendor’s Suffering In The Pandemic 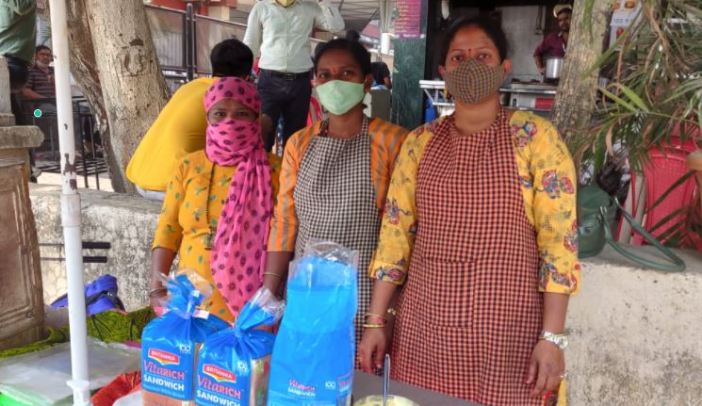 Anu, Archu, and Kavita are three sandwich sellers who set up a small stall together outside a corporate office. They have been cooking and selling sandwiches there for 7 years! Until the pandemic swooped in, and their business came to a standstill for almost 7 months.

“The lockdown days were very hard to get by. Everyone was sitting at home and there was barely any income through my husband’s job. We used to stand in long lines to acquire our ration. The food quality was also inferior; the rice given was rotten and used to have insects in it,” said Archu.

Archu also worked in a company for two months where she earned a meager salary of Rs.150 per day for working for about 8 hours. After extending to 12 work hours to get the bonus, she used to then go home and complete the housework without any break. Even now with the ease of the lockdown, the struggles of these women street hawkers haven’t allayed. They struggle to sell out and their daily earnings have dwindled by 50%.

Millions of stories like these are scattered across the streets of cities like Mumbai during the pandemic. The Street Vendors Act 2014 defines street vending as the “vending of articles, goods, wares, food items or merchandise of everyday use or offering services to the general public, in a street, lane, sidewalk, footpath, pavement, public park or any other public place or private area, from a temporary built-up structure or by moving from place to place and includes hawker, peddler, squatter and all other synonymous terms which may be local or region-specific.“

Anu, Archu, and Kavita are three sandwich waalis who set up a small stall together outside a corporate office. They have been cooking and selling sandwiches there for 7 years! Until the pandemic swooped in, and their business came to a standstill for almost 7 months.

The street vendors make up4% of the workforce across urban India. These street entrepreneurs run a parallel economy with a turnover of 80 crore per day. They survived on the city’s hustle and bustle until it succumbed to the lockdown. Then the empty streets couldn’t embody their livelihoods. Many of the street vendors are migrants from UP, Bihar and West Bengal—this gives us a predetermined insight into their oppression during the lockdown or otherwise.

The Institute of Social Studies trust conducted a study on women street vendors. Their findings were no less than horrifying as 97.14% of the women surveyed reported that they were adversely affected by the lockdown.

Many of them had to dip into their modicum of savings as their daily cash influx reduced drastically. They faced issues in paying their rents and procuring essential goods; those who took loans were caught in the vicious spiral of a debt trap. Even the vendors who were allowed to sell fruits and vegetables with restrictions were fraught with difficulties. The wholesale markets were hard to access and various other street vendors shifted to selling fruits and vegetables which fermented chaos in the sector.

The effects of the pandemic fell lopsidedly on the women street vendors. Work piled up for women in households as one of them said, “There is no lockdown for a woman. Earlier if we used to make tea two times, now it is 4 times a day.” The nature of their workplace also makes the women vendors vulnerable to physical and sexual harassment. For women entrepreneurs who sold tailored clothes on the streets, their work protected them against domestic violence and exploitative relationships.

Additionally, police harassment was an issue for many, as we also saw videos of forceful evictions and overturned carts around the internet. In fact, this unlawful situation is not incipient. In 2013, The National Association of Street Vendors of India raised their voices vilifying the increasing harassment and violence against the street vendors, especially women, by the police and municipal authorities. Another study reported that street vendors spend approximately 10-20% of their income on bribes or penalties.

Most street vendors were also not given identity cards, masks, sanitizers and other protective equipments by the government. The government did launch a relief package called PM Street Vendors Atma Nirbhar Nidhi scheme which provides them with microcredit facilities by granting them loans up to Rs. 10,000. However, the creaky government machinery led to a lot of malfunctions in its implementation.

This is connected to the Street Vendors Act 2014 which was formulated to protect the rights of street vendors in urban India. Adhering to the Act, the state governments were ordered to form Town Vending Committes (TVCs) to provide social and other benefits to vendors with identity cards/certificates. But the numbers of registered street vendors are grossly underreported due to a lackadaisical implementation of the Act.

Now, for instance, to avail the loan a street vendor in Delhi will have to get a letter of recommendation from the Municipal Corporation in Delhi. “While getting the letter, the MCD looks at various aspects along with the fines charged by the police on the hawkers. Since nearly all the hawkers have received a fine due to the lack of a certificate, hardly anyone benefits from the scheme,” said Mohammad Irshad, a TVC member.

The effects of the pandemic fell lopsidedly on the women street vendors. Work piled up for women in households as one of them said, “There is no lockdown for a woman. Earlier if we used to make tea two times, now it is 4 times a day.” The nature of their workplace also makes the women vendors vulnerable to physical and sexual harassment.

Moreover, many street vendors do not possess active bank accounts. And when they have been living off their savings in the lockdown, a new loan is only going submerge them further under debts.

When I asked Anu, Archu, and Kavita about this they informed me that they had registered with the Municipality around 6 years back. However, neither did they hear back from them nor did they avail themselves any social benefits. They also said that they didn’t take the Rs. 10,000 loans because the money would barely help them and they were asked to pay Rs. 350 to access it.

Thus, with so many structural barriers the relief scheme has rendered futile. What would rather benefit them is a direct income or cash transfer to revive their businesses and make up for the losses.

The government efforts have mostly been directed towards the formalised sector; therefore, there isn’t a comprehensive data on the losses faced by the street vendors. As India saw a 40% drop in consumer demand, the streets went eerily quiet, the cramped trains went empty, and the footpaths once robust with the street vendors stood still. The ripple effects of the vanished street vendors were felt throughout. Their cheap and affordable food and clothes catered to the marginalised sections of our society.

Be it Mumbai’s Vada pav or Delhi’s Gol Gappe: all of them and more are etched into the cultural heritage of our cities. The potential of street vendors is under-explored in our economy; thus, they are marooned to a life of poverty. A methodical implementation of policies, laws and schemes can help uplift the urban poor of India.