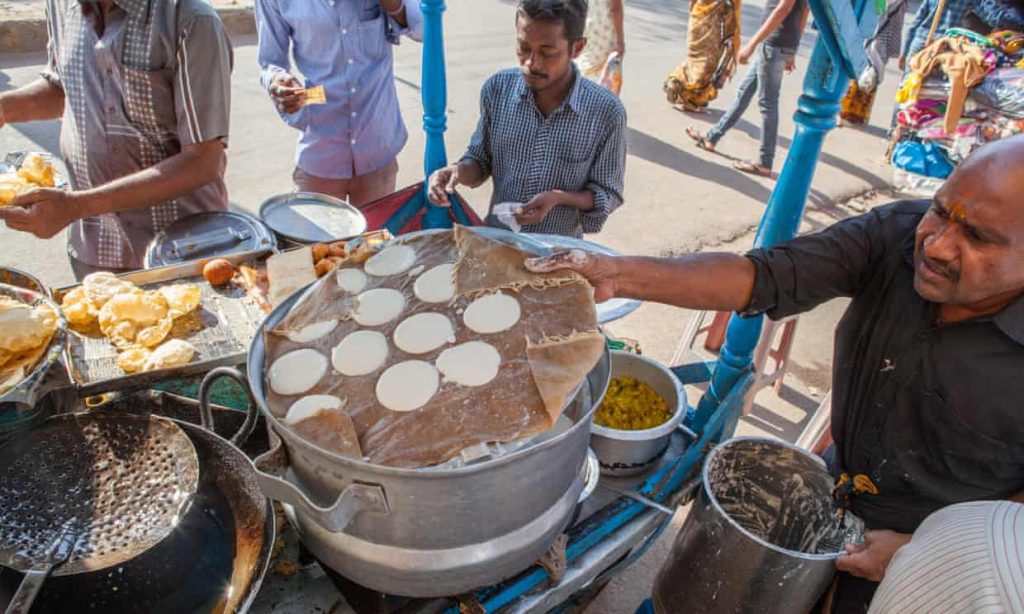 Food stalls provide a livelihood for millions of people in India, but have been badly hit by the pandemic. Photograph: BMD Images/Alamy

On a normal working day, Venkateshwara Rao would be ready by 4pm, stationed on the pavement waiting for office workers to emerge and order their favourite varieties of idli and dosa from his bandi, a food cart grandly named Kavyajyotika Tiffin Centre.

“When the lockdown was lifted, but with many restrictions still in place, the inflow of customers plummeted. However, the last few weeks have been good with a handful of workers back in offices and people lining up for takeaways at my bandi,” says Rao.

Carts such as Rao’s, called bandi in the local Telugu language, have long doled out affordable breakfasts and late-night dinners to thousands of IT professionals, students, and workers in the 450-year-old city of Hyderabad, India’s emerging IT hub.

Here, just a month before the pandemic hit, Amazon opened its largest campus outside the US. Microsoft and Google are already in the city, bringing in people from different regions of India.

Venkateshwara Rao, owner of Kavyajyotika Tiffin Centre.
Venkateshwara Rao, owner of Kavyajyotika Tiffin Centre. Photograph: Madhusudhan J
These workers rely on the bandis, close to 100,000 mobile food-carts and stalls dotting the alleys and pavements near the residential and commercial complexes, for their daily food and drinks. The bandis serve as hang-out spots during office breaks, where workers can catch up over their food or cup of tea.

Before Covid, bandis provided a livelihood to almost 12% of the city’s population and contributed to Hyderabad being designated a Unesco Creative City of Gastronomy in 2019.

According to an ILO report (2018), the informal sector accounts for 88.2% of India’s labour market. In urban areas, these informal workers are usually as street vendors, home workers, domestic staff and waste pickers; with street vendors making up 14% of the sector.

Running a business from the pavement brings its own share of uncertainties, and the pandemic is proving to be the biggest of them all.

Until new laws were introduced in 2014, “there was no scope for protecting the livelihood rights and social security of urban street vendors”, says Arbind Singh, national coordinator of the National Association of Street Vendors in India, an advocacy organisation working with more than a million sellers.

The pandemic restrictions have hit the bandi traders hard, with many shutting up shop and migrating back to their villages. “Our family managed to sail through the lockdown with the meagre savings we had. Many of the other vendors aren’t so fortunate,” says Rao.

The Indian government launched a micro-credit scheme in June 2020, to provide affordable loans to street vendors. While the scheme has had a positive response, Rao hasn’t opted for it as he is confident of recouping his lockdown losses in the coming months.

‘We are worried’: Indians hopeful but anxious as vaccination drive begins
Read more
More than 3 million street vendors have applied, over 50,000 of them from Hyderabad alone. “One of the major benefits of this scheme is that it’s speeding up the streamlining process of identifying and legitimising genuine street vendors who possess no valid identity cards until now,” says Singh.

However, with many people apprehensive about eating out and employees working from home, Hyderabad’s bandis face an uncertain future.

“It’s better to have fewer customers and earn a little, than keep the bandi shut and see our savings dwindle,” says Rao, as he goes to prepare an order for a consultant working from home. He can only hope the customers will come back, and soon.