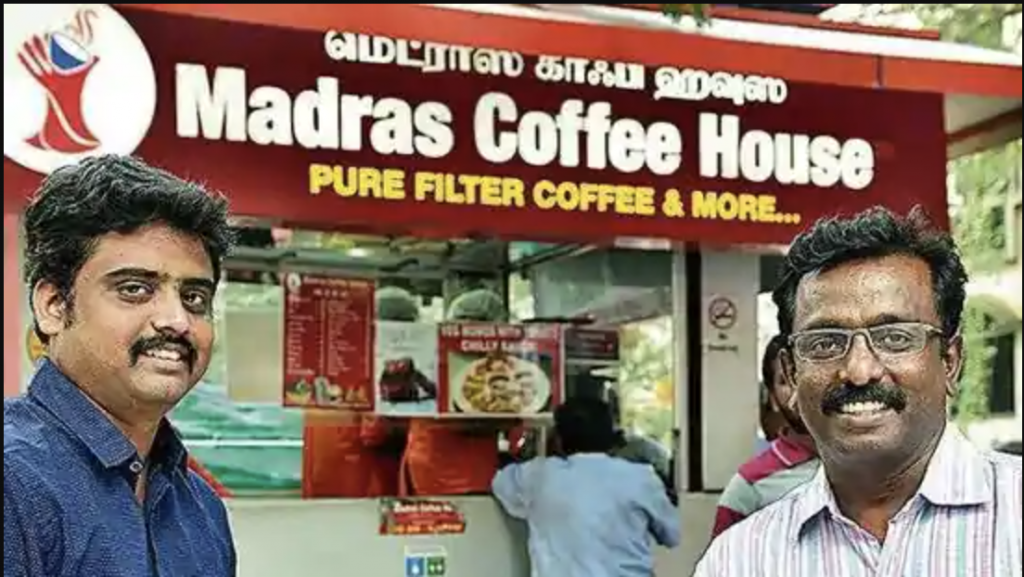 Identifying an opportunity to encash the city’s love for authentic coffee, two friends, Prasanna Venkatesh and M Kumaaravelan, set up an enterprise called Madras Coffee House in 2010.
By Divya Chandrababu

Chennai may be synonymous with filter coffee but the streets of the coastal city are dotted with tea stalls. The steel glass-and-tumbler drink is found only in homes and vegetarian restaurant chains. Identifying an opportunity to encash the city’s love for authentic coffee, two friends, Prasanna Venkatesh and M Kumaaravelan, set up an enterprise called Madras Coffee House in 2010.

The company, with its signature bright red kiosks serving freshly brewed filter coffee, started with one outlet and grew to 85 across the country by 2020. By 2019, it had 400 employees and an annual turnover of ₹25 crore.

But the Covid-19 pandemic, and the nationwide lockdown, forced them to shut 50 outlets, mostly in IT hubs, as techies worked from home and offices remained deserted for months.The company also slashed its staff strength to 200.

“We are facing a huge revenue cut as I-T parks were our biggest market and their employees are working from home,” said Venkatesh. Flyers are their second big source of revenue but with air travel down, there are fewer customers at the airport.

Originally from Madurai, Venkatesh’s dream to open a food business drove him to quit his job as a medical sales representative in 2008 to move to Chennai. He befriended Kumaaravelan whose family was linked to the hotel industry. “I approached Kumaaravelan to sell lime soda in one of their hotels,” recalled Venkatesh.

Two years later when Kumaaravelan got an opportunity to run a food stall inside an IT park, he roped in Venkatesh. “To get a good filter coffee in Chennai, you have to park your vehicle and go to the big chains of vegetarian restaurants. The coffee sold in tea stalls is not good. So we wanted to offer people good filter coffee,” said Venkatesh.

Small food and beverage companies such as Madras Coffee House suffered major losses during the pandemic as people preferred home-cooked food and didn’t venture out, or go to restaurants.

“Although the government announced interest-free loan for street vendors, very few were able to avail it because of strict government conditions,” said Arbind Singh, national coordinator of National Association of Street Vendors of India.

The government had launched Pradhan Mantri Swanidhi Yojana, a loan-based scheme, for stree vendors on June 1.

Venkatesh and Kumaaravelan fear a severe financial shortfall this year and want the government to make three promises in the Union budget. First, allowing small businesses like theirs to claim input tax credit; second, support small businesses by postponing loans; and three, make subsidised loans available. Input Tax credit is where businesses, while paying tax on output (sale of product), can claim reduction paid on their input, such as purchases.

“GST rate on restaurants was slashed from 18% (for AC) and 12% (non-AC) to a uniform 5% in November 2017. Under the lower rate, they can’t claim input tax credit against the tax they paid for equipment, raw materials and rent. If we had a higher GST of 12% like when it was first announced, it would have helped us even during the lockdown,” said Venkatesh.

“Government should also offer help to regular tax payers like us. Banks take a lot of time to process our papers. How can we repay loans when our income is heavily slashed? Our industry needs a more business-friendly budget.” he added.