Legislative Developments in favour of Street Vendors: Remembering the Struggles and Celebrating the Gains 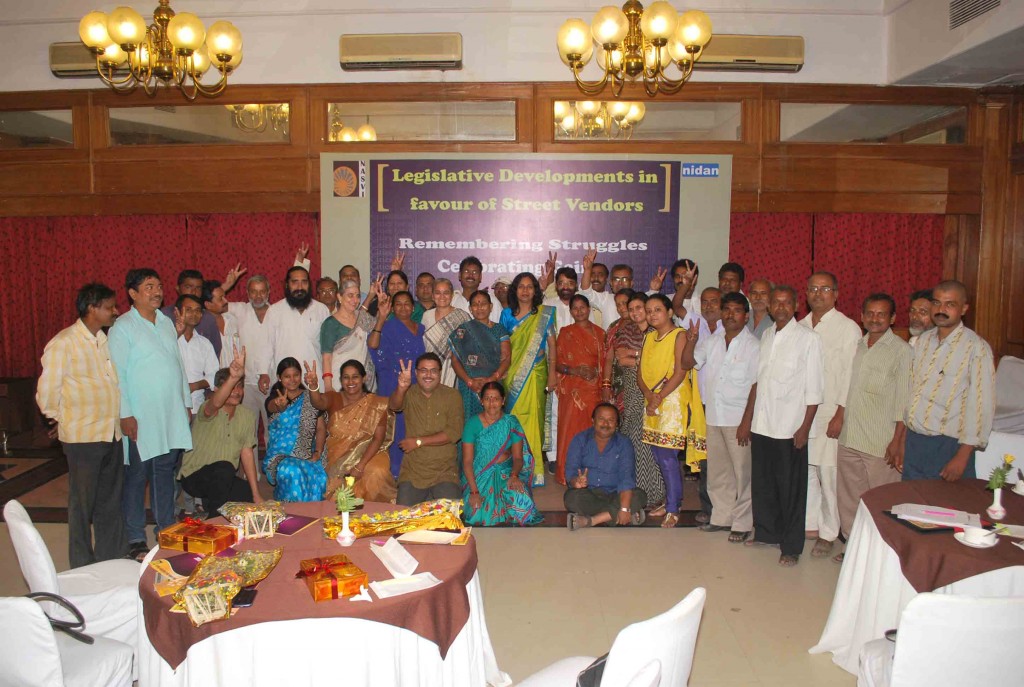 Eminent jurists, administrators, labour experts and development activists on 30 September in Patna averred that the development politics aiming to empower the working poor needs to take center stage in India. They maintained that the success of any policy or law depend upon how it triggers organizing among the people and how the governance structures implement it. They agreed that the governance bodies did need to take riddance of their anti-poor bias and become responsive and accountable to those millions of toiling population who contribute so much to the society and the economy, but remain marginalized.

The experts and the rights activists were taking part in a consultation on ‘ Legislative Developments in favour of Street Vendors: Remembering the Struggles and Celebrating the Gains’ organized by the National Association of Street Vendors of India (NASVI) and Nidan at hotel Pataliputra Ashok in the state capital of Bihar.

The National Advisory Council (NAC) member and renowned social security expert Mirai Chatterjee and SEWA national coordinator Renana Jhabvala were felicitated in the consultation for their contribution to the causes of street vendors and sustained support to the NASVI.

The consultation was organized in the backdrop of the Lok Sabha passing the much awaited Street Vendors (Protection of Livelihood and Regulation of Street Vending) Bill early this month and the subsequent order of the Supreme Court of India directing all state governments and the UT administrators to ensure formation of Town Vending Committee (TVC) within two months and registration of all street vendors within four months.

Addressing the consultation the National Advisory Council (NAC) member and labour rights expert Mirai Chatterjee said that inclusiveness embodied in itself the elements of economic, social and political empowerment of the working poor. “The economic growth strategies often falter and fail as those do not integrate the poor and vulnerable in economic planning and development”, she said.

Ms. Chatterjee elaborated on how the NAC took up the issue of central legislation for street vendors, recommended to the government to bring in such legislation and provided key inputs to the Ministry of Housing and Urban Poverty Alleviation during the course of drafting the bill.

Eminent informal workers rights campaigner and SEWA Bharat president Renana Jhabvala shared on the efforts for reclaiming the rights of street vendors and the history of jurisprudence related to street vending in India.

Describing central legislation for street vendors as a ‘ legislative bulwark against the reign of terror unleashed by the police across cities and towns’ NASVI national coordinator Arbind Singh hailed the passage of the street vendors bill in the Lok Sabha and the landmark order of the apex court.

He said, “Once enacted, the legislation would go a long way changing the faces of Indian cities and towns. The cities are changing rapidly and several opportunities are coming up.  Once legalized and protected, the street vendors also would be able to avail those opportunities as they too have equal stakes in missions of development and democracy.”

“The institutionalized participatory planning mandated by the law would not just bring succour to the street vendors, but also show the path for bringing positive change in the lives of other sections of urban poor”, Mr. Singh added.

The consultation was presided over by trade unionist and NASVI vice president Chandraprakash Singh.

Street vendor leaders of several parts of Bihar also participated in the consultation and shared their issues and stories with administrators and academicians.