Historic Street Vendors Law Comes into Force on MAY DAY 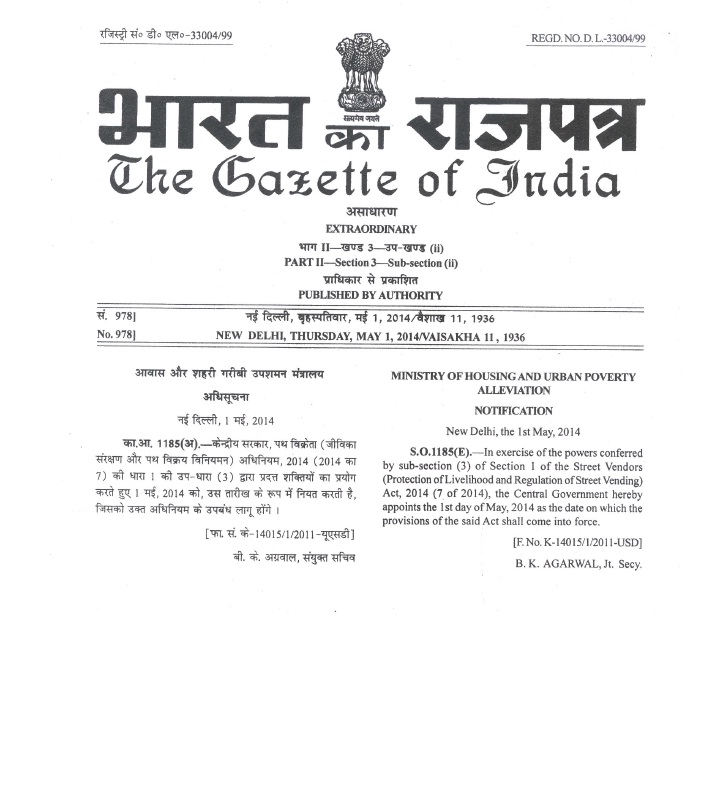 NASVI welcomed the historic Street Vendors (Protection of Livelihood and Regulation of Street Vending) Act 2014 which came into force on May 1st. This is first of its kind in the world and in human history.

The historic Street Vendors (Protection of Livelihood and Regulation of Street Vending) Act 2014, on Thursday came into force. The Street Vendors ACT 2014 mandates municipalities to set up restriction free vending zones/ night bazaars where hawkers can sell their wares without being harassed by the authorities. Presently, there is no law to regulate and safeguard the interest of urban street vendors in India.

The new statute makes it obligatory on part of the state governments and local municipal bodies to ensure that every street vendor gets security and protection of livelihood. The ACT provides for security and protection of livelihood to all street vendors having a vending certificate to be issued by the Town Vending Committee. Its implementation will directly benefit close to two crore street Vendors of India who do not have any sort of protection at present.

The Act states that at least 2.5 per cent of a city’s population would be eligible for vending licences and it would be mandatory to form Town and Zonal Vending Committee in each and every city. Such committees would have 40 percent representation of elected representatives of vendor organizations, 10 per cent of NGOs and rest of town planners, administrators, police and elected peoples representatives.

Hailing the commencement of Act on Labour Day Mr.Arbind Singh National Coordinator of National Association of Street Vendors of India said “It is very important that these poor vendors are enabled to pursue their livelihoods in a congenial and harassment free atmosphere. This Act is a step towards inclusive growth as it aims to integrate street vendors into urban India and also sets new paradigm for participatory of urban management.