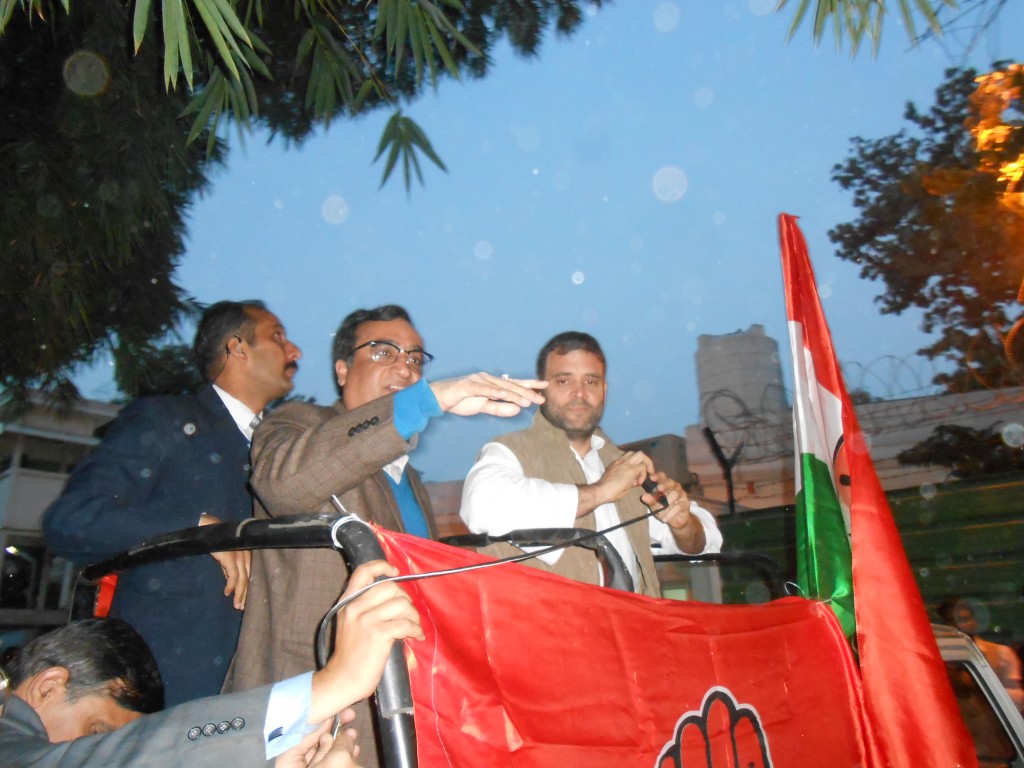 Rahul Gandhi announces, “We’re committed to protect rights and entitlements of street vendors. The bill would be passed and zero tolerance would be maintained on incidence of human rights violations”

With just forty hours remaining  from the commencement of parliament session, thousands of street vendors under the banner of National Association of Street Vendors of India (NASVI) on Monday marched on the streets of Delhi and reached right up to the doorsteps of  the residence of Congress vice president Rahul Gandhi demanding passage of  the Street Vendors (Protection of Livelihood and Regulation of Street Vending) Bill by the Rajya Sabha and freedom from rampant extortion and terror of police and municipal agencies.

After listening to the tales of exploitation and plight of street vendors in a huge ‘Rehri Patri Mahapanchayat’, the Congress vice president assured them that their rights and entitlements would be protected at all costs and the government would pass the street vendors bill in the Rajya Sabha. Mr. Gandhi said, “ The Ministry of Home Affairs and the Delhi Police would be asked to maintain zero tolerance on incidence of human rights violations”.

On behalf of street vendors, NASVI national coordinator Arbind Singh handed over a five page memorandum to Mr. Gandhi and urged him to ensure that the street vendors bill is passed in the coming session by the Rajya Sabha. Mr. Singh demanded immediate end to the menace of extortion of money by police forces and municipal authorities.  NASVI leader called several street vendors of different markets of Delhi to narrate how they had been harassed and victimized by the cops and the municipal inspectors.

“We have time and again stated that an inclusive central legislation in favour of street vendors is the critical social-political need of the urban India. The cities are changing and several opportunities are coming up, but the working poor like street vendors are being deprived of availing those opportunities. Millions of street vendors continuously face barriers and onslaughts of the municipal bodies and the police across cities and towns of the country. We strongly believe that a comprehensive central legislation would go a long way putting brakes on such barriers. The integration of street vendors in the city planning and development processes would change the faces of the cities. The growth of the city would be sustainable and the cities would be for all”, NASVI memorandum says.

It adds, “We sincerely believe that if the bill does not get passed in the Rajya Sabha in the coming session of parliament in February, many gains achieved in last two years would get wasted and the street vendors would certainly feel defeated and demoralized”.

“Just after three days, the Supreme Court of India also gave a landmark order on 9 September, 2013. In its order, the Supreme Court has directed all state governments and the UT administrators to ensure formation of Town Vending Committee (TVC) within two months and registration of all street vendors within four months. The direction would be binding till the enactment of the central law to protect the livelihood of street vendors. The key direction no. 15 of the Supreme Court order reads, “All the existing street vendors / hawkers operating across the country shall be allowed to operate till the exercise of registration and creation of vending / hawking zones is completed. Once that exercise is completed, they shall be entitled to operate only in accordance with the orders/directions of the concerned Town Vending Committee.”, the memorandum notes and it adds, “ Delhi police and municipal bodies are showing scant regard to the order of the apex court”.

The key demands raised in the memorandum include:

1.   The Ministry of Home Affairs gives written instruction to the Delhi Police Commissioner to strictly comply with the Supreme Court Order and put an end to extortion of money by threatening their eviction/removal by cops.

2.     There must be mandatory registering of FIR against cops and municipal officials after complaint by any street vendor. A  DCP rank officer must be designated for looking into complaints of extortion and registering

3.     No police support to the municipal authorities raiding street vendors

4.     Registering of FIR against those cops and municipal officials who demanded extortion money and beat vendors in Vasant Kunj area after the vendors refused to pay on 15 January and the withdrawal of cases lodged against street vendors

5.  Immediate opening of India Gate for street vendors and hawkers

On Municipal Bodies Role in Delhi

2.     Issuing of vending licenses and declaration of Vending Zones