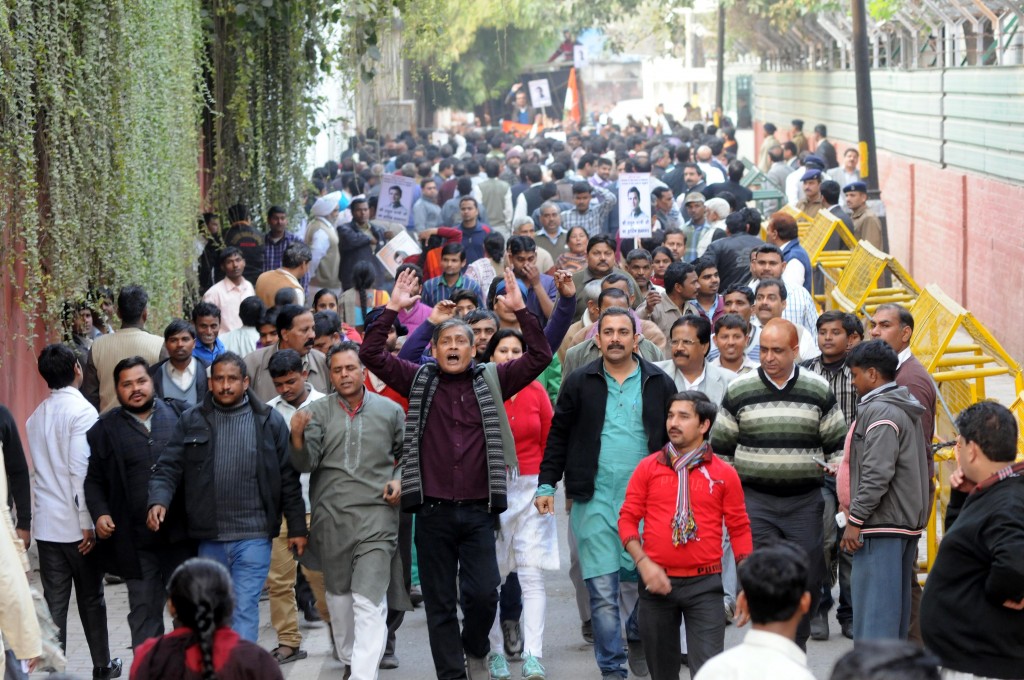 The Heads of Political Parties

Subject: Street vendors’ request to ensure passage of street vendors’ bill by Rajya Sabha in coming session of parliament commencing from tomorrow and end to harassment and extortion by police and municipal authorities

Street vendors constitute a major mass of urban poor. They represent the informal/unorganized sector of retail industry and stand in sharp contrast to organized retailers like hypermarkets, supermarkets and big retail chains. They contribute immensely to local economy and provide affordable services to cross sections of society.  And, in performing that, they stand quite independent as they do not depend on government subsidies or private charity.

Street vendors contribute to the growth of the cities, but their own growth gets retarded. Poor municipal governance and vested urban interests perpetuate their marginalization and compound vulnerabilities. The realtors court to the municipal authorities and the police personnel to execute plans to chase away the vendors and hawkers and when they find it hard to do, they relocate the poor to the peripheries of the city where services are poor and livelihoods opportunities are scarce.

Extortion is a big menace for street vendors. It is a big scar on the face of the civic bodies and the police. It runs in hundreds of crores every year. The municipal inspectors and the police station area constables collect money from vendors and in cases of denial by the vendors, the incidence like arm twisting, harassment, victimization and forced eviction takes place.

Growing livelihood insecurity, atrocities of police-municipalities and attacks on human dignity of street vendors who spend more than 10 hours a day in vending and associated work are major cases/indicators of human rights violation in the city.

The level of harassment is such that it undermines the fundamental right of the street vendors to carry on their businesses to earn a descent living as mandated by several international human rights treaties, international and national courts as well the Indian Constitution.

Last month, on 15 January, the street vendors who had been earning their livelihood in Vasant Kunj area in Delhi were beaten up and displaced by the policemen after they refused to pay extortion money to the cops and South Delhi municipal officials. The worst part is that the four street vendors were taken away by police in the name of getting medical checkup done, but after other vendors dispersed, instead of medical checkup, false cases were lodged against them.

On 17 January, a large number of street vendors held protest demonstration at the Delhi Police headquarters and sought time from the police commissioner. But, he refused to meet us.

This is just one story. As mentioned above, the street vendors in almost all areas/markets tell the same gory stories of excesses by the cops and the municipal officials.

The street vendors can never even dream for proper social security cover. There are several Acts and schemes, such as the Unorganized Workers Social Security Act and the Rashtriya Swasthya Bima Yojna (RSBY) under which the street vendors fall, but the lack of proper implementation of those deprive them of their entitlements.

Financial inclusion remains a pipe dream with formal banking institutions flouting the norms and the directions of the national regulator Reserve Bank of India (RBI) which mandate the banks to reach out to informal workers in camp based mode. Despite the RBI making the self declaration a valid proof of an individual, the banks adopt cumbersome process and betray a strong anti-poor bias. The lack of accessibility to formal financial services often lands the vendors in the trap of blood sucking moneylenders.

The street food vendors in many cities confront peculiar situations. They play a very critical role in the urban food distribution system and add to the colour and beauty of the city, but their culinary acumen and expertise is demeaned. Despite the facts that the Ministry of Food Processing and Industries formulated a scheme for street food vendors and the Food Safety and Standards Authority of India (FSSAI) initiating proper regulation of street food vending through constituting a National Committee on Street Foods, the street food vendors often bear the brunt of authorities.

Over the years, the street vendors have suffered a lot, but have also struggled at many fronts. The sustained struggle of street vendors across states and the engagement of the National Association of Street Vendors of India (NASVI) with the political society  led to legislative development in the Lok Sabha which passed the much awaited Street Vendors (Protection of Livelihood and Regulation of Street Vending) Bill last year.

Just after three days, the Supreme Court of India also gave a landmark order on 9 September, 2013. In its order, the Supreme Court has directed all state governments and the UT administrators to ensure formation of Town Vending Committee (TVC) within two months and registration of all street vendors within four months. The direction would be binding till the enactment of the central law to protect the livelihood of street vendors.

The key direction no. 15 of the Supreme Court order reads, “All the existing street vendors / hawkers operating across the country shall be allowed to operate till the exercise of registration and creation of vending / hawking zones is completed. Once that exercise is completed, they shall be entitled to operate only in accordance with the orders/directions of the concerned Town Vending Committee.”

We have time and again stated that an inclusive central legislation in favour of street vendors is the critical social-political need of the urban India. The cities are changing and several opportunities are coming up, but the working poor like street vendors are being deprived of availing those opportunities. Millions of street vendors continuously face barriers and onslaughts of the municipal bodies and the police across cities and towns of the country. We strongly believe that a comprehensive central legislation would go a long way putting brakes on such barriers. The integration of street vendors in the city planning and development processes would change the faces of the cities. The growth of the city would be sustainable and the cities would be for all.

We sincerely believe that if the bill does not get passed in the Rajya Sabha in this session of parliament in February, the street vendors would certainly feel defeated and demoralized.

In the above context, National Association of Street Vendors of India (NASVI) is spearheading campaign across cities and calling upon political parties to stand in support of street vendors’ labour rights campaign.

We call upon you to kindly ensure that the Street Vendors (Protection of Livelihood and Regulation of Street Vending) Bill is passed by the Rajya Sabha in this session of parliament commencing from 5 February.