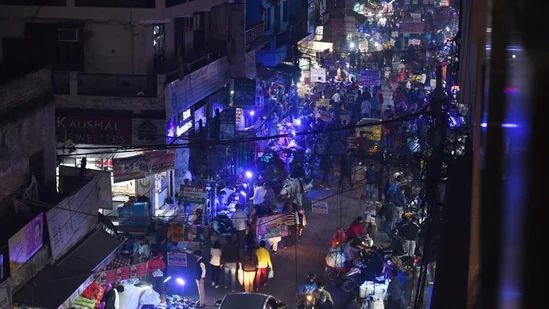 The National Street Vendors Association of India (NASVI) has alleged several shortcomings in the recently concluded surveys of street vendors by the town vending committees. They said the committees have identified only 71,347 street vendors during the survey between January 1 and September 30, 2021, adding that according to their assessment there were at least 200,000 street vendors in the capital.

According to the data provided by the three municipal corporations, the North Delhi civic body has surveyed the maximum, 27,819, vendors in its six administrative zones, the south corporation counted 23,951 vendors and 19,577 street vendors were counted by the east civic body. Maximum vendors have been found in the central, south and City-Sadar Paharganj zones.

He added that the surveying agencies have failed to consider street vendors in low-income areas and non-market areas. In some cases, they failed to recognize that some street vending activities occur at specific times in some areas. “If the survey teams do not visit the commercial areas at different times, they will fail to capture the real situation on ground,” he added.

NASVI said that even the street vending Act recognizes that 5% of population could be engaged in street vending activities. According to the North MCD report, the civic body teams have surveyed 5,912 people in City Sadar Paharganj zone, 4,018 in Karol Bagh, 2,861 in Civil Lines zone, 5,334 in Keshav Puram zone, 5,080 in Rohini and 4,614 in Narela zone. Similarly, the south corporation has identified 8,140 street vendors in Central zone, 7,789 in South zone, 4,350 in West zone and 3,672 in Najafgarh.

A senior municipal corporation official said the exercise is being undertaken through empanelled agencies in all municipal wards. “The survey report will be used for providing certificates to the street vendors so that they are regularised, and do not face eviction,” the official explained.

“The survey reports will be put in the public domain and feedback will be sought,” the official said.

NASVI has also written to Chief Justice of India alleging that street vendors have been excluded in places like Nehru place, Chandni Chowk, Sarojini Nagar and Lajpat Nagar. In some cases such as Chandni Chowk, the traders have also resisted the surveys citing that the areas are already declared as no-hawking zones.

“Some areas were declared to be no-squatting zones by the courts in 2000 while the street vendors act came in 2014. Vendors who came after 2000 should not be permitted,” said Sanjay Bhargava from Chandni Chowk traders’ body.

Jogi Ram Jain, standing committee chairman of the North Delhi civic body said that he was not aware of survey findings, and that he will look into the matter.