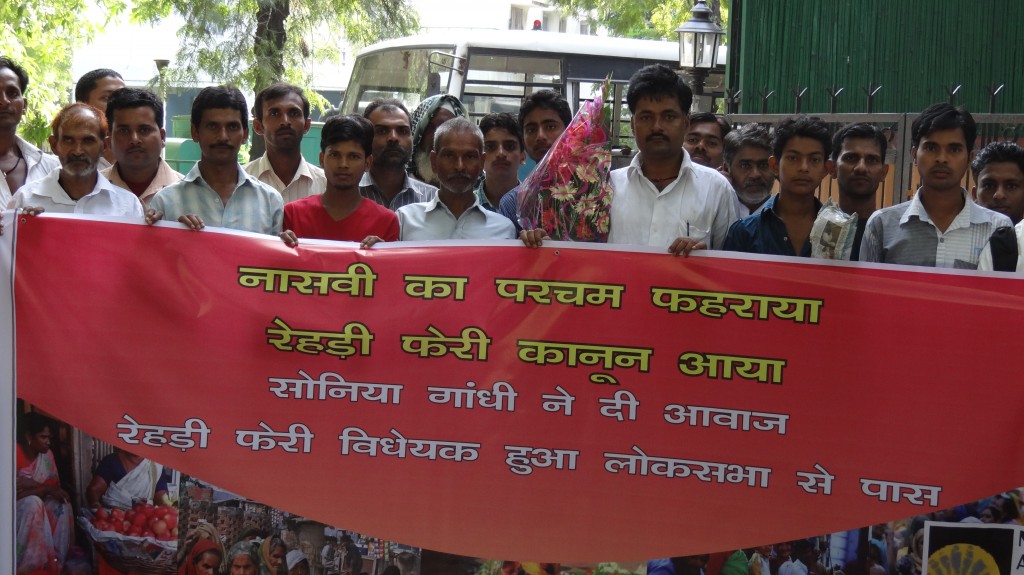 Years long struggle of street vendors for secured and dignified livelihood and sustained engagement of the National Association of Street Vendors of India (NASVI) with the government finally yielded result on 6 September, 2013 with the Lok Sabha passing the much awaited Street Vendors (Protection of Livelihood and Regulation of Street Vending) Bill. The Bill has several provisions to protect livelihood, social security and human rights of those more than ten million urban street vendors who have been facing several barriers and onslaughts of the municipal bodies and the police across cities and towns of India.  NASVI has hailed the passage of the bill and called upon the street vendor organizations across India to take out victory processions in cities and towns.

Hailing the passage of the bill and congratulating the UPA chairperson Sonia Gandhi and all three union ministers who have had chaired the Ministry of Housing and Urban Poverty Alleviation in last three years including Ajay Maken, Girija Vyas and Kumari Selja, NASVI national coordinator Arbind Singh has said, “We really struggled a lot. We are happy that the Lok Sabha has passed it. We trust the bill will get passed in the Rajya Sabha also. It would be the first forward looking progressive central legislation any country has ever legislated in favour of street vendors”.

He described inclusive and effective central legislation as a critical social-political need of urbanizing India and said, “Once enacted, the legislation would go a long way changing the faces of Indian cities and towns. The cities are changing rapidly and several opportunities are coming up.  Once legalized and protected, the street vendors also would be able to avail those opportunities as they too have equal stakes in missions of development and democracy.”

NASVI coordinator said, “The enactment of law would trigger organizing among street vendors and a major task would be to ensure the proper implementation of law”.

The Bill greatly empowers the Town Vending Committee (TVC) and gives it power to decide ultimately on almost all issues of determining the vending zones. The Bill does also have strong grievance redressal mechanisms. The most salient feature of the bill is its overriding effect over all state and municipal laws as well as police acts.

The Bill states that at least 2.5 per cent of a city’s population would be eligible for vending licences and it would be mandatory to form Town and Zonal Vending Committee in each and every city. Such committees would have 40 percent representation of elected representatives of vendor organizations, 10 per cent of NGOs and rest of town planners, administrators, police and elected peoples representatives.

The root of the proposed legislation lies in the street vendors’ agitation, 2010  Supreme Court verdict and the diligence of the National Advisory Committee (NAC) which felt and recognized the merits of NASVI advocacy for central law in favour of street vendors.

“In last three years, we spearheaded series of campaigns and engaged with the National Advisory Council (NAC) and the Ministry of Housing and Urban Poverty Alleviation (MHUPA). The NAC deliberated on the issue in its several meetings. In May, 2011, it recommended for a central law to the Government of India. The MHUPA sought the opinion of the Ministry of Law and as the latter had some doubts, it urged the Attorney General of India for the final opinion. The Attorney General gave his opinion in favour of central law for street vendors in November, 2011.  Then the process of drafting the Bill started and Draft Bill got prepared. NASVI sent several inputs to the Ministry of Housing and Urban Poverty Alleviation during the course of drafting the Bill”, a dissemination note of NASVI states.

“Initially the Street Vendors Bill was tabled in the Lok Sabha by the then Union Minister of Housing and Urban Poverty Alleviation Kumari Selja on 6 September, 2012. The Bill had many key provisions enabling vendors to get access to rights and entitlements, but also had several shortcomings.  When the street vendors came to know about the shortcomings, they raised their voices and points of amendment to the Bill. Subsequently, the Bill was sent to the Standing Committee of the Parliament”, the note adds.

“In November and December, 2012, NASVI presented its concerns and points of amendments to the Bill before the Standing Committee.  On 13 March, 2013, a huge Street Vendors Parliament took place in Delhi. On the day, the Parliamentary Standing Committee on Urban Development tabled its report on the floor of the houses. On 1 May, 2013, the union cabinet approved the revamped Street Vendors Bill. The Bill had to get passed in the budget session itself, but the political logjam had compelled the government to adjourn the session before time”, the note recollects.

“This year, on 8 July, NASVI delegation had called on Girija Vyas, the Union Minister of Housing and Urban Poverty Alleviation. In August, the street vendors across states sent thousands of postcards and letters to the Congress president and the UPA chairperson Sonia Gandhi urging her to ensure the passage of the bill”, NASVI note says.

Waves of cheer across several cities

The passage of the Bill has provided sufficient reasons to the street vendors to cheer and celebrate across several cities.  On 7 September, hundreds of street vendors in national capital Delhi  marched to the residences of union ministers Girija Vyas and Kumari Selja and former union minister Ajay Maken, who had played a very dynamic role in pushing forward the street vendors bill, with large baskets of fruits, flowers and vegetables.  The jubilant vendors rented the sky with slogans like ‘NASVI ka Parcham Fahraya, Rehri Feri Kanoon Aaya’ [NASVI flag hoists at the top with Street Vendors’ Livelihood Protection Legislation].

Several newspapers and TV channels have covered the legislative development and NASVI viewpoints.

Here are some news links: