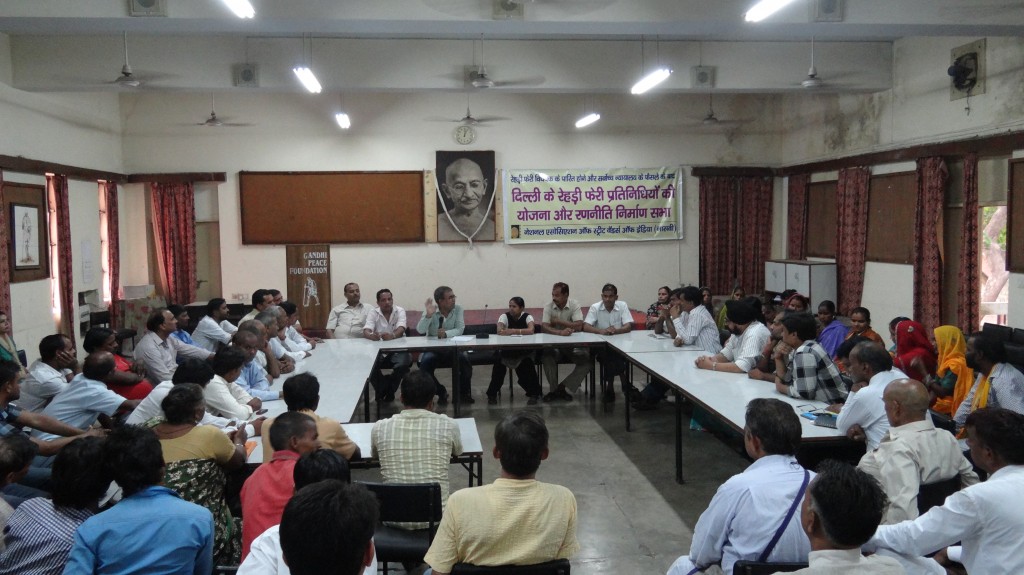 NASVI to launch tirade against harassment and extortion of money by police and municipal agencies from 20 January, seek AAP support

New Delhi, 7 January:  National Association of Street Vendors of India (NASVI) has announced to launch a nationwide campaign from 20 January against delay in the passage of Street Vendors (Protection of Livelihood and Regulation of Street Vending) Bill by the Rajya Sabha, non-compliance of the Supreme Court order given in favour of street vendors and continuing harassment and extortion of money by the police and the municipal agencies. The street vendors’ body has sought support of the Aam Aadmi Party (AAP) in the campaign. As a part of the campaign, a huge ‘Street Vendors Parliament’ would be organized in Delhi on 31 January. NASVI has invited Delhi chief minister Arvind Kejriwal to address this public action.

Meanwhile NASVI has faxed and sent registered posts to Delhi urban development and local bodies minister Manish Sisodia, director of local bodies, chairperson of New Delhi Municipal Council (NDMC) and all three commissioners of municipal corporations in Delhi seeking time to meet them to discuss the issues and plight of street vendors in the national capital. In the letters, NASVI has expressed strong resentment over the non-compliance of 9 September Supreme Court order which had mandated formation of Town Vending Committee (TVC) within two months and registration and settlement of all vendors within four months. “ Post- apex court order, many municipal bodies in other cities, such as Mumbai, Hyderabad and Lucknow, have complied with the order and formed the TVC, but municipal bodies in Delhi are showing scant regard to the Supreme Court order”, the letters state.

On Tuesday, street vendor leaders of seventy markets of Delhi joined together in a ‘Campaign Planning Meeting’ held at Gandhi Peace Foundation and assessed the situation prevailing in their markets, particularly the high handedness of the beat constables and the municipal inspectors. The vendor leaders of Okhla, Lado Sarai, Katwaria Sarai, Vasant Kunj, Sarojini Nagar market, India Gate, Janpath, Karol Bagh, Tilak Nagar, Uttam Nagar, Rohini, Narela and Madhu Vihar, Preet Vihar and Shahdara shared their agonies and bemoaned the attitudes of authorities. They put forth their action points and finally a comprehensive action plan was chalked out.

They pledged not to pay a single penny to any policeman or municipal person as bribe. They said in one voice, “Hum paisa naheen khoon dete hain” ( We give blood, not money). They also decided to put up banners and stickers in their markets reading “Kejriwal Jee Hamen Vending License Dilwayo” (Mr. Kejriwal, ensure that we get vending license).

Addressing the meeting NASVI national coordinator Arbind Singh called upon the street vendor leaders to organize the vendors in large numbers in their markets and put stiff resistance to thugs and muggers of municipal bodies and police. Seeking support of the AAP to the street vendors’ campaign, Mr. Singh urged the new government of Delhi to accord a new deal to the street vendors who have been facing several barriers and onslaughts of the municipal bodies and the police over the years. “The new dispensation should fulfill its election manifesto commitment that it would provide vending license/certificate and permanent spaces to the street vendors and put a stop on the loot and repression of police and municipal agencies”, he said.  He also invited Delhi chief Minister Arvind Kejriwal to address the Street Vendors Parliament in Delhi on 31 January.