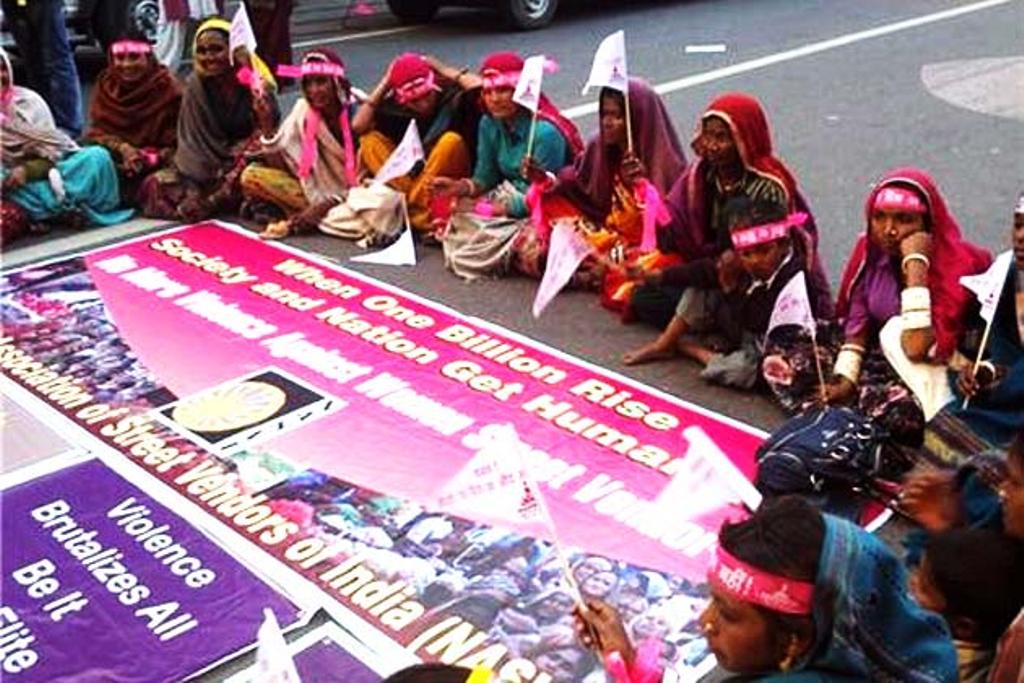 In every case of sexual violence on streets, police machinery gets exposed

Contingents of women street vendors under the banner of National Association of Street Vendors of India (NASVI) on 14 February joined the ‘One Billion Rising’ campaign in Delhi and several other cities in protest against growing violence on women.  The women vendors voiced their protest against increasing harassment, torture and violence of police and municipal authorities.

In the national capital, women street vendors along with NASVI functionaries joined the public action at Parliament Street with graffiti, banners and placards reading “Violence brutalizes all, Be it the Elites, the Middle Class or the Working Poor/Stop It Now” and “In Every Case of Sexual Violence on Street, Police Machinery gets Exposed” and “Mahilaon ki Maan Maryada par badhta hamla, Loktantra ka yah kaisa Chehra.  The women vendors put their graffiti and banners flat on the road, encircled the pathways and vent their ire against discrimination, humiliation and violence through singing the Rajasthani folk songs.

Leading a group of women street vendors of Sarojini Nagar market and India Gate, an assertive women street vendor Hukum Bai shared with the crowd and the media persons how women street vendors had been treated by the police and municipal inspectors, how they were abused and how they were taxed illegally. She shared her own bitter memories of dealing with khaki clad marauders and local stalkers. She said that when she along with other women street vendors pledged to get organized and resist the atrocities, things changed and the women vendors started coming on the streets reclaiming their rights to secured and dignified livelihood and human dignity.

Another women street vendor Man Bai, who vends around India Gate, said, “Violence against women is all- pervasive. It transcends class and caste. It affects all. However, it is ironic that the violence taking place against middle class women and girls sparks off protests and makes splash in media, but when a working poor woman like street vendor or domestic worker gets harassed, tortured and physically abused, silence descends”.

Accompanying the women vendors, NASVI representative Anuradha Singh said, “The Justice J.S. Verma Committee Report, which was constituted by the Government of India on 23 December, 2012 in the wake of nationwide outrage and public protests against the brutal gang rape of a girl in Delhi on 16 December, also has pointed out that the street vendors make city streets safe and therefore they should be encouraged by the authorities. The Report recommended under its Recommendation No. 17: Street vending should be encouraged to make the bus stops and footpaths safe for communities and pedestrians, in addition to providing street food for the common people. We hail the recommendation and demand of the government to immediately enact central legislation to protect the livelihood, dignity and human rights of street vendors and bring in measures for municipal and police reforms.”