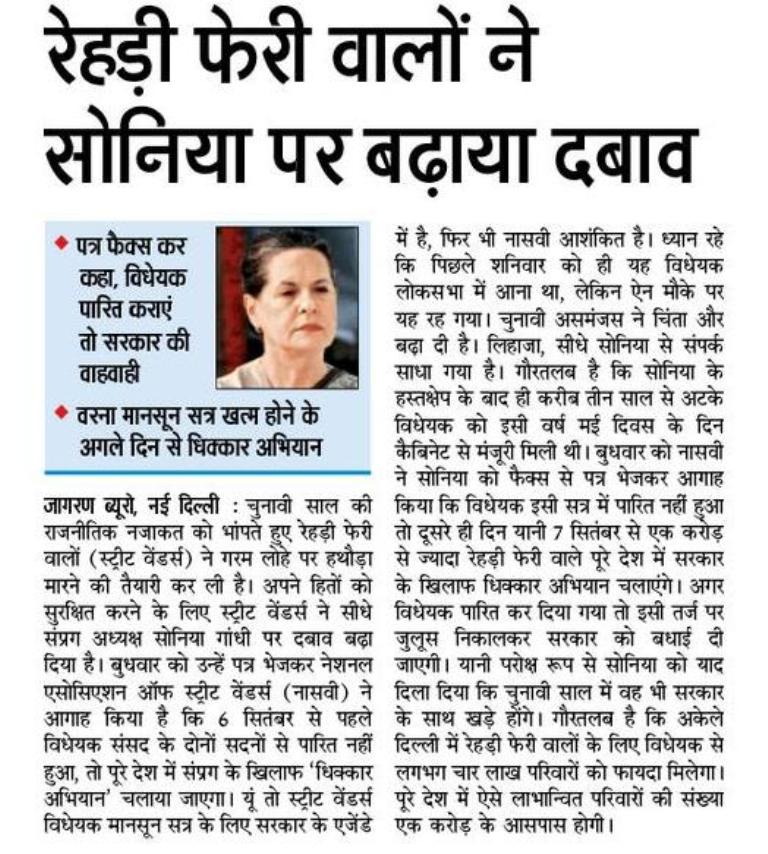 At that point of time the budget session of Indian parliament was going on, The Bill had to be passed in that session, but it could not due to political logjam between the ruling and the opposition parties. That session had ended abruptly, but the street vendors realized that more momentum was needed for pursuing it further.

This month the monsoon session of Indian parliament began and thus also started another round of campaign for the passage of the street vendors’ bill. Thousands of vendors and hawkers came on to the streets in several cities and towns with written postcards in their hands. They marched in groups to the respective post boxes. The postcards were addressed to Ms. Sonia Gandhi, the chairperson of the United Progressive Alliance, the ruling coalition of India. The postcards simply read, ‘Liberate street vendors from the loot and terror of municipal bodies and police/ Ensure passage of Street Vendors’ Bill in current session’.  This unique postcard campaign started on 5 August and concluded on 15 August. During the campaign, more than one lakh postcards were sent to UPA chairperson Sonia Gandhi.

Meanwhile a NASVI delegation also called on the Union Minister of Housing and Urban Poverty Alleviation Girija Vyas and urged her to take initiative to ensure the passage of the bill. She assured the delegation.  NASVI learnt that the street vendors’ bill had been listed on the business schedule of the houses of parliament.

On 28 August, NASVI sent a letter to the Prime Minister and the UPA chairperson demanding their personal intervention to ensure the passage of the bill.

The letter signed by NASVI national coordinator Arbind Singh states, “Besides campaigning on the streets, NASVI has time and again engaged with the Government of India, particularly the Union Ministry of Housing and Urban Poverty Alleviation and the National Advisory Council on the issues related to central legislation in favour of street vendors. We feel happy that our sustained efforts and engagement with the government have yielded good results and the Street Vendors (Protection of Livelihood and Regulation of Street Vending) Bill is ready in its final form. The union cabinet had already approved it in May, 2013”.

It adds, “During last parliamentary session, the street vendors had hoped that the Bill would get passed, but it could not. Last month we also called on the Minister of Housing and Urban Poverty Alleviation Dr. Girija Vyas and urged her to take initiatives to ensure that the Bill gets passed in the monsoon session.  This month a large number of street vendors also contacted the UPA chairperson through postcards for taking personal intervention to ensure passage of the Bill for their livelihood protection. The street vendors do believe that the   cities are changing rapidly and several opportunities are coming up.  Once legalized and protected though an inclusive central legislation, the street vendors also would be able to contribute more to city economies and avail the opportunities of fast urbanization”.

Meanwhile it is not just meeting the minister of Housing and Urban Poverty Alleviation and petitioning the UPA chairperson, NASVI also has planned to mount pressure in a campaign based mode. “If the bill is passed, the street vendors across cities and towns would be commending the government through victory processions and if not, ‘Dhikkar Abhiyan’ [Damn Campaign] would start from 7 September”, NASVI has announced.  The parliamentary session is going to end on 6 September, 2013.