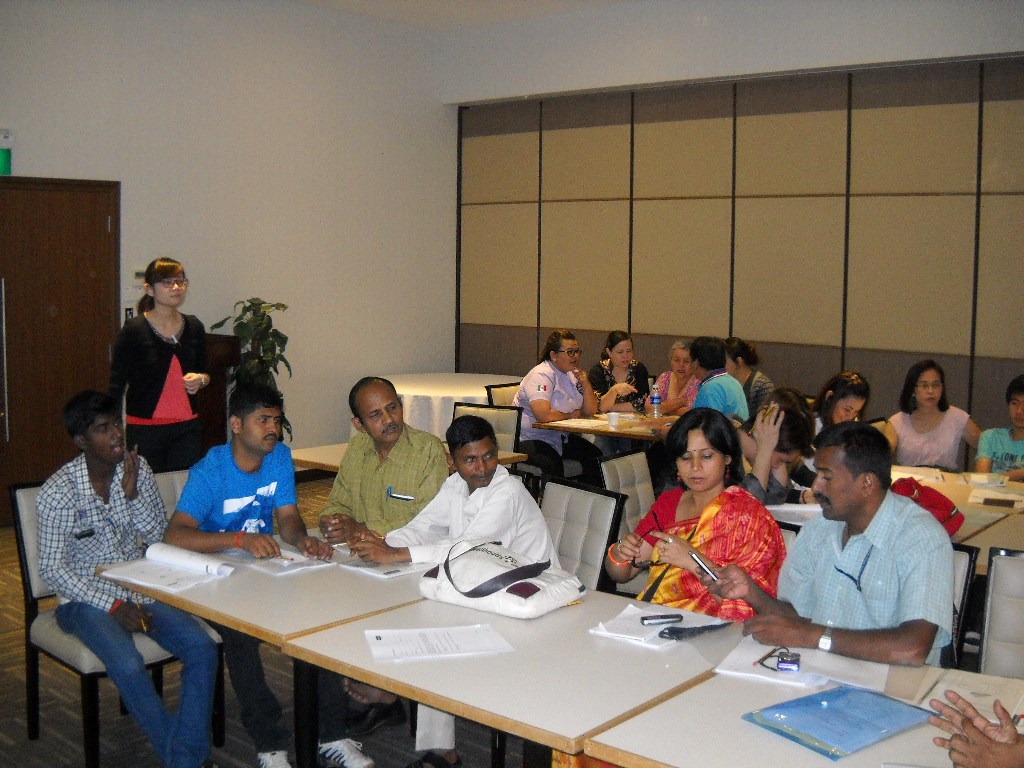 “We are all set to make thunder here during the ten day long international street food carnival.  The ice breaking is over. The team is upbeat and forward looking”, said Sangeeta Singh, street food programs manager of the National Association of Street Vendors of India (NASVI) who is leading the Indian team in Singapore.

The WSFC  would have 40 street food stalls of 32 countries. The maximum stalls would be from India.

Alongside the ten day long WSFC, the World Street Food Dialogue would also take place in Singapore on 3-4 June. The dialogue would have presence of more than 50 key speakers including NASVI national coordinator Arbind Singh. Mr. Singh would be speaking on ‘India’s Quest to Legitimize Five Million Street Food Vendors, Future Potentials & Vision of NASVI’. The speakers would share, discuss and present on the ways to preserve, professionalize and create new opportunities for street food vendors across countries.

In the first session, the  facilitator and trainers made a power point presentation on Microorganisms, Food borne illness and Food contamination.  Initially the participating vendors got nervious hearing words like Bacillus cerus,salomonella and vibro parahaemolyticus.  Gulab singh said “pahle thoda padhne me dhyan diya hota to aaj aur maja aata”. When it was translated, all laughed and made Gulab Singh relaxed. Holding pencils and chart papers, the vendors took part in the training in a very serious manner  as they had to pass the test for fetching certificates.

All the topics were explained nicely by the instructor. The funny moments also came.  Once  when  Mr. Narayan swami of Dharwar  failed to answer a paticular question, he  told the trainer, “ Why do you speak so meekly, I do not hear the question. Without hearing loud, how can I answer the question?”

Most serious was the youngest member of the team ,Vijay chaudhary from Patna. He could understand English words.  he read the guidebook and answered most of the questions.

The issues discussed in the training include importance of good personal hygiene, medical legislations and guidelines. water management, preparation of food,  safe servicing and safe storage. The most interesting session was on HACCP(Hazard Analysis and Critical Control Point).  Not a single participant was aware of  the issue.  A short quiz was also conducted to check the understanding of the vendors.  In the third session, the participants had to go for written test which was multiple choice test.Before test,  they were given 60 minutes to revise. Gulab singh, Narayan swami and Akbar were nervous . Tthey started having stomach cramps and sweating. The instuctor cooled them.  It was an awesome scene. The street food masters of holding knife, scoop and daddle puzzled out the question papers with pencils in hands.

Sangeeta Singh translated the questions and their options and the vendors circled the right options in their answer sheets. It contained 48 questions to be done in 55 minutes.  The Indian team finished it in 50 minutes.All of them did well except Narayanswami who made more than 10 mistakes.To passs the test,  it was compulsory to have 100 marks. An oral test was again taken and in that all the vendors passed.

The final was the practical test in the laboratory.  To test the hygiene understanding of the participants,  they were asked to make butter sandwich. They were observed closely by the trainers. All did well in the practical test.