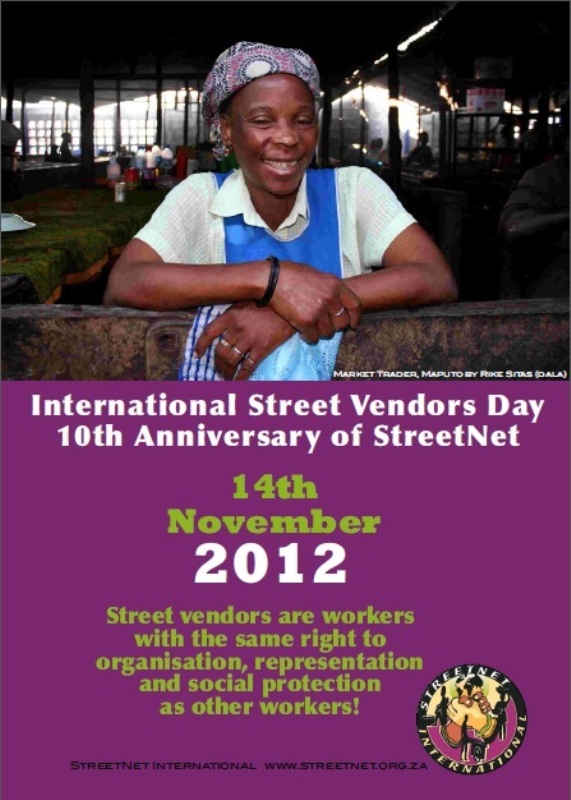 On 14th November 2012, StreetNet affiliates and partners around the globe will be celebrating the 1st International Street Vendors Day. This year it will coincide with the 10th Anniversary of StreetNet.

The International Street Vendors Day will be celebrated on an annual basis from now on.  It will be a day to celebrate the contribution of street vendors to national development and to call attention to issues of particular concern.

This year the theme identified by the International Council is “Street vendors are workers with the same right to organisation, representation and social protection as other workers!”

Oscar Silva, President of StreetNet, from SIVARA, Argentina, explains: “ I’m really proud that StreetNet is celebrating the first  and its 10th Anniversary during my Presidency.  StreetNet has dramatically increased its membership in these ten years to become a truly world-wide organisation.  It is recognised as the voice of street vendors and respected for its policies, programmes and campaigns. Long live StreetNet!”

“The International Street Vendors Day was first discussed at the StreetNet Congress in 2010.  We see it as an opportunity to bring street vendors together across the globe and realize that we have common challenges and needs. At national level, the affiliates are planning events, marches and meetings to mark the day.  We are busy preparing to make it a very special day for our sector!”  said Clarisse Gnahoui, member of the International Council from USYNVEDPID, Benin.

“We are now in preparations for the International Street Vendors’ Day which will include some events such as advertisement in the media, marches, and an exhibition. We are also preparing a small booklet which outlines the views and comments of the vendors. We are anticipating that at our meeting, there will be representatives from the Government and ILO” Majura Jones, TUICO, Tanzania

Arbind Singh, National Coordinator of the National Association of Street Vendors of India (NASVI), which is also the Asia focal point of Street Net, said, “The upcoming International Street Vendors Day will be a red letter day and a source of inspirational energy for the organizations working for livelihood democracy and participative democracy of millions of street vendors in numerous countries. The day will  also assist the movement for national legislations in different countries. We are proud that the day comes when the struggle of street vendors of India under the banner of NASVI has yielded positive results and the Indian Government is all set to enact a national legislation to protect livelihood and social security rights of street vendors.  Seize the Opportunities, March Ahead! Long Live StreetNet! ”