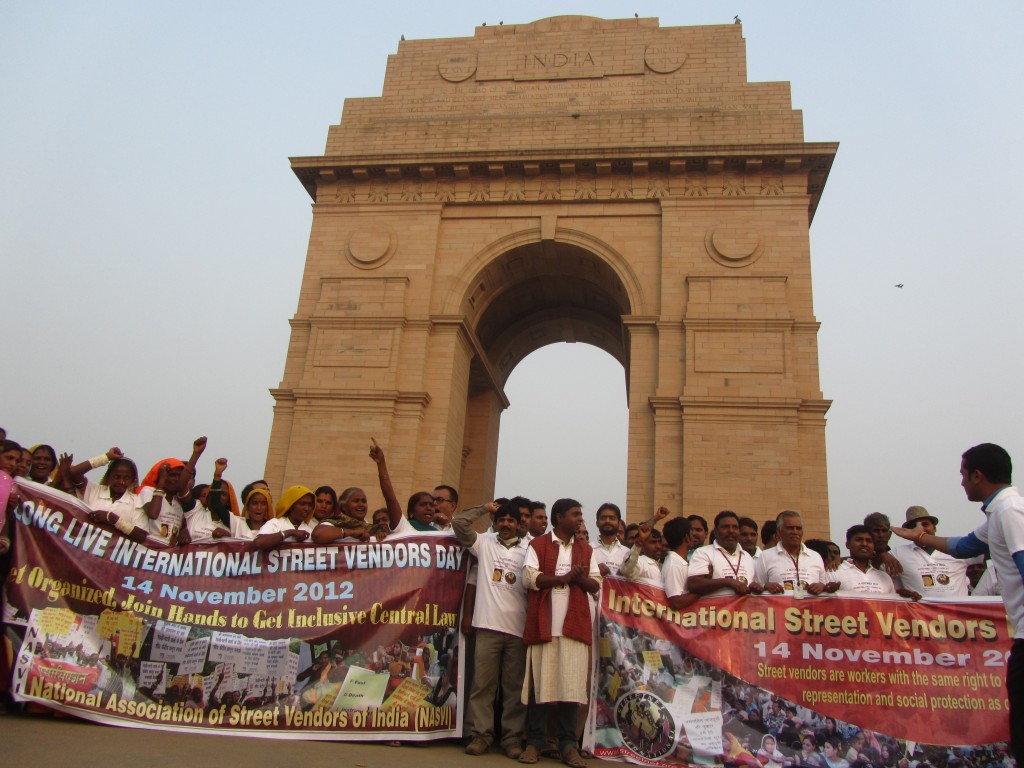 NASVI is the Asia focal point of the StreetNet International. The international solidarity action held on Wednesday also marked the tenth anniversary of the inception of StreetNet.

The street vendors in Delhi and other centers held meetings, rallies and demonstrations and formed human chains celebrating the contribution of street vendors to national economies as well as the society at large. The theme of the celebration was Accelerate Organizing and Fight for Representative Voice & Livelihood and Social Security Rights.

In Delhi, the day witnessed street vendors wearing slogans and monogram dotted colorful t-shirts in different markets and forming human chain at historic India Gate with slogan ‘Get Organized, Fight for Inclusive Central Law for Livelihood and Social Security Rights Protection’. The celebration action was a source of huge attraction for thousands of visitors who throng India Gate daily to delight and enjoy.  The women and the youth vendors joining the human chain with their own trolleys and carts  provided the solidarity action an amazing picture.

Addressing the vendors at the India Gate, NASVI national coordinator Arbind Singh said that the street vendors are workers with the same right to organization, representation and social protection as other workers and they do need inclusive central legislation, responsive governance and adequate social protection. “We are proud that the day comes when the struggle of street vendors of India under the banner of NASVI has yielded positive results and the Indian Government has committed itself to bring in an inclusive national legislation”, NASVI national coordinator said.

He said, “ it is necessary to realize that the street vendors across globe have common challenges and needs and these can be met effectively only through large scale organizing, wider networking and high pitched advocacy with urban bodies, national governments and the United Nations bodies as well as institutions like International Labour Organization”.  He announced that NASVI had been in close touch with the street vendor organizations active in several Asian countries and it would accelerate the process of forming an Asia level Alliance of Street Vendors to spearhead the street vendor movement in the continent.

He described the International Street Vendors Day as a day providing inspirational energy to the organizations working for livelihood democracy and participative democracy of millions of street vendors in numerous countries. He hoped that the day would also assist the movement for national legislations in different countries.