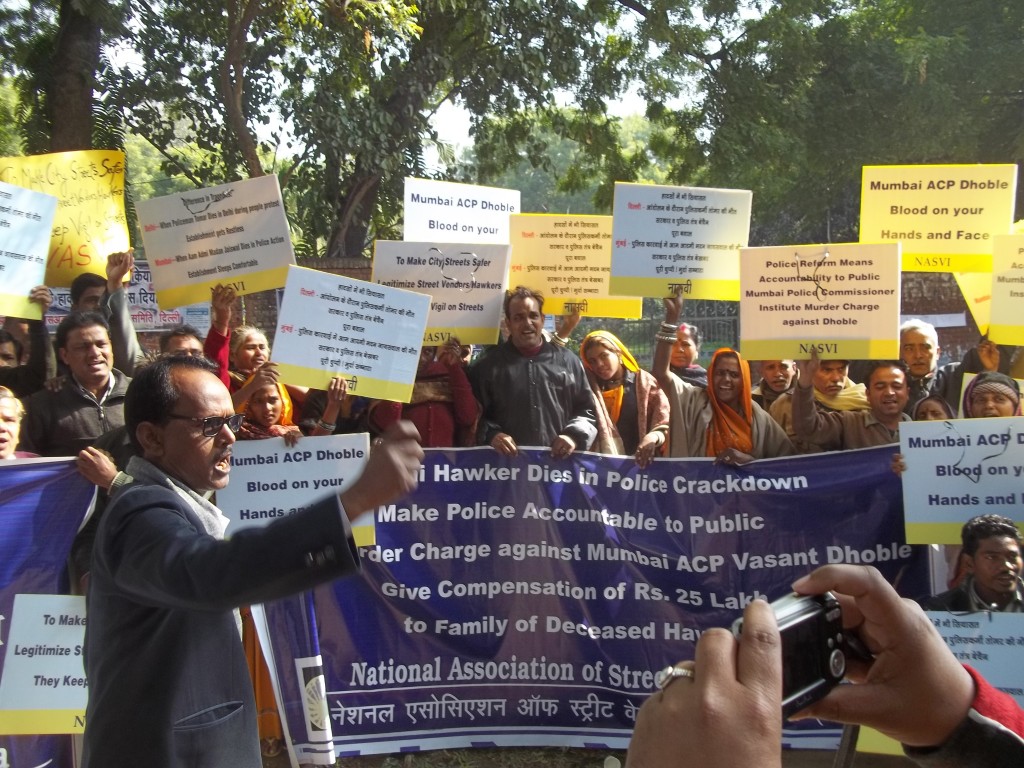 Agitators demand compensation of Rs. 25 lakh from Maharashtra government to the family of dead street vendor

The heat of Mumbai hawkers’ protests reached national capital on Sunday with street vendors forming human chain at Parliament Street in Delhi demanding institution of murder charge against the infamous Mumbai Assistant Commissioner of Police (ACP) Vasant Dhoble whose action led to the death of a 45 years old hawker Madan Jaiswal in Mumbai on 11 January. The agitating vendors also demanded from the Maharashtra government to immediately provide compensation of Rs. 25 lakh to the family of the deceased hawker and threatened that if their demands were not met, the hawkers and vendors from Maharashtra and other states would assemble in Delhi to march to the Home Ministry.

Joining the human chain organized by the National Association of Street Vendors of India (NASVI) which launched a nationwide anti-police terror campaign on Sunday, the street vendors of Delhi made a shrill cry to make police accountable to the public and said that the vendors and hawkers make city streets safer as they keep vigil on the streets.  They said, “We are the eyes and the ears of city. We make markets and public places safe and secure. If we are not at railway and bus station premises, the areas would be prone to loot and crimes. We serve people, help local economy grow and make city inclusive and dynamic, but the authorities refuse to legalize us and give us the space and opportunities to earn a descent living.   The police and municipal officials exploit us financially, but when we refuse to entertain them, we face threats, harassment and forced eviction.”

Describing the transfer of Mumbai ACP as  an ‘attempt to shield him and exercise to hush up the incident of police crackdown triggered death of a street vendor’, Mr. Singh  said, “ Just after the shocking incident in Mumbai on 11 January, we emailed and faxed protest letters to the Union Home Minister, Union Home Secretary, Union Minister of Housing and Urban Poverty Alleviation, Maharashtra Chief Minister, Maharashtra Home Minister, Maharashtra DGP and Mumbai Police Chief as well as the National Human Rights Commission and demanded that the charges of murder  be lodged against the infamous ACP, he must be sacked and the state government  immediately provide compensation of Rs. 25 lakh to the family of the dead street vendor Madan Jaiswal. Now, we call upon the street vendors’ organizations of all states to reiterate the demands through faxing protest and demand letters to ministers and authorities in Delhi.”

NASVI chief said that the death of fruit vendor was not a natural death as the police and the medical authorities tried to rumour, rather it was  a death due to the  shock and awe created by the Dhoble brigade. He said, “The establishment treats tragedies according to its convenience. When a constable Subhash Tomar dies in Delhi during people protest, the police establishment gets outraged, but when a poor vendor Madan Jaiswal dies in Mumbai during police action, the agencies and the authorities do not feel ashamed.”

He said that though there is a National Policy for Street Vendors and the central government is in the process of bringing in a central law to protect the livelihood and social security rights of street vendors as mandated by the Supreme Court of India, street vendor like Madan Jaiswal is sacrificing his life fighting against the terror of the police and loot of municipal body.

Meanwhile, according to a NASVI release, the anti- police terror campaign which started on Sunday would continue till 26 January in the first phase.  NASVI affiliate Azad Hawkers Union would organize a huge vendors/hawkers rally at Azad Maidan in Mumbai on 24 January. NASVI has called upon the street vendors’ representatives across the country to join the Mumbai Rally against reign of terror unleashed by the police and the municipal authorities against street vendors. The street vendors’ organizations in  northern  and southern states would organize week long protests and would send  protest and demand letters to the Union Home Minister, Union Home Secretary, Union Minister of Housing and Urban Poverty Alleviation, Maharashtra Chief Minister, Maharashtra Home Minister, Maharashtra Director General of Police, Mumbai Police Chief as well as the National Human Rights Commission.