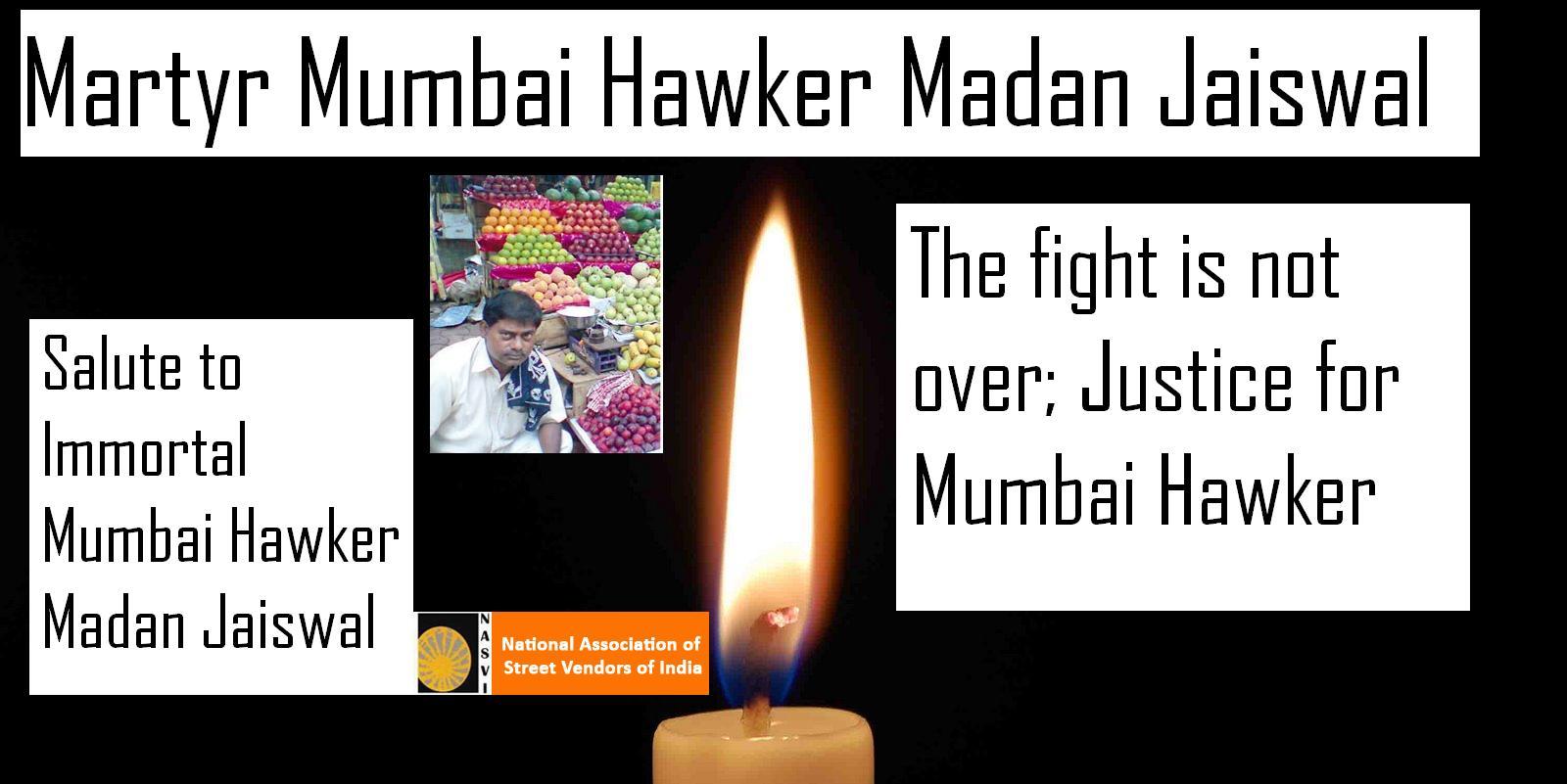 Transfer of Mumbai ACP Vasant Dhoble is Hush up exercise

Institute murder charge against infamous ACP and give compensation of Rs. 25 lakh to the family of dead street vendor, NASVI demands

Street vendors to form human chain in Delhi on 20 January

Huge Rally at Azad Maidan in Mumbai on 24 January

Protesting Mumbai street vendor death in a police crackdown led by infamous Mumbai Assistant Commissioner of Police (ACP) Vasant Dhoble on 11 January and making strong objection to the irresponsible regional chauvinist utterances of Maharashtra NavNirman Sena (MNS) leader Raj Thackeray in favour of the Mumbai ACP, the National Association of Street Vendors of India (NASVI) would launch an anti-police terror campaign from 20 January to 26 January in different parts of the country.

The campaign would start in the national capital on 20 January with street vendors forming human chain at Parliament Street in Delhi. NASVI affiliate Azad Hawkers Union would organize a huge vendors/hawkers rally at Azad Maidan in Mumbai on 24 January. NASVI has called upon the street vendors’ representatives across the country to join the Mumbai Rally against reign of terror unleashed by the police and the municipal authorities against street vendors.

During the campaign, street vendors in several cities and towns would organize protest demonstrations and rallies demanding institution of murder charge against the Mumbai ACP, his sacking  and immediate compensation of Rs. 25 lakh  from the Maharashtra Government to the family of the dead street vendor Madan Jaiswal. The street vendors’ organizations in  northern  and southern states would organize week long protests and would send  protest and demand letters to the Union Home Minister, Union Home Secretary, Union Minister of Housing and Urban Poverty Alleviation, Maharashtra Chief Minister, Maharashtra Home Minister, Maharashtra Director General of Police, Mumbai Police Chief as well as the National Human Rights Commission.

Announcing  the nationwide  protest action against continuing police terror against street vendors, NASVI national coordinator Arbind Singh on Thursday termed the transfer of Mumbai ACP  Vasant Dhoble as an ‘attempt to shield him and exercise to hush up the incident of police crackdown triggered death of a street vendor’.

He said, “ Just after the shocking incident in Mumbai on 11 January, we emailed and faxed protest letters to the Union Home Minister, Union Home Secretary, Union Minister of Housing and Urban Poverty Alleviation, Maharashtra Chief Minister, Maharashtra Home Minister, Maharashtra DGP and Mumbai Police Chief as well as the National Human Rights Commission and demanded that the charges of murder  be lodged against the infamous ACP, he must be sacked and the state government  immediately provide compensation of Rs. 25 lakh to the family of the dead street vendor Madan Jaiswal. Now, we call upon the street vendors’ organizations of all states to reiterate the demands through faxing protest and demand letters to ministers and authorities in Delhi.”

Mr. Singh said that the death of fruit vendor was not a natural death as the police and the medical authorities tried to rumour, rather it was police crackdown triggered killing of a working poor who was earning his livelihood at the site for last twenty years.

He found it very ironic that though there is a National Policy for Street Vendors and the Central Government is in the process of bringing in a central law to protect the livelihood and social security rights of street vendors as mandated by the Supreme Court of India, street vendor like Madan Jaiswal is sacrificing his life fighting against the terror of the police and loot of municipal body.