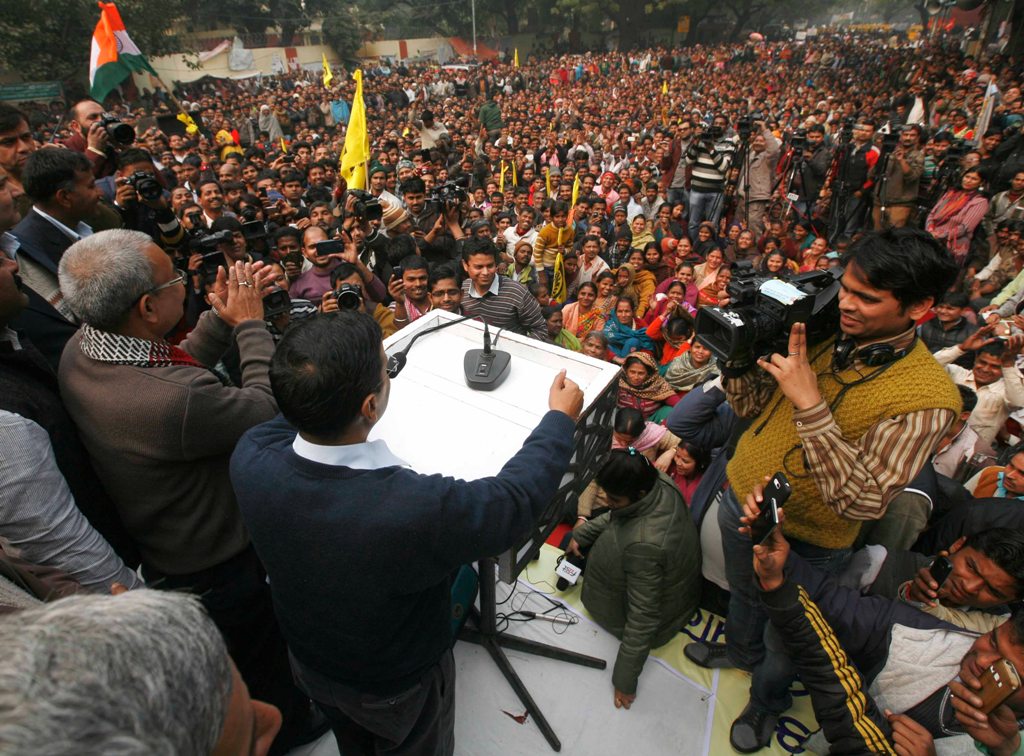 No street vendor would be evicted in Delhi and extortionist police and municipal officials would be put in jail, Delhi CM announces

“I would write to the Police Commissioner and Commissioners and Mayors of Municipal Bodies to ensure compliance of Supreme Court order which mandates protection of livelihood of street vendors”, Mr. Kejriwal says

Mr. Kejriwal calls upon street vendors to record demand of extortion in their mobile

More than ten thousands street vendors on Friday found sufficient reasons to cheer when the Aam Aadmi Party (AAP) chief and Delhi chief minister Arvind Kejriwal came out in full support of street vendors’ rights movement.  Mr. Kejriwal thundered, “ no street vendor would be evicted in Delhi and the extortionist police personnel and municipal officials would be booked and put in jail”. He called upon the street vendors to record demands of extortion in their mobile. The Delhi Chief Minister also announced that he would write to the Delhi Police Commissioner and Commissioners and Mayors of municipal bodies to ensure strict compliance of the Supreme Court order which mandates protection of livelihood of street vendors. Mr. Kejriwal also supported the vendors’ rights campaign for comprehensive central legislation and demanded of the center to pass the Street Vendors (Protection of Livelihood and Regulation of Street Vending) Bill in the Rajya Sabha.

Mr. Kejriwal was addressing a huge Street Vendors Parliament at Jantar Mantar in Delhi which was organized by the National Association of Street Vendors of India (NASVI).

The unique political action of street vendors demanded passage of the Street Vendors (Protection of Livelihood and Regulation of Street Vending) Bill by the Rajya Sabha in the coming February session of parliament, stop on rampant extortion of money and terror of police and municipal bodies and creation of vending zone in each ward of Delhi and other cities.

Addressing the vendors, another senior leader of AAP Yogendra Yadav said, “The people owe so much to street vendors. We must express gratitude to them through providing them space, voice and dignity”.

The former union minister and senior Congress leader Ajay Maken who had played a very dynamic role in pushing forward the street vendors’ legislation had also to join the Street Vendors Parliament, but he could not.

Mr. Maken said later, “The UPA Government is committed to accord a new deal to the street vendors. We have always been responsive to the issues and concerns of street vendors. We worked hard, took the support of organization like NASVI and ensured the passage of the Street Vendors (Protection of Livelihood and Regulation of Street Vending) Bill in the Lok Sabha. Now, we would ensure that it is passed by the Rajya Sabha also. The urban India needs such legislative developments in favour of informal workers.”

“There is a pressing need to regenerate the entire street vending sector. This sector has huge potentials to contribute. We have to tap these potentials for the benefit of society and economy. Many Asian countries have shown it. We should not lag behind. We need to protect and promote entrepreneurship of street vendors. They need to get capacity development and enterprise building support.  We have made adequate provisions in the National Urban Livelihood Mission for the upliftment of street vendors”, Mr. Maken added.

Earlier in the day, addressing the street vendors NASVI national coordinator Arbind Singh said, “The sustained struggle of street vendors across states led to legislative development in the Lok Sabha which passed the much awaited Street Vendors (Protection of Livelihood and Regulation of Street Vending) Bill last year and the subsequent order of the Supreme Court of India on 9 September, 2013. However, the bill is still pending in the Rajya Sabha. It had to get passed in the Rajya Sabha in the last session, but it could not. The absence of comprehensive legislation protecting the livelihood of street vendors and the non-accountability of municipal and police administration has made street vendors vulnerable to the attacks of extortionist police and municipal officials.”

He said, “We are hurt and anguished to say that despite the policies and the court orders in favour of street vendors, the street vendors in the national capital have been facing menace of extortion by police and municipal officials across markets. There is hardly any area in the city where beat constables and municipal inspectors do not collect money from the vendors. They create terror, illegally collect hafta and victimize and evict vendors in cases of refusal. We have time and again raised these issues and sought time from the Delhi Police Commissioner to meet him on the issues. But, he refuses to meet us”.

Expressing resentment over the issue of non-compliance of Supreme Court order, Mr. Singh said, “On 9 September, 2013, the Supreme Court directed all state governments and the UT administrators to ensure formation of Town Vending Committee (TVC) within two months and registration of all street vendors within four months. The apex court said that the direction would be binding till the enactment of the central law to protect the livelihood of street vendors. The key direction no. 15 of the Supreme Court order read, ‘All the existing street vendors / hawkers operating across the country shall be allowed to operate till the exercise of registration and creation of vending / hawking zones is completed. Once that exercise is completed, they shall be entitled to operate only in accordance with the orders/directions of the concerned Town Vending Committee’. However, many municipal bodies and the police are openly violating the order of the Supreme Court and forcibly evicting street vendors from their livelihood sites.”

Several street vendors narrated how they had been harassed and forced to shell out money to the police and the municipal inspectors.

The Street Vendors Parliament passed resolutions demanding passage of the street vendors bill in the coming February session of parliament, immediate registering of FIR against police and municipal official after written complaint of street vendor, immediate issuing of vending license/certificate to street vendors, creation of vending zone in each ward of Delhi and other cities and registration of all street vendors under the Rashtriya Swasthya Bima Yojna (RSBY).

Meanwhile, NASVI has started pushing and mainstreaming the street vendors’ agenda in the election manifestoes of political parties.