NASVI calls for ‘Street Vendors Parliament’ in Delhi on 31 January 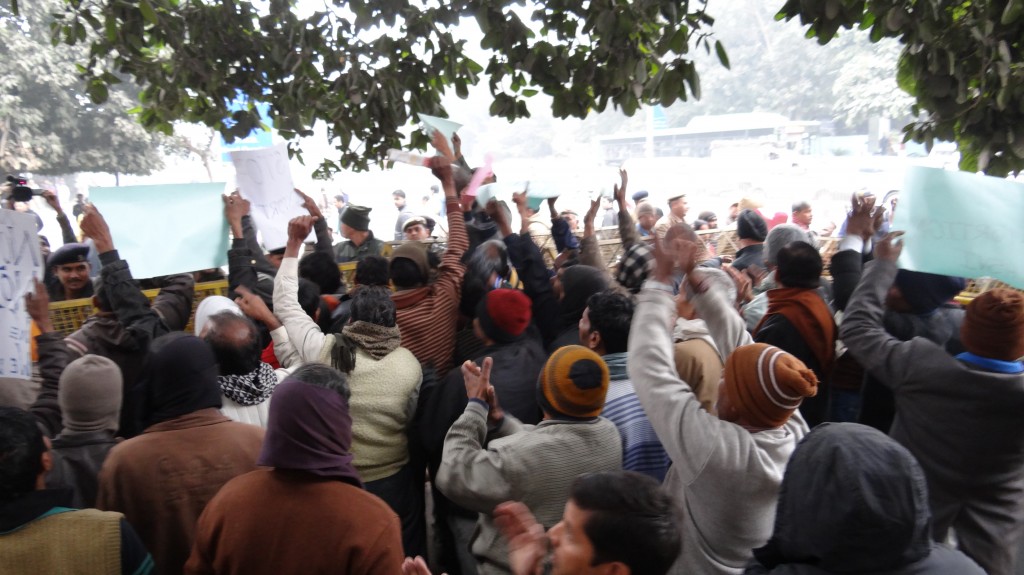 Delhi, 29 January: Thousands of street vendors would join the’ Street Vendors Parliament’ being organized by the National Association of Street Vendors of India (NASVI) at Jantar Mantar in Delhi on 31 January demanding passage of the Street Vendors (Protection of Livelihood and Regulation of Street Vending) Bill by the Rajya Sabha in the coming February session of parliament and stop on rampant extortion of money and terror of police and municipal bodies.

NASVI has invited several policy makers, political leaders, labour rights activists and other civil society organization representatives to join and address the Street Vendors Parliament. . In a campaign note released on Wednesday, NASVI has said, “ The sustained struggle of street vendors across states led to legislative development in the Lok Sabha which passed the much awaited Street Vendors (Protection of Livelihood and Regulation of Street Vending) Bill [ 6 September, 2013] and the subsequent order of the Supreme Court of India on 9 September, 2013. However, the bill is still pending in the Rajya Sabha. It had to get passed in the Rajya Sabha in the last session, but it could not.

There is hardly any area in the city where beat constables and municipal inspectors do not collect money from the vendors. They create terror, illegally collect hafta and victimize and evict vendors in cases of refusal. We have time and again raised these issues and sought time from the Delhi Police Commissioner to meet him on the issues. But, he refuses to meet us”.

The campaign note also raises the issue of non-compliance of Supreme Court order and says, “On 9 September, 2013, the Supreme Court directed all state governments and the UT administrators to ensure formation of Town Vending Committee (TVC) within two months and registration of all street vendors within four months. The apex court said that the direction would be binding till the enactment of the central law to protect the livelihood of street vendors.

The key direction no. 15 of the Supreme Court order read, ‘All the existing street vendors / hawkers operating across the country shall be allowed to operate till the exercise of registration and creation of vending / hawking zones is completed. Once that exercise is completed, they shall be entitled to operate only in accordance with the orders/directions of the concerned Town Vending Committee’. However, many municipal bodies and the police are openly violating the order of the Supreme Court and forcibly evicting street vendors from their livelihood sites.”

NASVI has launched a massive campaign in Delhi to mobilize street vendors to join the Street Vendors Parliament on 31 January. Over last ten days, more than 75 area/market meetings have been organized in Delhi. NASVI has also faxed/posted letters to Prime Minister Manmohan Singh, UPA Chairperson Sonia Gandhi, Parliamentary Affairs Minister Kamal Nath and heads of political parties to ensure that the Street Vendors’ Bill is passed by the Rajya Sabha in coming session of parliament which is going to commence from 5 February.