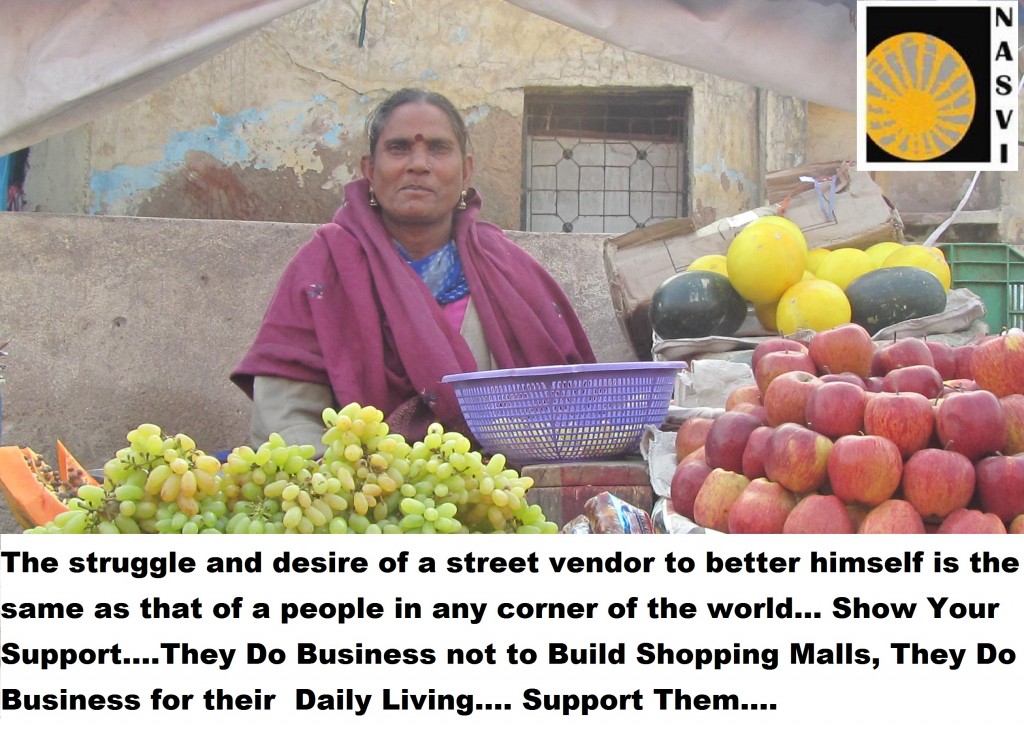 No More Terror of Municipal Bodies and Police

in Current Session of Parliament

The struggle for getting a comprehensive and effective central law to protect the livelihood, social security and human rights of street vendors has entered into the last phase with the Standing Committee of the Parliament set to table its report on the floor of the House and the expectations of street vendors increasing that the UPA Government would not make any further delay and get the Street Vendors (Protection of Livelihood and Regulation of Street Vending) Bill turn into an Act.

NASVI likes to share with you that the Government of India announced the National Policy for Urban Street Vendors in 2004 and it was revised later in 2009. The objective of the policy was stated to be providing and promoting a supportive environment for earning livelihoods to the street vendors, as well as ensures absence of congestion and maintenance of hygiene in public spaces and streets. However, the implementation of the National Policy for Street Vendors remained unsatisfactory in many states and the street vendors remained insecure and vulnerable. As the policy was not legally enforceable, several municipal bodies and police continued harassing and evicting vendors from their livelihood sites.

In October, 2010, the plight of street vendors also shook the conscience of the Supreme Court and it   categorically stated the need of law for street vendors. The apex court directed that the government to enact a law to ensure protection of right to livelihood of street vendors under Article 19 (g) 1 of the Constitution of India as the policy had not been successful enough to protect the right of vendors.

Post- Supreme Court verdict, the street vendors struggled a lot to influence the Government of India to bring in central law. They struggled on streets and advocated with the government for getting such a law.  Last year the sustained efforts of street vendors yielded result and the much waited Street Vendors’ Bill was introduced in the Lok Sabha on 6 September, 2012. The Bill had many key provisions enabling vendors to get access to rights and entitlements, but also had several shortcomings.

For last six months, large scale eviction of vendors/hawkers is going on in several cities and towns including Mumbai, Surat, Bangalore, Jaipur, Ludhiana and Lucknow.  In Mumbai, the intensity of the eviction started following the death of a hawker in a police raid on 11 January 2013. The Assistant Commissioner of Police (ACP) Vasant Dhoble, who was conducting the drive, was subsequently transferred. From the moment that happened, the police and the municipal authorities have come out in full force and have started evicting all hawkers in the city and its suburbs. The concerned authorities are taking revenge for the transfer of their colleague.

NASVI has taken up the Mumbai issue with the UPA Chairperson Sonia Gandhi, HUPA Minister Ajay Maken and Maharashtra Chief Minister Prithviraj Chauhan. Several prominent people including National Advisory Council members and labour experts have also written to the HUPA Minister and Maharashtra Chief Minister for ensuring stop on the eviction. Even protests have been organized in Mumbai, Delhi and other towns and cities.

In Delhi, the Municipal Corporations, now in three parts, and the New Delhi Municipal Council (NDMC) prefer to sleep over the applications of approximately 1.35 lakh street vendors (Applications  sought and submitted in 2007) and  still the vendors are struggling hard to get the vending licenses. In almost all areas of national capital, a parallel economy continues where the municipal authorities and the police collect “protection money” from the vendors, and when the vendors refuse to give such bribes, they are threatened and victimized.

In this situation, NASVI has planned to organize a ‘Street Vendors Parliament’ in Delhi on 13 March, 2013 demanding enactment of central law in the current budget session of Parliament and stop on harassment and forced eviction of vendors in cities and towns.

NASVI appeals to all to support the cause of struggling street vendors.