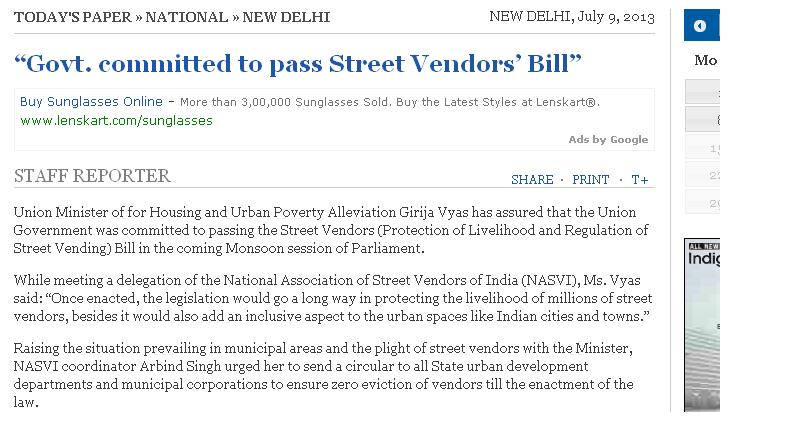 The Union Minister of Housing and Urban Poverty Alleviation Girija Vyas on Monday said that the government was committed and determined to pass the Street Vendors (Protection of Livelihood and Regulation of Street Vending) Bill in the coming monsoon session of the parliament. She said that once enacted, the legislation would go a long way in protecting the livelihood of millions of street vendors and it also would change the faces of Indian cities and towns.

The minister was talking to a delegation of National Association of Street Vendors of India (NASVI) led by its national coordinator Arbind Singh. The delegation had called on her to convey its greetings on the minister’s birthday.

Apprising the minister of the ground realities prevailing in municipal areas, and plight and travails of street vendors, Mr. Singh urged the minister to send a circular to all state urban development departments and municipal corporations to ensure zero eviction of vendors till the enactment of the law. He also called upon the minister to speed up the process of formulation of a comprehensive scheme for skills development and entrepreneurship development of street vendors under the National Urban Livelihood Mission.

It is worth recalling that initially the Street Vendors Bill was tabled in the Lok Sabha on 6 September, 2012 by the then Union Minister of Housing and Urban Poverty Alleviation Kumari Selja. The Bill had many key provisions enabling vendors to get access to rights and entitlements, but also had several shortcomings.  When the street vendors came to know about the shortcomings, they raised their voices and points of amendment to the Bill. Subsequently, the Bill was sent to the Standing Committee of the Parliament.

Things picked up pace when Ajay Maken took over the charge of the Ministry. He assured the street vendors’ body that all genuine concerns would be addressed. NASVI presented a list of amendments before Mr. Maken. In November and December, 2012, NASVI presented its concerns and points of amendments to the Bill before the Standing Committee.  When a hawker died in police action in Mumbai in January this year and it sparked off protests, Mr. Maken even visited Mumbai to meet the street vendors and the family members of the deceased vendors. He had announced that no eviction should take place till the law is enacted.

On 13 March this year, the Parliamentary Standing Committee on Urban Development tabled its report on the floor of the houses. On 1 May, 2013, the Union Cabinet approved the revamped Street Vendors Bill. The Bill had to get passed in the budget session itself, but the political logjam had compelled the government to adjourn the session before time.