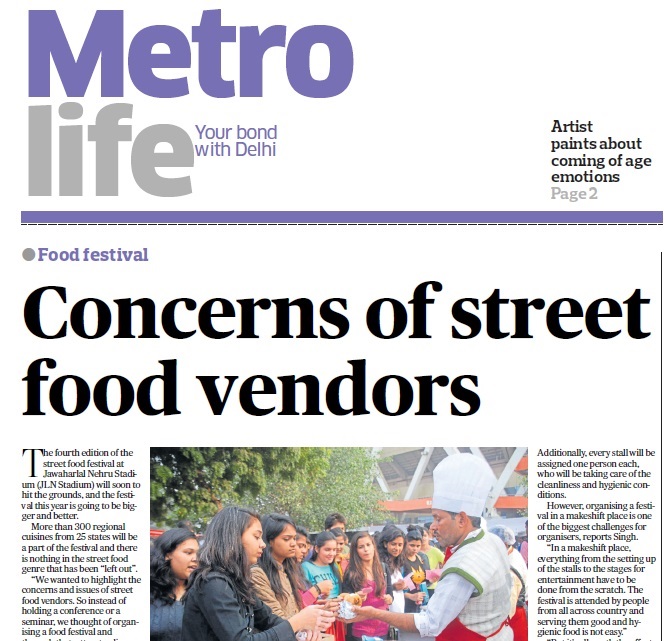 The fourth edition of the street food festival at Jawaharlal Nehru Stadium (JLN Stadium) will soon to hit the grounds, and the festival this year is going to be bigger and better.

More than 300 regional cuisines from 25 states will be a part of the festival and there is nothing in the street food genre that has been “left out”.“We wanted to highlight the concerns and issues of street food vendors. So instead of holding a conference or a seminar, we thought of organising a food festival and through that, attract policy makers so that they give these vendors the required space for setting up their stalls,” Arbind Singh, national coordinator, National Association of Street Vendors of India (NASVI), tells Metrolife.The festival, says Singh, has been taking place since the past nine years. Earlier, it was held at the Constitution Club of India, then at JLN Stadium and is now being implemented to be held in Goa.

Along with an extensive array of regional cuisines from across the country, the
festival will also include other informative events about street food and street food vendors, along with magic shows, performances by bands like Indian Ocean and meeting with celebrity chefs Sanjeev Kapoor and Kunal Kapur.

“The purpose of the festival is to bring street food vendors in the mainstream food scene so that they get their deserved space in the cities and respect by people,” adds Singh.

This year, the festival is organised by NASVI and Food Safety and Standards authority of India (FSSAI), which according to Singh is a “great achievement” for the member-based organisation (NASVI) and also “raises the bar of the festival”. Read More