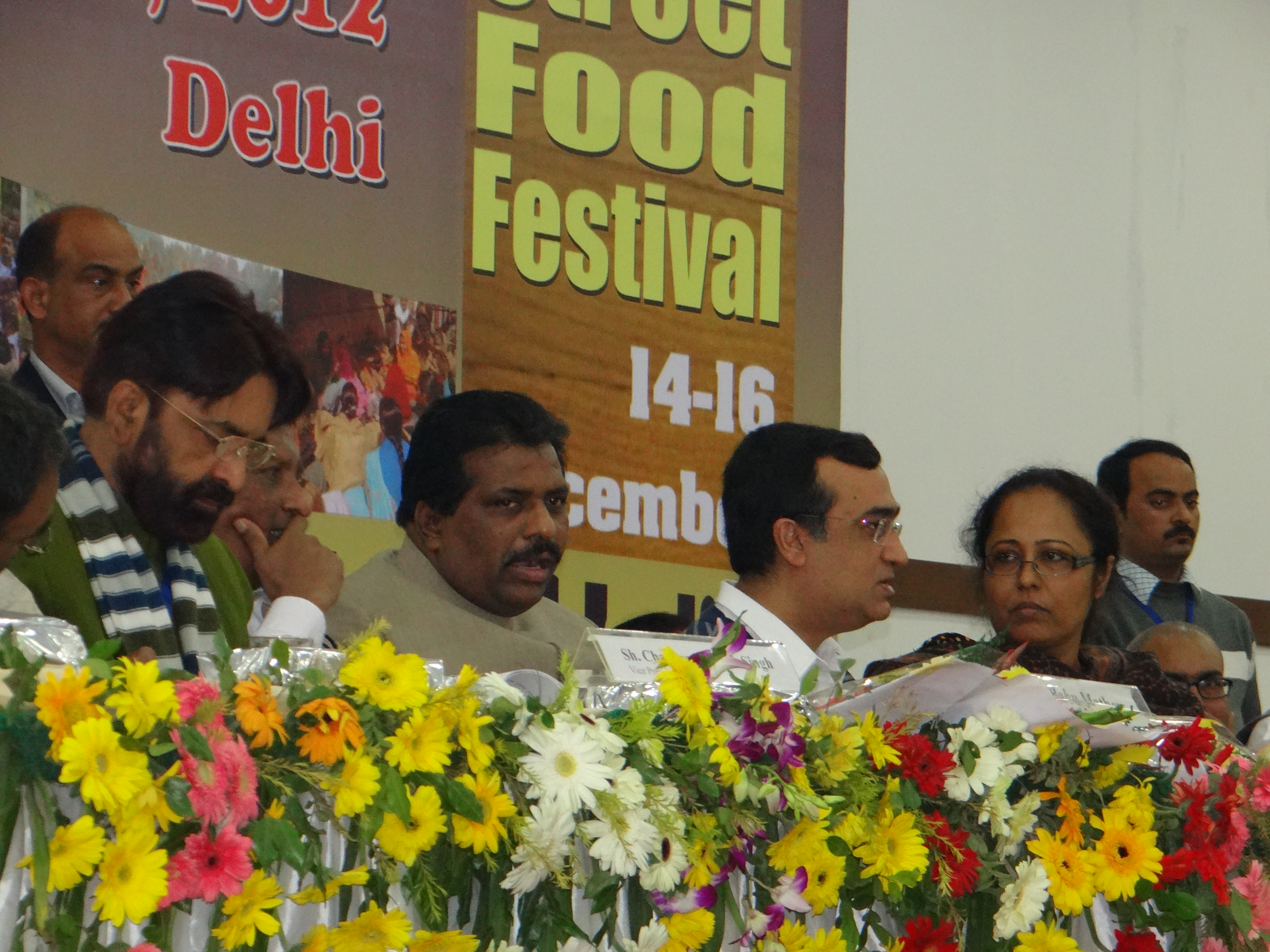 Taking a major leap forward towards getting a comprehensive and effective central legislation in favour of street vendors and influencing the government as well as the urban bodies to create conducive environment for street vendors including railway vendors and street food vendors, National Association of Street Vendors of India (NASVI) organized a four day long campaign and advocacy based events at Constitution Club Annexe in Delhi from 13 to 16 December, 2012.  While the first and the second day marked National Convention and Annual General Meeting (AGM) of Street Vendors, the second day evening and the following days witnessed grand Street Food Festival.

More than a thousand street vendors and their representatives joined the national convention. The theme of the convention was “Challenge 2040: Countering the Marginalization of Working Poor and Need of Inclusive Central Law for Street Vendors”. It was inaugurated by the Union Minister of Housing and Urban Poverty Alleviation Ajay Maken who announced that enacting effective central legislation to protect right to livelihood of street vendors was one of top priorities of the government. The Union Minister of State for Labour and Employment K. Suresh and Bihar Urban Development Minister Prem Kumar also joined the convention as special guests. Besides, several municipal executives, mayors, livelihood and labour experts and representatives of development agencies also participated in the convention.

Addressing the convention, Mr. Ajay Maken said, “Reign of fear and terror of municipal bodies and police against street vendors must stop and right to secured and dignified livelihood must be ensured through effective legislation”.  “The government introduced the Street Vendors Bill in the last session of the Lok Sabha, but the street vendors still have issues of concerns and they want an effective central legislation which can ensure protection of their rights and entitlements. The government is live and responsive to those concerns and we would ensure that livelihood protecting effective central legislation gets enacted”, Mr. Maken said amidst thundering applause by street vendors. He said that the rules or schemes should not usurp the rights mandated by the law.

The minister advocated strongly for the inclusion of railway land under the purview of street vendors’ legislation and said that he would take up the matter with the Ministry of Railways. He said that the natural markets have had been the intrinsic part of urban landscape and life and those could not be uprooted. He announced that sufficient allocation would be made under the National Urban Livelihood Mission for the welfare and economic upliftment of street vendors. The minister also announced that his ministry would roll out an innovative loan scheme for street vendors soon and the allocations would be made under different schemes for developing model vendors’ markets in different cities.

The minister also felicitated Bhaskar Shrinivas Raje Urs, a street vendor leader of Mysore for his exemplary courage to protect the rights of vendors of Mysore. He was awarded for his ability to trigger organizing among vendors, build market based organizations and city level federation and successful struggles against evictions and police atrocities. A three member independent jury selected him for the award. Before the award ceremony, a short film on all seven shortlisted nominees was screened in the convention.

The Union Minister of State for Labour and Employment K. Suresh said, “The street vendors are a neglected lot and hence their welfare is of utmost importance. The vendors do need social protection and more efforts would be made by the government towards this end.”

The minister dwelt extensively on the structure and salient features of the Rashtriya Swasthya Bima Yojana (RSBY) and said that the scheme would include all street vendors. He, however, added that many bottlenecks were there in the implementation of the scheme and the ministry was finding ways to improve the implementation.

Earlier in the day, outlining the context and objective of the convention NASVI national coordinator Arbind Singh said, “Urban India needs inclusive legislation and responsive municipal governance for the empowerment of street vendors. The street vendors contribute to economy as well as society, but they remain growth deficient. We have to fight out the factors which lead to such marginalization”. He called upon the street vendors of the country to intensify campaign for inclusive legislation and municipal reform.

The AGM was attended by approximately 500 NASVI member delegates. The delegates discussed on the Annual Report presented by the NASVI Coordinator and passed it along with Membership and Financial Reports. The AGM took stock of the situation prevailing in different states and the issues emerging before the vendors, particularly the issues of eviction and police harassment. It also assessed the efforts and the progress made in last one year on organization building and advocacy fronts, and finalized the action plan and strategies for 2013.

The crescendo was the Street Food Festival which saw footfalls of more than 20,000 people from cross sections of society.  It was inaugurated by the Union Tourism Secretary Parvez Dewan.  The vibrant festival showcased the social- cultural diversity of Indian street food and showed how much important is to integrate street food with tourism to propel economic growth in an inclusive manner. The festival had 47 street food stalls of 15 states from down south to up north and from eastern to central-western provinces.  The mind boggling delicacies served in the festival had more than 200 recipes. The cultural events like magic shows, folk songs, interactive sessions for children and lucky draws were additional attractions of the festival.

A large number of foreigners also came in, enjoyed the treat and eventually got charmed and conquered by the variety and aroma of the street foods. A team of Singapore Tourism also joined the festival and invited NASVI to participate in the World Street Food Congress which is going to take place in June, 2013 in Singapore.

On the last day of festival, the team of Vasudev Saneja from Patiala in Punjab serving Makke ki Roti with Sarson ka Saag and Paneer won the maximum number of popular votes and it was awarded with a citation and a cheque of Rs. 25000.  The Food Safety and Standards Authority of Delhi Government also awarded the best three street food vendors for best serving (team of Tirath Singh from Ludhiana in Punjab), best nutritional value (team of Sudipto Banerjee from Kolkata in West Bengal) and best hygiene maintenance (team of  Gulab Singh from India Gate in Delhi).

The four day events received huge media response and attention of policy makers and civil society organizations as well as the larger citizenry.  The events increased the confidence of NASVI and prepared it to march ahead for more and more successes in 2013.