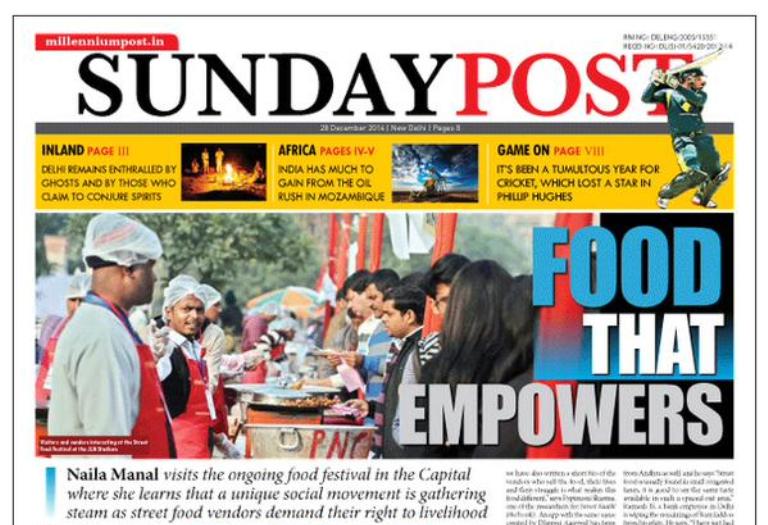 Amidst foggy night, cheerful and satiated crowd, the four-day long National Street Food Festival organized by the National Association of Street Vendors of India (NASVI) concluded here in national capital on Sunday with the promise that it would bring more delight and cheers in the coming year. The last day of the fest saw huge footfalls with thousands of foodies thronging the sprawling Jawaharlal Nehru Stadium complex to savour the taste and aroma of diverse range of street foods from down south to north and from west to east. It was amazing to see such a battle of tastes with riot of smoky colours coming out from the cooking platforms of 200 food stalls representing age-old vibrant culinary tradition and culture of as vast as twenty five states of India.

He further said that street food culture, which was dying gradually, has been kept alive by these vendors. These street food vendors should be encouraged and supported by all. Kudos to NASVI for standing by them and helping them to display their culinary skill at such a grand platform. He thanked NASVI co-ordinator Arbind Singh for inviting him to launch a book on street food vendors. He promised NASVI of his wholehearted support in future endeavors.

Food manager NASVI Sangeeta Singh spoke briefly about how the idea of this book came to their mind. She said, “This book tells us how these street food vendors are different from others. They are well trained on hygiene and know-how to present a delicacy. This book tells you about how their delicacies are different from that of others. It gives you a brief account of these vendors, their delicacies and its history. It’s our sincere effort to give these vendors their due recognition. This book is a must in every home.”  She thanked Siddharth Mishra, the man behind the idea of this book.

Matthew Cherian, Country Director, HelpAge India said that it’s a must read book as it is quite informative. And it is reasonably priced as well.

On the last day of the food blast, Kasim bhai, street food vendor of Lucknow who created wonders with his signature Gahaloti Kebab won the most popular male food vendor award.  The most popular female food vendor award went to Jeevan bala and Shushila Bala of  Indore for their Sabudan Khichadi and Moong dal ka Halwa. The award for most hygienic stall went to Kafil Ahmed of Etawah, whereas most innovative dish award went to Emanuel boro of Jharkhand for his dish katnousi. The second most innovative dish award went to Disnesh Kumar of Bihar for his green litti. The best team work award went to Gokul Bhai, Amrit lal and Shiv Gobind. Most Popular award male (Delhi) went to Shyam  Ji from okhla and most popular award for female (delhi ) went to Radha. Five consolation prizes were also given. The awards were given by celebrity chef Kunal Kapur.

After the thunderous success of the fest, NASVI national coordinator Arbind Singh said, “The street food vendors have huge potential to contribute to society and economy. As grassroots entrepreneurs, they generate cultural capital and employment and strengthen food security system. They do need support and promotion of government, municipal authorities and police as well as society.  The cities are changing and several opportunities are coming up. The street vendors must be made a partner in the process of change and development as they are integral part of city economy and society”.