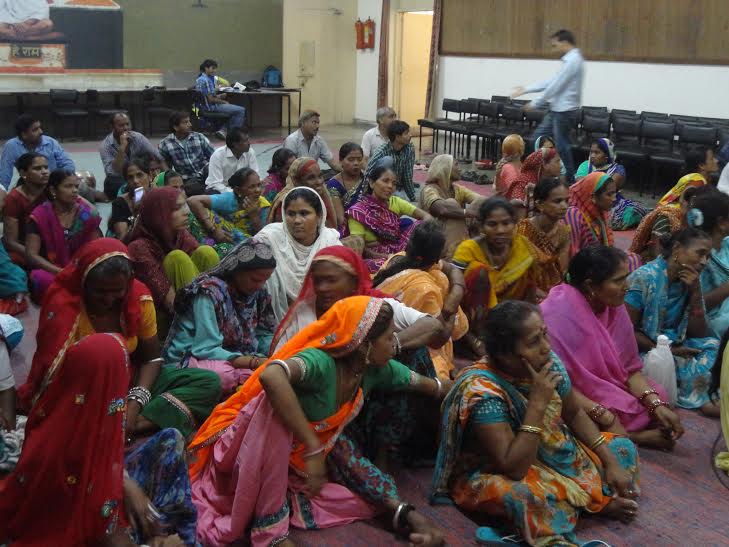 VOICE CONCERN OVER DELAY IN IMPLEMENTATION OF VENDORS ACT 2014

New Delhi 13July 2015; Women Vendor leaders from across Delhi gathered under the platform of National Association of Street Vendors of India ( NASVI) to demand their rights under the Street Vendors Act 2014 . They said that we were under the belief that our lives would be bettered through the passage of the Street Vending Act but instead the condition has been deteriorating ever since the passage of the Act – The extortion amount has been increased. Goods are confiscated without any reason and markets are evicted mercilessly .Most markets do not have basic sanitation facilities and suffer from various forms of abuse by anti socials.

Mr. Arbind Singh , Coordinator of NASVI pointed out that under the Act ,40 % of the TVC has to be constituted by vendors and of this 40% ,at least one third has to be women . Thus, he informed, NASVI has begun serious campaigns to bring the women leaders to the front and develop more women leaders from among the street vendors. He added that soon NASVI will organize a National Conference of women TVC members.  He said that vendors are being forced to go to High Courts in desperation but added that large number of vendors cannot afford going to the Court.

Ms. Nisha, an intern with NASVI informed that participants That NASVI is developing a data base of all existing women vendors of Delhi and soon NASVI will organize exposure visit to other states to enhance their understanding of strong organizing to change their lives. She said that now women vendors will play a more active role in getting the Act implemented in Delhi and NCR

It must be mentioned that women vendors constitute around one third of the total vending community. They play a vital role in commodity distribution system of the country and most of them are also female headed households.  Unfortunately the police and municipal authorities and mafias discriminate further and women vendors are exploited much more that their male counterpart.