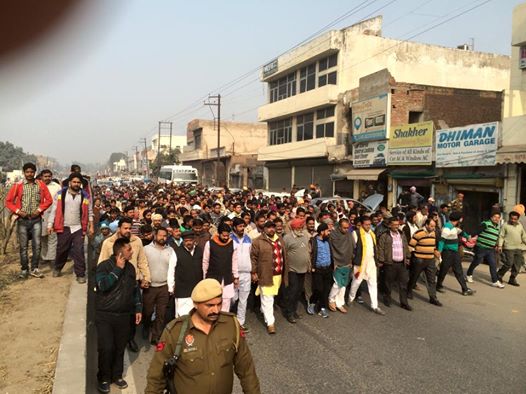 Miffed with the municipal corporation over its recent anti-encroachment drive and delay in the implementation of the Street Vendors (Protection of Livelihood and Regulation of Street Vending) Act, 2014, a large number of street vendors laid siege to the civic body’s office on Thursday.

Led by the local Rehri Owners’ Welfare Association, over 600 street vendors blocked the main entrance to the office, forcing senior officials to leave the office from the rear gate in the afternoon. National Association of Street Vendors of India coordinator Arbind Singh also joined the protesters in condemning the recent MC drive.

The local Shiv Sena unit, too, slammed the MC for uprooting street vendors from footpaths without rehabilitating them, as mandated in the act. Rehri association president Vasudev said that the act was in force since 2014, but the MC did not bother to take any steps to rehabilitate the vendors.

“We will not allow them to take away our business. Till the time the MC does not implement the act, our resistance will continue,”he said.

National-level leader Arbind Singh said the MC’s move to clear footbaths on the directions of the Punjab and Haryana high court was not acceptable. “What is the status of the implementation of the Supreme Court order that specifically directed every state to implement the Street Vendors Act in toto before uprooting the vendors?”he questioned.

Accusing the MC of taking “selective”action, he said: “It is sad the civic body does not take any action against encroachments by big showrooms and oppresses the poor, who earn their livelihood through hard work.”

Arbind Singh further cornered the MC by claiming that it had land for setting up hotels and industries but did not make vending zones to accommodate the vendors. While addressing the gathering, he said: “The next time the MC comes to take away your rehris, you simply tell them to implement the act first.”

Anti-MC slogans filled the air for more than two hours before a delegation of street vendors, along with Arbind Singh, met municipal commissioner Indu Malhotra and mayor Amarinder Singh Bajaj to submit their demands. Before marching to the MC office in the morning, the street vendors held a protest near the bus stand too, resulting in a traffic jam for a brief period.

MC on the back foot

The MC had halted the drive to clear footpaths as per the high court’s directions due to the recent Shiromani Akali Dal rally. A senior official said that with vendors strongly opposing the move, it will be difficult for the MC to restart the drive and comply with the court’s order.