Street Vendors’ Bill should not get delayed, NASVI urges Prime Minister and demands tabling of Bill in upcoming session of Parliament 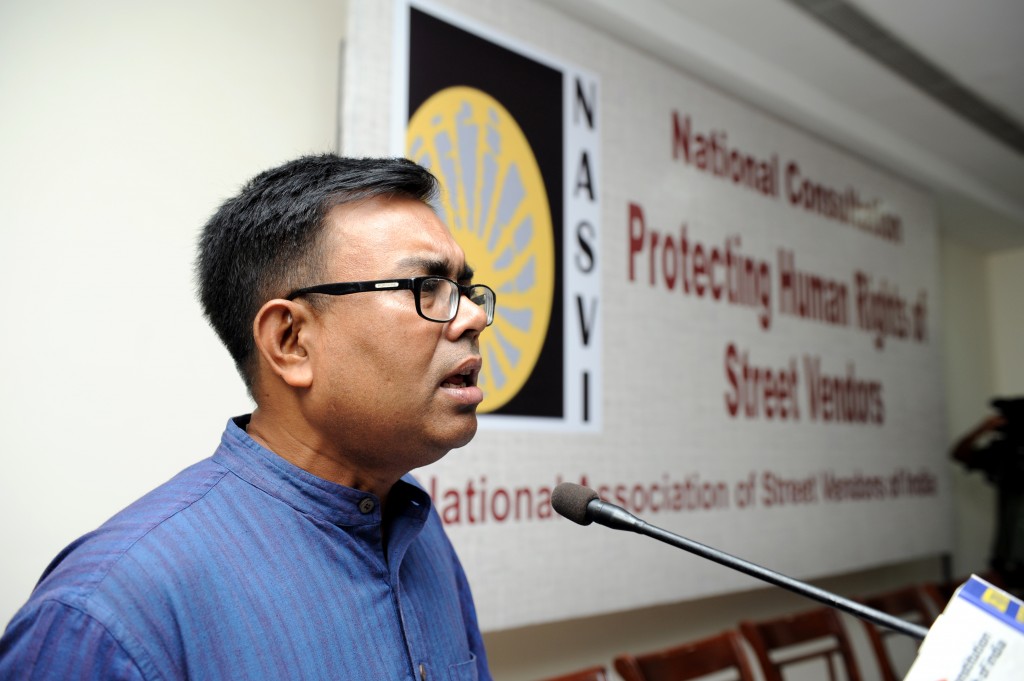 New Delhi, 4 August:  National Association of Street Vendors of India (NASVI)  which has long been struggling for a comprehensive central law in favour of street vendors on Saturday expressed anguish over the delay in clearing  the much awaited Street Vendors (Protection of Livelihood and Regulation of Street Vending) Bill, 2012 and called upon the Prime Minister to see to it that the Bill is cleared by the Union Cabinet as early as possible so that it can be tabled in the upcoming session of Parliament.

NASVI National Coordinator Arbind Singh said that the Street Vendors’ Law would be a major progressive legislation as it would help immensely in ensuring the fundamental right to livelihood of millions of street vendors and in making cities and towns regulated in a very inclusive manner.

Describing need of central law as a critical social-political need of today’s urban India, Mr. Singh said, “ the long pending street vendors’ bill should not get delayed and the Prime Minister should ensure that the Cabinet clears it immediately so that it can be placed in the coming session of Parliament.”

It is worth recalling that the Government of India had adopted a National Policy for Street Vendors in 2004 and the Ministry of Housing and Urban Poverty Alleviation (MHUPA) revised it later in 2009 and also brought in Model Bill-2009. However, the policy implementation remained unsatisfactory in many states. Moreover, the policy vagueness and legal frameworks have had conflicts with the legal provisions in the municipal laws and the Indian Penal Code.

Though NASVI started raising the demand for central law for street vendors in 2009 itself, but in reality NASVI campaign for central law took prominence in October, 2010 when the Supreme Court also observed that the National Policy had not been able to protect fundamental right to livelihood of vendors and directed the government to convert the National Policy for Urban Street Vendors into a law.

Post- Supreme Court verdict, the street vendors under the banner of NASVI struggled a lot to get the MHUPA convinced on the critical necessity of central law.

NASVI organized vendors to come on to the street in several cities in 2011 and it approached the National Advisory Council (NAC), Prime Minister and UPA Chairperson for getting a central law. It also contacted several Members of Parliament and urged them to write to the Prime Minister. In May, 2011, the NAC recommended to the Government of India to bring in central law in favour of street vendors.

After NAC recommendation and sustained campaign of NASVI, the MHUPA swung into action and the process of drafting the Bill started. The process took months and finally it went to Law Ministry for vetting in June, 2012. Last month the Law Ministry cleared it and now it is listed for approval by the Union Cabinet.

Once enacted, the central law would prevail over all state municipal laws as well as police acts to the extent that they are inconsistent with the law for street vendors. It also would do away with the existing license system that has become a tool to victimize and harass the street vendors in almost all municipal areas in the country.

According to sources, as per the Bill anyone over 18 years can apply and register as street vendor with respective Town Vending Committee (TVC) on payment of one-time fee. Once registered, they will be given identity cards entitling them to sell their wares in specified vending zones.

The decision of making vending zones would be taken up by the respective TVC.  Every TVC would have at least 40 per cent members from the street vendors (one-third of which shall be women vendors). Besides, the Bill contains provisions to protect and promote natural markets, weekly markets and night bazaars where vendors and hawkers can sell their wares.

The proposed legislation also has clear provisions for grievance redressal and transparency. The laid out provisions and mechanisms protect vendors from confiscation of their goods and forced eviction by authorities. An arrangement of appellate system also has been put in the proposed law wherein local authorities have been empowered to set up a permanent committee consisting of a person who has been a sub-judge or a judicial magistrate to redress vendors’ grievances.