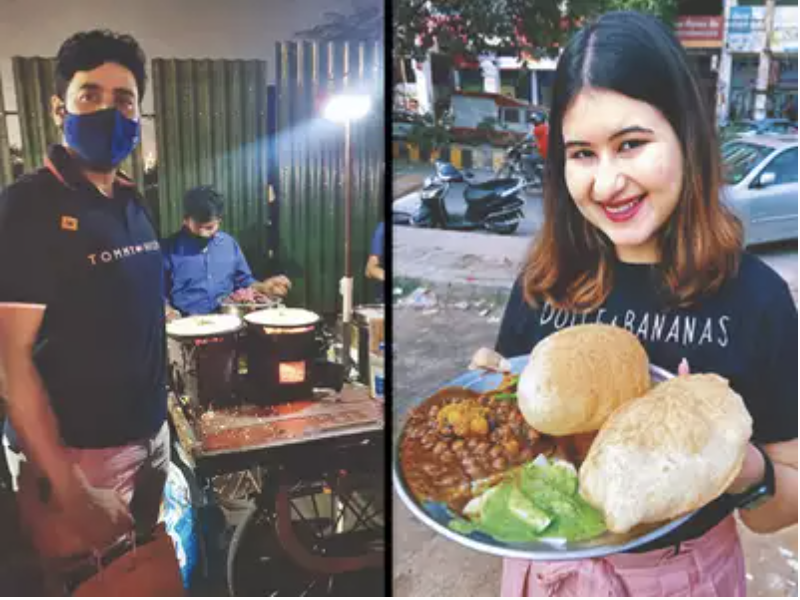 MUMBAI: The golgappas were a bit soggy but not enough to turn Kalyan-based “Golgappa girl” Pooja Bathija away from ‘pizza shots’–one of the many hidden curiosities of Ghatkopar’s khau galli. The Rs 140-worth dish refers to the result of a fire gun singeing a layer of cheese onto six pani puris stuffed with capsicum, onion and corn. And even though you can’t ask for an extra puri at the end, this Rs 140-worth snack represented something special for the cherubic street food vlogger Bathija, who had set out to Ghatkopar to shoot her reviewing videos in October after spending months longing for and recreating her favourite chaat items at home. “Guess what ‘Golgappa girl’ is having after lockdown,” she told the camera on discovering underneath the sheet of cheese, the puris she gets her famous online alias from.
Sporting masks around their necks the way Shashi Tharoor wears his spectacles, street food lovers have started making rounds of iconic joints and “hidden gems” post lockdown. “Tired” of home cooked meals, Goregaon resident Ketul Shah has been making a dash to neighbourhood ‘thelas’ for gorging on dabeli or sandwiches once a week since the city unlocked. “I have never had as much home-cooked food in my entire life as I did during the lockdown. I used to be a regular at street food carts earlier and was missing their fare,” says the 30-year-old businessman.
Things are not the same but the appeal of street food is clear to Bathija, who has not only seen an uptick in her viewership post-lockdown but also witnessed taste buds prevail over safety concerns at many stalls barring a few exceptions. At Yummies in Bandra, the tray bearing manchurian, fried noodles and schezwan rice with their special chutney came to her car while a bakery disallowed her from entering the premises for good reason.

Though street food carts have re-emerged since October, business is nowhere like what it was before. “We have still not got back at least 40% of our clientele,” says Pravin Rawal, who runs the three-decade-old Pravin Dabeli at Ghatkopar East. One of the reasons, Rawal believes, is local trains not being operational for the general public. “I used to have customers coming over from Thane, Mulund, Dadar and Matunga. They can’t unless trains restart operations,” he says.

The iconic Jay Sandwich stall outside RD National College in Bandra has shrunk to half its original size. “My workers left after the lockdown began and most are yet to return. We opened up only 10 days ago and right now, I have a single worker,” said the owner, adding that business has been badly hit as colleges are shut and students comprised a majority of his clientele. Earlier, customers had to wait for their turn at the stall which is no longer the case. “There are more takeaway orders now,” said a worker.

Shah feels street food vendors are taking more precautions than anyone can imagine as it’s their business on the line. His sentiments are echoed by Vile Parle resident Mohit Gandhi. “I make it a point to check, before eating at a street cart, if the vendor has worn a mask, a safety cap and is using a sanitizer. In most cases, vendors and their workers are very careful and I’ve not been worried of catching a Covid-19 infection,” the 35-year-old lawyer said. Gandhi has been wolfing down on misal pav, vada pav and frankie once every fortnight at Ghatkopar. Having frequented the same street carts since he was a college-goer, he finds it very difficult to keep away.

On their jaunts, food vloggers such as the 1-million-strong-subscriber-base-boasting Priyanka Tiwari have found that not many kiosks have returned after lockdown. In September this year, an initiative called #BringThemBack, saw chef Ranveer Brar tie up with NASVI (National Association of Street Vendors of India) to launch a fundraiser to prepare vendors to return to business. The programme included digital training sessions on hygiene as well as safety kits that would enable vendors to return to work in a post COVID world. Around 2 lakh vendors completed the training received a certificate from Food Safety and Standards Authority of India (FSSAI) and a protection kit that included items like gloves, masks, sanitizers and headgear. “To make them stay in the food ecosystem, we decided that the interaction needed to be far more meaningful,” says Brar, explaining the reason behind the videos that turned out to be “emotionally uplifting” for many vendors. “They feel needed,” says Brar, who feels Covid-19 had “levelled the understanding of hygiene awareness” among vendors.

Rawal is also concerned that many people seem to have forgotten that the pandemic is not over. “People huddle around the cart until a cop comes over and yells at them to stand at a distance,” he says. “Why do we still have to be told to maintain social distancing?”