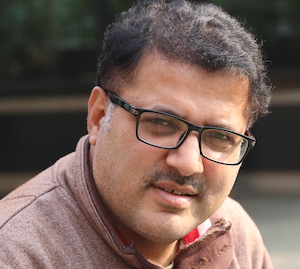 Rakesh Kr. Tripathi, Programme Director, His responsibilities include: facilitate in Organizing and Mobilizing street vendors organization as well as other Informal Workers for their right to livelihood and Social protection; Liaison with different Ministries such as Urban Development and Housing, Labour Resource, Social Welfare, and local self Government.

He has been an active member since the formal establishment of NASVI and played an important role in the framing of the Street Vending Act 2014. In some states, he also assisted the state government in Making Street vending Rules and Schemes. He represents NASVI to different state Government on the issue of proper implementation of Street vending Act. He also looks after leadership development and Negotiation Skills, training to subordinates, Member organizations, developing manuals for Informal Sector Workers, Institution Building (like; society, cooperative, Union). He influences Policy makers for making Rules, Acts, Laws for Informal Workers through Conducting and organizing seminars/conference/Holding Rallies/Road Shows/ Street food festivals etc.

He is currently focusing currently: the focus is on compliance with the law and formation of Grievance Readressal Cell. He is National Secretary of National Union of Informal Workers (NUIW). He has a Master degree in Political Science apart from a Post Graduate Diploma in Rural Development (PGDRD).