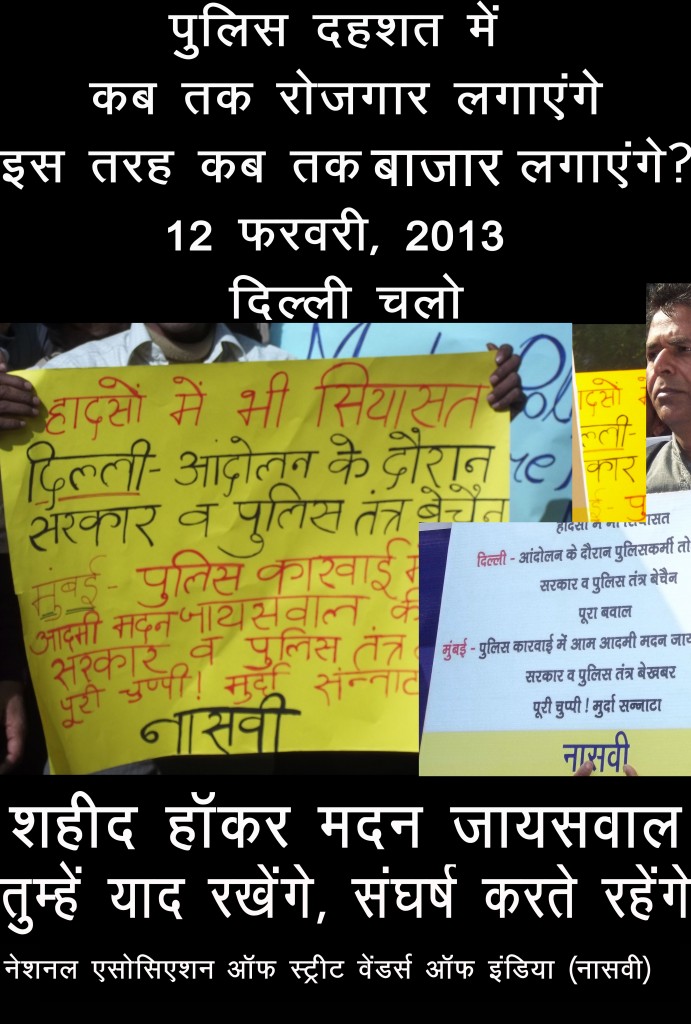 National Association of Street Vendors of India (NASVI) has time and again asserted that the street vendors serve society and contribute immensely to city economies, and help cities and towns grow in an equitable and socially inclusive manner, and therefore, their contribution and rights must be recognized and protected by the society, the government, the municipal bodies and the police forces through inclusive legislation and accountable governance.

Recently when a hawker Shri Madan Jaiswal, a migrant from Bihar, died during forced eviction launched by the infamous Mumbai ACP Vasant Dhoble in Mumbai on 11 January, 2013, NASVI called upon its member organizations of several states to come on to the streets demanding institution of murder charge against the infamous Mumbai ACP and the compensation of Rs. 25 lakh to the family of the deceased hawker.

It is not just Mumbai case, whenever the human rights of street vendors get trampled by the police and municipal authorities; we get anguished, resent and assert during protest campaigns that the street vendors are the eyes and the ears of the city.  They make markets and public places safe and secure. If they are not at railway and bus station premises, the areas would be prone to loot and crimes. We serve people, help local economy grow and make city inclusive and dynamic, but the authorities refuse to legalize us and give us the space and opportunities to earn a descent living.   The police and municipal officials exploit us financially, but when we refuse to entertain them, we face threats, harassment and forced eviction.

The Supreme Court of India also ruled on many occasions that the street vendors/hawkers have their fundamental right to carry on their businesses on streets and pavements, and this right must be protected by the government through legislation and administrative efforts.

Now, the Justice J.S. Verma Committee Report, which was constituted by the Government of India on 23 December, 2012 in the wake of nationwide outrage and public protests against the brutal gang rape of a girl in Delhi on 16 December, submitted to the Prime Minister of India on 23 January, 2013 has also found the assertion “Street vendors make city streets safe” right and the Report has recommended under its Recommendation No. 17:

“Street vending should be encouraged to make the bus stops and footpaths safe for communities and pedestrians, in addition to providing street food for the common people.”

The Report has come down heavily on the lack of constitutional values and moral vision among policemen and officers and it has recommended several urgent measures for police reform including community policing involving communities and citizens, police accountability to the public and substantial improvement in the standard of policing through building positive and cooperative relationship between the civil society and the police.

The Report has said that the country must account for the tears of its people and the rights and dignity of the women, the children and the marginalized must be protected by all wings of the state.

NASVI calls upon the street vendors’ organizations, community based groups and civil society organizations to mount pressure on the government to ensure