For Delhi’s street vendors, it’s not business as usual after HC order 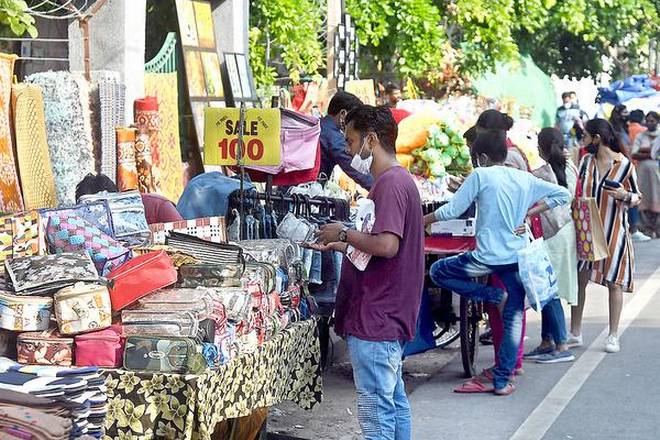 The removal of “illegal” hawkers and street vendors from Connaught Place market following an order from the Delhi High Court has left many worried about their future. While some attempt to carry out their businesses around Connaught Place, most say they “have nowhere else to go”.

According to the Delhi Street Hawkers Survey conducted by the government, 73,716 hawkers have been identified across the city from January 1 to September 30 this year and 54,599 have been approved. However, after multiple appeals by municipal councillors and street vendors’ associations, the Delhi Government has extended the survey period till December 7 in order to identify more street vendors.

In a dilemma
For Ashraf, a 30-year-old hawker from Bihar who sells apparels, the decision to bar “illegal” street vendors from operating in Connaught Place market has left him in a dilemma.

“During the lockdowns, I stayed back and struggled for survival. I do some tailoring on the side to support myself and selling apparels around the market helps boost my earnings. I earn up to ₹600 on a good day through street vending, but I earn nothing on a bad day. The authorities should think about the poor. When there is no system in place for us, where will we go?” Mr. Ashraf asked.

Agreed Rajbeer Singh, a 55-year-old street vendor in Sarojini Nagar market, who said that he was under “constant fear” of being “chased away by civic authorities”. Mr. Singh, a father of six, said he was a farmer in Moradabad and had to sell his farmland to pay for his medical expenses.

“I moved to Delhi six months ago after having sold my land. I mostly engaged in sugarcane farming and things were fine till I developed a throat-related ailment. Street vending is risky because authorities often chase us away and seize our goods. If there is an order for permanently removing street vendors, then people like me will be left helpless,” Mr. Singh, who sells headbands, said.

Hawkers from the city’s Lajpat Nagar market also expressed similar concerns with most stating that the recent High Court order had “instilled fear and uncertainty” among them and the authorities should provide them “with a designated space”.

Insufficient measures
Atul Bhargava, president of the New Delhi Traders’ Association (NDTA), who had filed the plea in the Delhi High Court for the removal of illegal hawkers and street vendors, said the NDTA was “not against the livelihood” of the hawkers.

“Corridors are meant for walking and not for hawkers to be sitting there. If the government wants it, then allot the hawkers a proper space and let them be over there. Cleanliness around the market is not being maintained by hawkers in the spaces they operate. Would anyone feel safe with them sitting there?” asked Mr. Bhargava, adding that the respective civic body was not carrying out its duties.

However, shopkeepers at Connaught Place market said that they had “no qualms” with the hawkers and their presence brought “increased footfall”.

“These hawkers hardly make enough for a day and now they have been chased away without any alternative. In fact, their presence helped our business and brought more customers to the market,” a shopkeeper said.

Arbind Singh, president of the National Association of Street Vendors of India, said the Delhi High Court had ordered to remove “illegal hawkers” from Connaught Place market, but the New Delhi Municipal Council (NDMC) “must decide who the illegal vendors are”.

He referred to Section 3.3 — Chapter 2 — of the Street Vendors (Protection of Livelihood and Regulation of Street Vending) Act, 2014, which states, “No street vendor shall be evicted or, as the case may be, relocated till the survey specified under sub-section (1) has been completed and the certificate of vending is issued to all street vendors.”

“The NDMC has not done the survey even after seven years of the Act being passed. After the PM Street Vendor’s AtmaNirbhar Nidhi (PM SVANidhi) scheme was launched, only 135 vendors in NDMC areas were able to avail of the benefits under the scheme. The elite mindset is that the cities are not meant for these street vendors; they want the latter to come, serve and go back,” Mr. Singh said, adding that the NDMC was using the High Court’s order to interpret “all street vendors” as illegal.