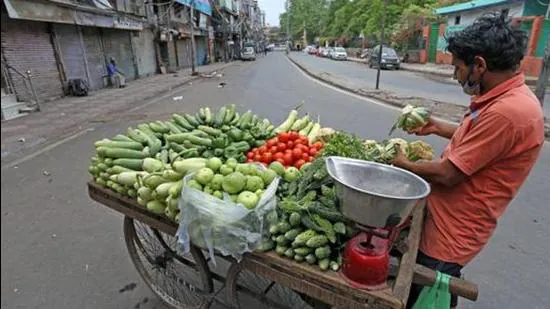 After several appeals and complaints by the street vendors’ associations and municipal councillors, the survey for identifying street vendors in the national capital has been extended by two more months and it will now end on December 7, 2021.

The order issued by the Delhi government’s urban development department said many street vendors, who had gone to their home states during the Covid-19 lockdowns, are only now returning to the city weekly markets that had remained shut for a long time on account of the pandemic and have only recently started operating on a rotational basis.

The Delhi government ordered the town vending committees to carry out the survey to identify all street vendors in the Capital in 2015, in line with the Street Vendors (Protection of Livelihood and Regulation of Street Vending) Act, 2014. The survey, which aims at identifying eligible street vendors and give them a legitimate status, began in January this year and concluded on September 30, 2021, and 71,371 vendors were identified in the exercise. The town vending committee is headed by the zonal deputy commissioner and has street vendors as its members.

The National Association of Street Vendors (NASVI), however, argued that there are at least two lakh vendors in the city.

The extension order issued by deputy director (local bodies) said hawkers and weekly market associations had submitted representations seeking an extension of the survey time period so as to identify more number of street vendors. “Two months additional time, from October 7 to December 7, 2021, has been granted to cover the areas which are either still not covered or partially covered,” the order issued separately on October 6 said.

The urban development department has also raised the issue of publishing the details of the identified street vendors in the survey concluded on September 30. Of the 71,371 identified vendors, the local bodies have published the details of only 48,912 vendors.

Richa Sinha, a spokesperson for NASVI, said that the association welcomes the extension of the survey period. “The survey process should be more dynamic in the extension period and it should include service providers like cobblers, cloth ironing persons etc., who were earlier left out. “The first part of survey also failed to capture the people carrying out street vending in deep pockets of residential neighbourhoods. The town vending committees should provide a window of time, after the conclusion of the survey in December, during which time vendors who have been left out can submit their applications,” she added.

Many councillors have also alleged irregularities in the survey and the north corporation ordered a probe last week when abnormally high numbers of vendors were identified in Jahangir Puri ward.

The east corporation has found 10,039 vendors in Shahdara South zone and 9,604 in Shahdara North zone. Mayor Shyam Sunder Aggarwal said the civic body will make all efforts to cover the remaining vendors during the extension period.