After Bihar and Odhisa, Karnataka initiates implementation of the Central Act 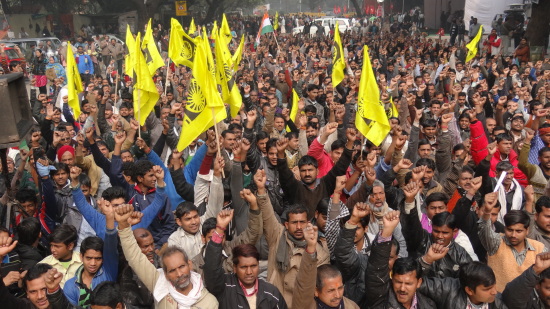 Following Bihar and Odhisa, the state of Karnataka and Himachal Pradesh has also promoted their moves in the implementation of the Central Law for Street Vendors by drafting the schemes under Section 38 of the Act. The schemes formulated have been forwarded to the government to get it executed at the earliest for effective implementation of the Act.

Directorate of Municipal Administration, Mangalore City Corporation, in collaboration with NASVI, organized a one-day workshop on 18th October, 2014 in Mangalore. The main objective of the meeting was to discuss the present status of the implementation of the Street Vendors (Protection of Livelihood and Regulation of Street Vending) Act, 2014 in the state and to develop further strategies of implementation. Minister for Urban Development, Karnataka, Mr. Vinay Kumar Sorake; Mayor Mahabala Marla; Deputy Mayor Kavitha; DC A B Ibrahim and Commissioner Gokul Das attended the meeting along with corporators and social activists and street vendors’ leaders from across the country.

Town Vending Committees (TVCs) have been constituted in all the ULBs. Ms. Manjula also brought to the notice that draft rules have already been prepared and submitted to the government. Hon’ble minister Mr. Vinay Kumar Sorake said that street vendors can carry out their business without any fear or harassment from authorities with the ID cards. Present on the occasion MLA JR Lobo said that authorities should take utmost care while rehabilitating the street vendors. He emphasized on sensitizing the elected representatives on the Act. Speaking on the occasion National Coordinator, NASVI, Mr Arbind Singh said that the central Act for street vendors is a huge relief to those who are involved in street vending as it secures the right to livelihood to all vendors. He stressed that while creating vending zones the entire city should be taken into consideration with a focus on natural markets. Mr. Singh also emphasized on professionalizing of street food.

#2014PROGRESS IN THE IMPLEMENTATION OF THE STREET VENDORS ACT