A Harsh view from the Sidewalk 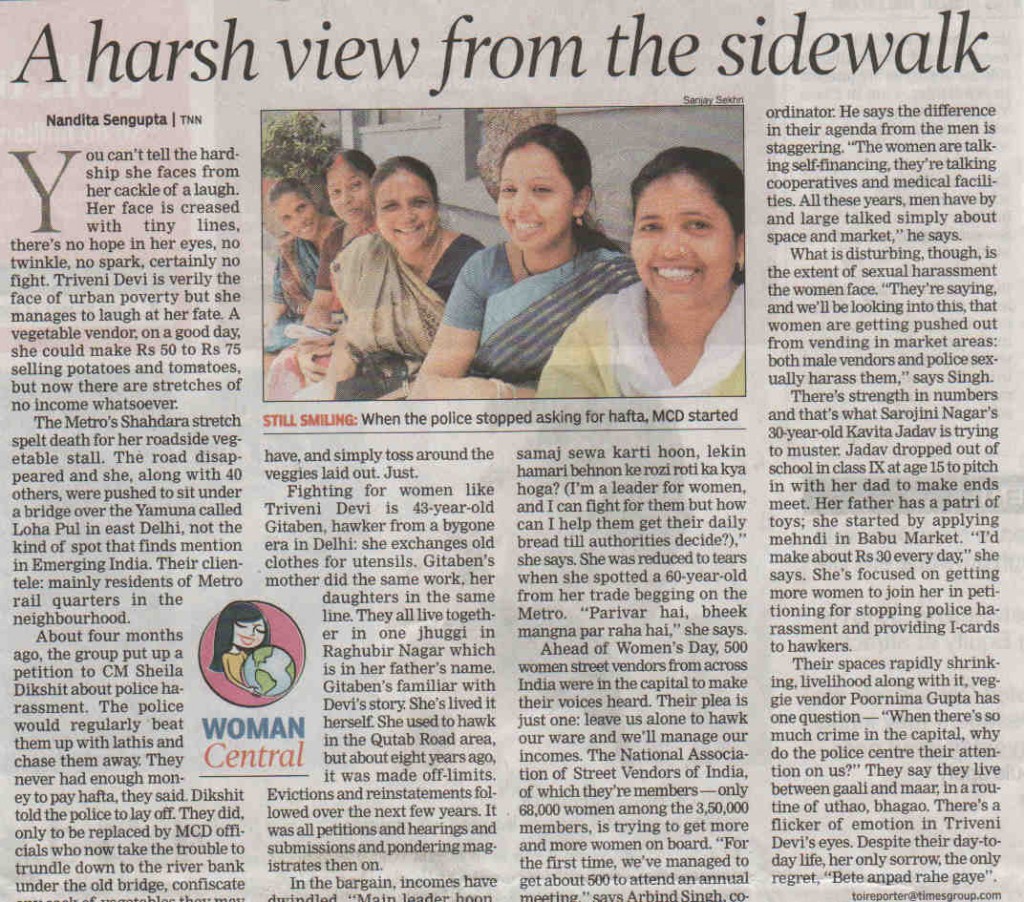 You can’t tell the hardship she faces from her cackle of a laugh. Her face is creased with tiny lines, there’s no hope in her eyes, no twinkle, no spark, certainly no fight. Triveni Devi is verily the face of urban poverty but she manages to laugh at her fate. A vegetable vendor, on a good day, she could make Rs 50 to Rs 75 selling potatoes and tomatoes, but now there are stretches of no income whatsoever. The Metro’s Shahdara stretch spelt death for her roadside vegetable stall. The road disappeared and she, along with 40 others, were pushed to sit under a bridge over the Yamuna called Loha Pul in east Delhi, not the kind of spot that finds mention in Emerging India. Their clientele: mainly residents of Metro rail quarters in the neighbourhood.

About four months ago, the group put up a petition to CM Sheila Dikshit about police harassment. The police would regularly beat them up with lathis and chase them away. They never had enough money to pay hafta, they said. Dikshit told the police to lay off. They did, only to be replaced by MCD officials who now take the trouble to trundle down to the river bank under the old bridge, confiscate any sack of vegetables they may have, and simply toss around the veggies laid out.
Fighting for women like Triveni Devi is 43-year-old Gitaben, hawker from a bygone era in Delhi: she exchanges old clothes for utensils. Gitaben’s mother did the same work, her daughters in the same line. They all live together in one jhuggi in Raghubir Nagar which is in her father’s name. Gitaben’s familiar with Devi’s story. She’s lived it herself. She used to hawk in the Qutab Road area, but about eight years ago, it was made off-limits. Evictions and reinstatements followed over the next few years. It was all petitions and hearings and submissions and pondering magistrates then on.

In the bargain, incomes have dwindled. “Main leader hoon, samaj sewa karti hoon, lekin hamari behnon ke rozi roti ka kya hoga? (I’m a leader for women, and I can fight for them but how can I help them get their daily bread till authorities decide?),” she says. She was reduced to tears when she spotted a 60-year-old from her trade begging on the Metro. “Parivar hai, bheek mangna par raha hai,” she says.

Ahead of Women’s Day, 500 women street vendors from across India were in the capital to make their voices heard. Their plea is just one: leave us alone to hawk our ware and we’ll manage our incomes. The National Association of Street Vendors of India, of which they’re members only 68,000 women among the 3,50,000 members, is trying to get more and more women on board. “For the first time, we’ve managed to get about 500 to attend an annual meeting,” says Arbind Singh, coordinator. He says the difference in their agenda from the men is staggering. “The women are talking self-financing, they’re talking cooperatives and medical facilities. All these years, men have by and large talked simply about space and market,” he says.

What is disturbing, though, is the extent of sexual harassment the women face. “They’re saying, and we’ll be looking into this, that women are getting pushed out from vending in market areas: both male vendors and the police sexually harass them,” says Singh.

There’s strength in numbers and that’s what Sarojini Nagar’s 30-year-old Kavita Jadav is trying to muster. Jadav dropped out of school in class IX at age 15 to pitch in with her dad to make ends meet. Her father has a patri of toys; she started by applying mehndi in Babu Market. “I’d make about Rs 30 every day,” she says. She’s focused on getting more women to join her in petitioning for stopping police harassment and providing I-cards to hawkers.

Their spaces rapidly shrinking, livelihood along with it, veggie vendor Poornima Gupta has one question “When there’s so much crime in the capital, why do the police centre their attention on us?” They say they live between gaali and maar, in a routine of uthao, bhagao. There’s a flicker of emotion in Triveni Devi’s eyes. Despite their day-to-day life, her only sorrow, the only regret, “Bete anpad rahe gaye”.