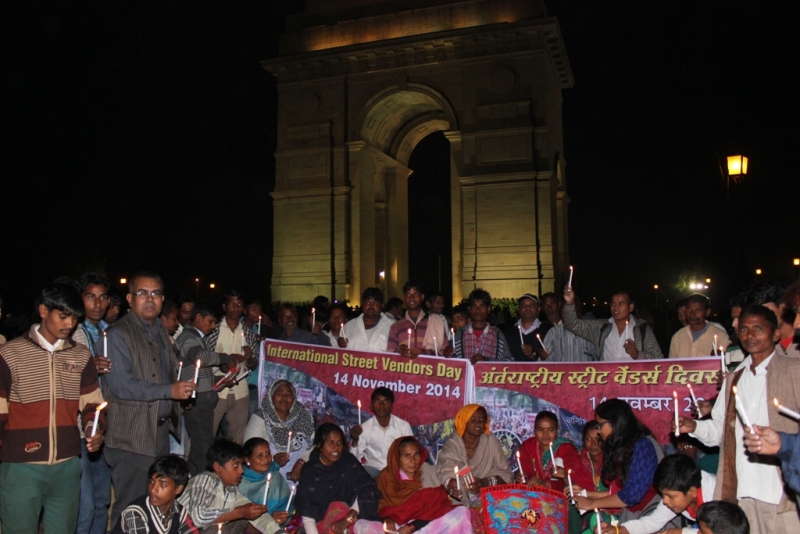 The international solidarity action held on Friday also marked the twelfth anniversary of the inception of StreetNet, a global collective of street vendors’ organizations working in Latin America, Africa and Asia. NASVI is the Asia focal point of StreetNet.

The street vendors in Delhi held a candlelight vigil and formed human chains at historic India Gate celebrating the contribution of street vendors to national economies as well as the society at large. The theme of the celebration was Proper implementation of Street Vendors Act 2014.

Addressing the vendors at the India Gate, NASVI national coordinator Arbind Singh said that the International Street Vendors Day will be a source of inspirational energy for the organizations working for livelihood democracy and participative democracy of millions of street vendors in numerous countries.

The day will also assist the movement for national legislations in different countries specifically Asia continent. We are proud that in India the day comes when the struggle of street vendors of India under the banner of NASVI has yielded positive results and the Indian Government has enacted a national Act 2014 to protect livelihood and social security rights of street vendors”, NASVI national coordinator said.

Ms. Anuradha Singh, Program Manager and Head of Delhi State, highlighted the role played by NASVI for the protection the rights of Street vendors in India. She described it as an opportunity to bring street vendors together across the globe and realize that we have common challenges and needs. At national level, the NASVI affiliates are holding events, marches and meetings to mark the day.