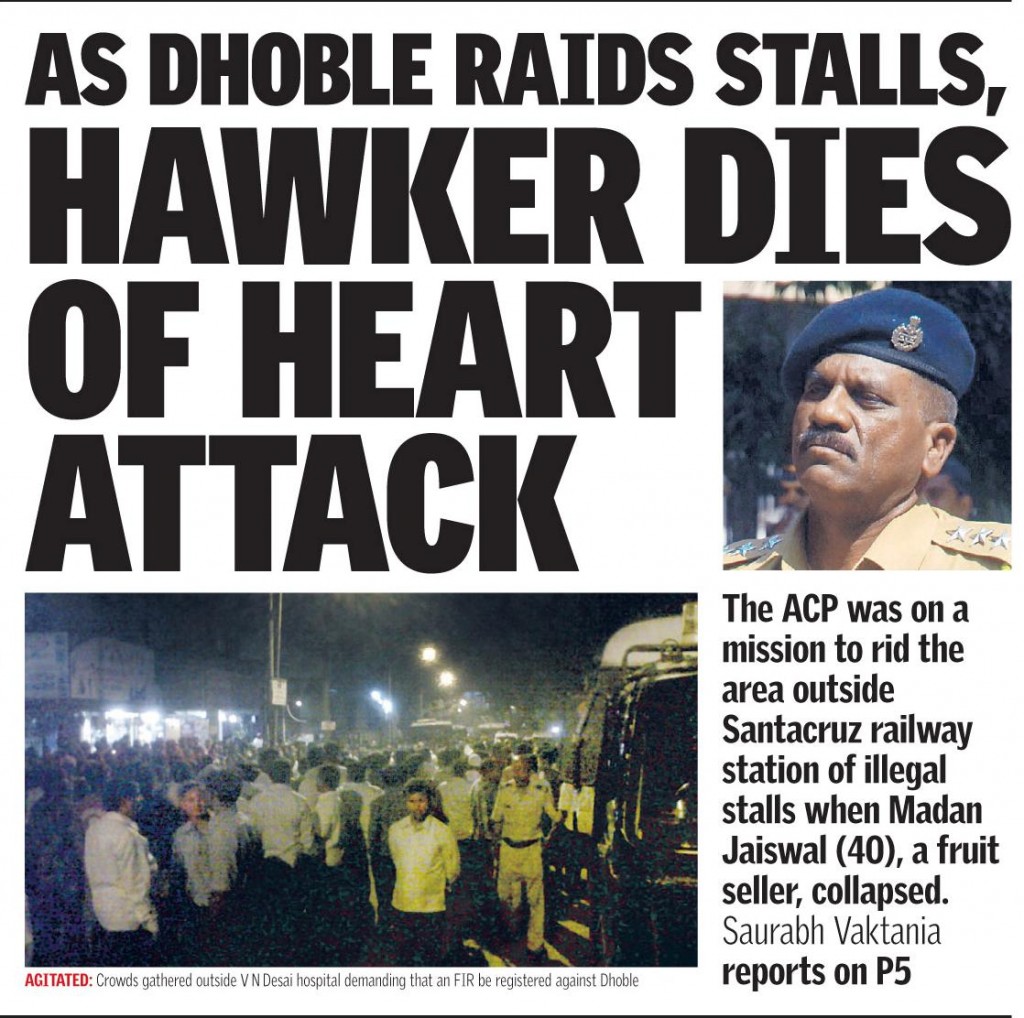 NASVI protests death of street vendor in Mumbai during police crackdown and demands institution of murder charges against infamous ACP Vasant Dhoble and compensation of Rs. 25 lakh to the family of the deceased

National Association of Street Vendors of India (NASVI) and its Mumbai based affiliate Azad Hawkers’ Union on Saturday strongly protested the death of a forty five year old fruit vendor Madan Jaiswal during brutal forced eviction of vendors and hawkers in Mumbai and demanded immediate institution of murder charges against infamous ACP of the Vakola division in Mumbai Vasant Dhoble and the compensation of Rs. 25 lakh from the state government to the family of the deceased.

NASVI has also sent letters with above demands to the Union Home Minister, Union Home Secretary, Union Minister of Housing and Urban Poverty Alleviation, Maharashtra Chief Minister, Maharashtra Home Minister and Mumbai Police Chief as well as the National Human Rights Commission. The organization has called upon the street vendors’ organizations to protest the ongoing police terror in Mumbai, Delhi and several other cities and towns of the country.

Strongly condemning the forced eviction of vendors and hawkers in areas near Santacruz station by the police led by the ACP Vasant Dhoble, NASVI national coordinator Arbind Singh said here in Delhi that the death of fruit vendor was not a natural death as the police and the medical authorities tried to rumour, rather it was police crackdown triggered killing of a working poor who was earning his livelihood at the site for last twenty years.

Mr. Singh demanded of the Union Home Ministry and the Maharashtra Government to ensure immediate sacking of the ACP and institution of the charge of the murder against him. NASVI coordinator also demanded adequate compensation from the state government to the family of the deceased.

NASVI national coordinator expressed serious concern over the fact that though there is a National Policy for Urban Street Vendors and the Central Government is in the process of bringing in a central law to protect the livelihood and social security rights of street vendors as mandated by the Supreme Court of India, the Mumbai Police and Mumbai Municipal Corporation are adopting a very hostile approach towards street vendors and  forcefully evicting them without any  time bound plan for resettlement.

Mr. Singh called upon the street vendors’ organizations to protest the ongoing police terror in Mumbai, Delhi and several other cities and towns of the country.

NASVI, an all India platform of street vendors’ organizations, described the Mumbai ACP as a notorious police officer having severe class biases against the working poor. Last year in September also, he had raided street food vendors in Vakola area and had booked several vendors who had refused to pay him protection money.

According to NASVI, there are many cases of corruption and crime pending against the ACP in Pune and Mumbai. He was suspended in 1989 for accepting bribe in Pune. In 1994, he was sentenced to seven years in prison and fined a lakh for his role in a custodial death. Then he was dismissed, but reinstated later in 1996 due to his garnering support from heavyweight politicians.  Recently he was shifted from Mumbai Police’s Special Services Branch after a controversial tenure.