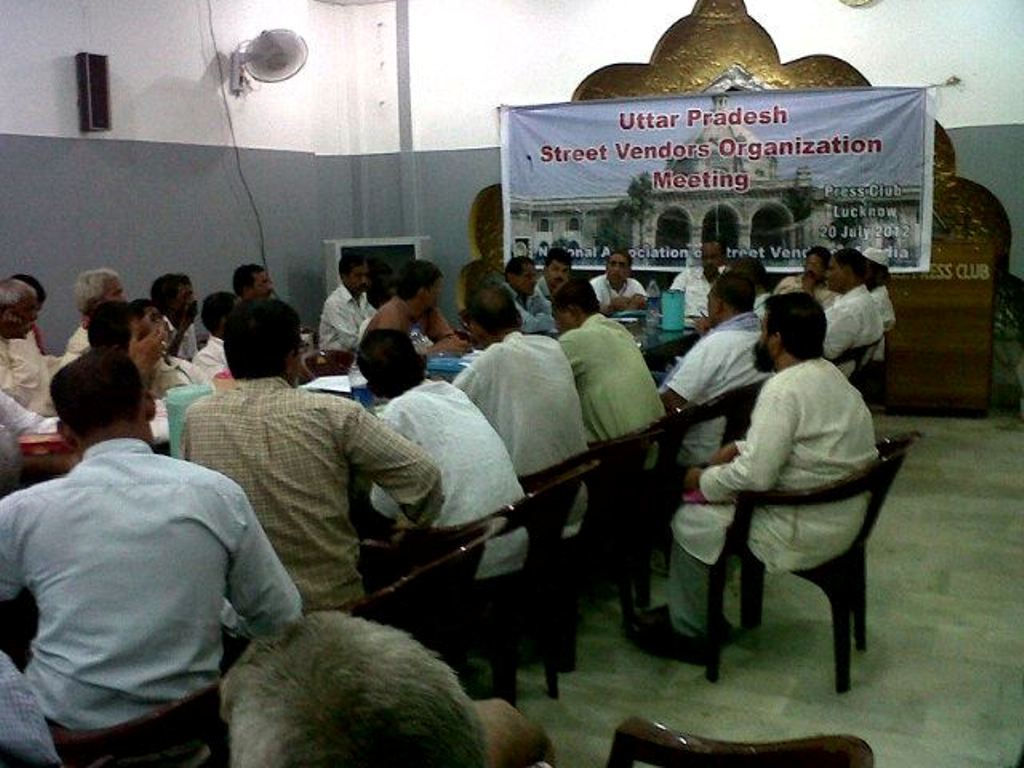 After planning and preparations running for months, NASVI affiliates in Uttar Pradesh formed a state level street vendors’ body to spearhead the vendors’ livelihood movement in the state. The name of the body is Uttar Pradesh Patri Dukandaar Samanavay Samiti. The independent body was formed in a meeting held on 20 July, 2012 at Press Club in Lucknow. The meeting was attended by representatives of approximately 44 street vendors’ organizations across the state.

The street vendor representatives shared their issues and concerns and talked about the problems as well as the challenges that they had been facing in different municipal areas. They, in particular, analyzed the urban development situation developing in the state after formation of new government, took stock of the municipal governance and firmed up strategies to cope up with the situation..

Joining the meeting NASVI National Coordinator Arbind Singh shared how the campaign for getting central law developed and how the National Advisory Council headed by UPA Chairperson Sonia Gandhi and the Ministry for Housing and Urban Poverty Alleviation were influenced to bring in Bill for central law. He said that the Ministry of Law and Justice had cleared the Draft Bill and it is now slated to be placed in the Cabinet for its approval before the Bill is placed in the Parliament.

He said, “Once central law is enacted, we would again return to the states for law implementation. But, the main question is about the strengthening of organizations in different states including UP. If strong democratic and accountable organization would not be there in each city and independent state structure would not be in place, neither implementation of law would be possible nor would the vendors be able to fetch the benefits which the changing cities are providing”.

The memorandum with charter of demands submitted to the Secretary notes, “. The lack of adequate legal provisions and the absence of integrative urban planning are making street vendors very vulnerable in different towns and cities in Uttar Pradesh. Though there is National Policy for Street Vendors, several judicial orders and pronouncements in favour of street vendors, the vendors in Uttar Pradesh are having a very tough time. They are bearing the brunt of municipal authorities and police in several districts and urban centers of the state”.

It adds, “Though the system of bidding and auction for collection toll/fees for allocation of place for vending is against the National Policy for Street Vendors, 2004 and 2009 and the Uttar Pradesh Government itself had abolished the system of bidding and auction way back in 2006, several municipal bodies including Bulandshahr Municipal Council are adopting the bidding and auction system. Such a system not only deprives the street vendors of their rights and entitlements, but also creates lack of orderliness, trouble, tension and crime. The situation in Bulandshahr in the wake of municipal council giving contract system to a mafia turned contractor is very alarming and it needs urgent intervention from your office”.

The petition further adds, “We strongly believe that as cities and towns are growing, many opportunities and challenges are also coming up before the street vendors. The Urban Department and the municipal bodies should create adequate spaces and put in legal provisions to enable vendors avail the opportunities”.

The memorandum demanded of the Secretary to write to all Municipal Commissioners and Executive Officers as well as chiefs of urban bodies to ensure that the livelihood right of street vendors is protected and institutional mechanisms are created to build harmonized direct relationship between the urban bodies and the street vendors without any middlemen/contractor-ship.

The meeting proved useful and productive as the Secretary promised to take up policy initiatives to safeguard the rights of street vendors.

After calling on the Urban Development Secretary, the delegation also met Shri Abhishek Mishra, the Protocol Minister of Uttar Pradesh and urged him to create a supportive environment wherein the street vendors could be able to earn a descent living.

A delegation would also meet the Uttar Pradesh Chief Minister soon to apprise him with the burning issues of street vendors.