Massive Protest by Street Vendors at all Municipal Bodies in Delhi 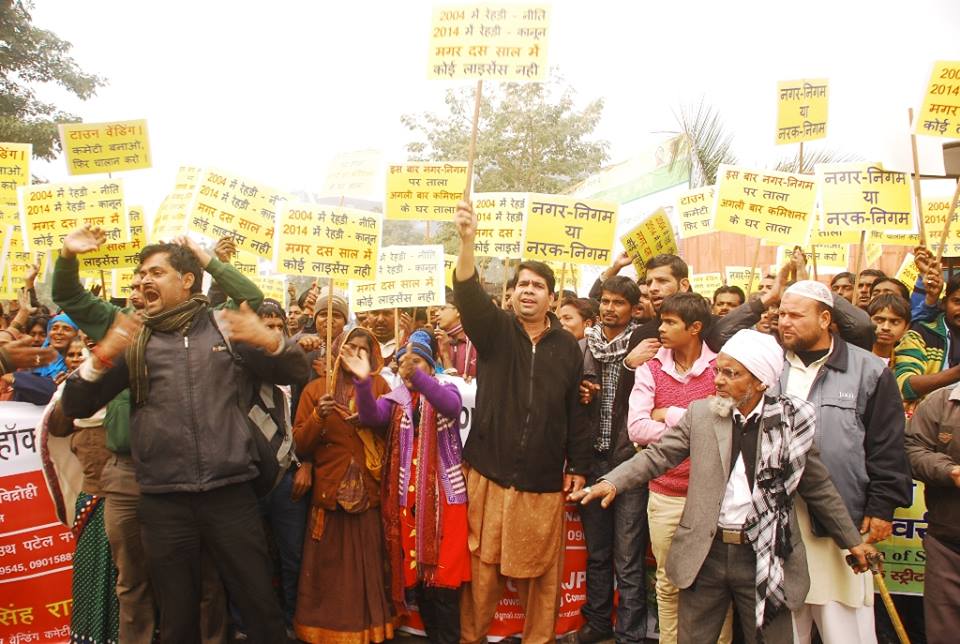 Massive Protest by Street Vendors at all Municipal Bodies in Delhi

Commissioner Promised Not to Issue Challan and Harass Street Vendors

Survey to begin within a month

NEW DELHI :20TH JANUARY  Thousands of Street Vendors from different markets of Delhi marched in different groups to the three  Municipal Corporation offices in Delhi demanding immediate  stop to issue of challans on  frivolous and many a times no grounds. They marched to the Civic Centre, NDMC Palika Kendra and Udogsadan where offices of the four Municipal Bodies are located and demanded immediate survey of street vendors. Thereafter they locked the gates of theseCorporations shouting NAGAR NIGAMS ARE NARAK NIGAMS.

Addressing the Street Vendors on the occasion, the National Co-ordinator of NASVI said that the vendors have suffered enormously due to inaction by the Municipal Bodies .Citing examples he said that there are cases where a single vendor has to pay Rs 800 a day just to vend .How is it expected of him to change his and his family members life when all the money earned is drained?

It must be mentioned that it was on 20th January 2004 that the Govt of India adopted the National Policy .Since then Vendors celebrate 20 January as Vendors Day. But for a vendor of Delhi there is nothing to celebrate .Only heaps of abuses, physical harm, extortion, forced taking away of goods and so on. Only Formalization would have changed this.

Mr Arbind Singh pointed out that due to consistent appeal to the Police Commissioner the Delhi Police is regularly giving advertisement asking vendors to file complaints against Staff if they ask money, or harass or threaten .However the Municipal Bodies are yet to rise to the occasion .They just keep finding one excuse or the other and do not even adhere to Court judgments Thus Despite continuous perusal and consistent pressure from all quarters i.e., Judiciary, Associations of Street Vendors, Government, regulations of street vendors of Delhi is not at all taken seriously by Municipal Bodies.

Beginning with 2004 National Policy on Urban Street Vendors to 2014 Central Act for the street vendors, Municipal Bodies of Delhi have only obstructed and used delay tacticsjust not to regulate Street Vendors. It must be mentioned that immediately after the adoption of National Policy, the then Municipal Corporation of Delhi (MCD) was the first Municipal Body to adopt the National Policy. Many formalities like constitution of Town Vending Committees, Zonal Committees, Ward Vending Committees were done but not a single vendor was issued a vending certificate in all the ten years. Vendors continued to rely on judiciary and many middlemen fleeced vendors of money just to get some court order  ,As such street vendors are continued to be extorted protection money by numerous agencies ,harassed, beaten up, their goods confiscated, burnt and markets evicted. Judicial pronouncements in favour of street vendors have also failed to move them.

Pointing to the deplorable situation, Mr Arbind Singh, National Co-ordinator said” As such street vendors were left with no option but to protest at Municipal Bodies offices in Delhi. We decided 20th January 2015 because it was on 20th January 2004 that the first Policy of Street Vendors was announced and more than a decade has passed without even lip service provided by the Municipal Bodies of Delhi. They are not NAGAR NIGAM but NAARAK NIGAM.”

After listening to the tales of exploitation and plight of street vendors in a huge Protest, the Municipal Commissioner of North and South Delhi, Chairperson of NDMC, assured NASVI delegation that the rights and entitlements would be protected at all costs; they also assured that now onwards no Challan will be issued against the vendor till survey is complete.

However NASVI Coordinator Arbind Singh said that if the survey doesn’t start within month time, Vendors will be forced to take necessary action.